Wet and Winded. Not to mention all hilled out! Cycling from Margaret River to Pemberton

Some curious Margaret River Tourist park residents idled past as we packed up the tent and loaded the bikes. This ritual was more than enough entertainment for some of them for a while. 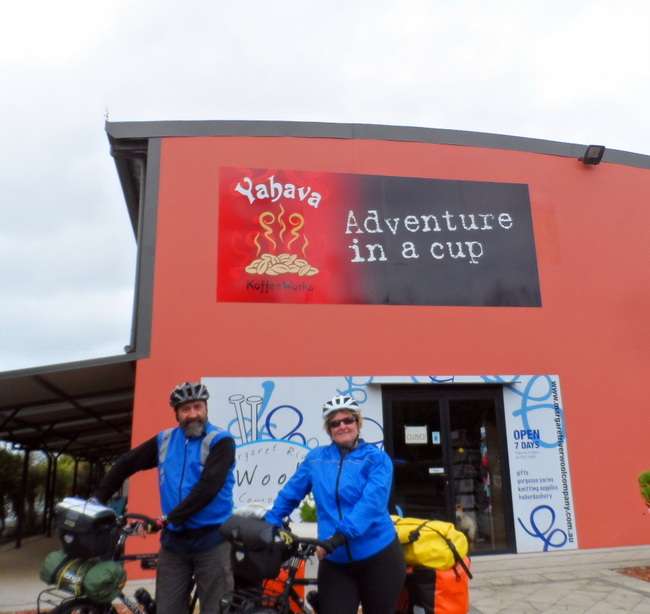 Out on the Bussel Highway is was quiet. Sunday services, for those who had them, meant a clear run down to the corner of Rosa Brook Road and a half hour stop at Yahava Coffee where the lovely Harriet grinds some mighty fine beans. 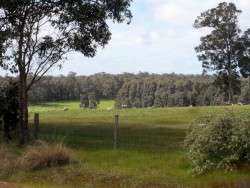 The weather had cleared up and the sun had made a most welcome return, we were thriving with the warmth on our backs and the lush countryside rolling by.

About 8 or 9 kms out we began a long descent of about 3kms. This was a bit ominous as we all know “what goes down must go up too!! Thus began the story of the rest of our day – lots of rolling hills and head winds. We’d try our best to push hard down one side to gather some speed to ascend the next one, but alas, we would always need to gear down and pump the pegs hard. We did pretty good mind, but by the time we reached Sue’s Bridge campsite for lunch we were almost spent. We were almost out of water too, so we filled up out of a rainwater tank which was signed  “not for drinking” – we’re still here though, so I guess it was fine.

It was another 21kms to the roadside parking area we’d chosen but once we’d finally gotten onto the Brockman Highway the hills relented and at 3.45pm we pulled into our campsite for the night. The parking area had a longdrop toilet and picnic tables set back in their own secluded areas. We chose one up the back and pitched the  tent behind a table and locked and covered the girls for the night. Having the table to ourselves for the night was an unexpected luxury and we soon got out our cooking gear and made “Cheesy Rice” for tea. 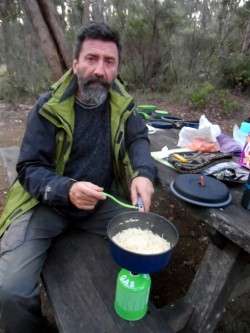 We awoke at 7am and our bodies groaned as we got out of the tent and made a cuppa for breakfast. We were discovering muscles we never thought we had. My (Tim) hamstring had cramped in the night and nearly had me screaming in pain.

After a bit of stretching  we got away reasonably early at 8.25am ( a new record. the minute we got out on the highway we were slapped on the back by a rigid North Westerly that propelled us down Stewart’s Road at an average speed of 20kmph (including a couple of steep up hills at the beginning and end). With a strong tail wind we hooted up and down the hills this time and figured we’d be in Pemberton by 1 pm with a cold beer in our hands.

Oh how things change – And QUICKLY!!!! Just as we reached the junction of Stewart’s Road and the Vasse Highway it began to rain. 5 minutes earlier it was sunny skies and happy days – now we were crawling up hills into driving rain going sideways. On top of the rain the hills were getting bigger and longer. All of a sudden this had become dangerous, with no shoulder on the road and no shortage of caravans we decided to pull over into Donnelly River Winery for a hot drink and wait it out. Russell was running the cellar door tastings and was pretty surprised to see us. We must have looked pretty crook by then because he started the generator so we could have some tea. The rain and winds had taken out the power lines and he’d been sitting in the dark by himself. After half an hour the rain had gotten stronger and the nearby dam had advanced a full metre towards us. There was only one thing to do – taste free wine!!!! Shazz managed to sample 5 or 6 reds but I stuck to a couple of sweet ones mindful of what was to come.

After about an hour it was clear it wasn’t going to let up and we couldn’t spend the night wine tasting at Donnelly River, as tempting as that seemed at the time. So we got out all of our wet gear, said goodbye to Russell (who thought we were mad!!!) and proceeded to climb the biggest hill so far – directly outside their gate. 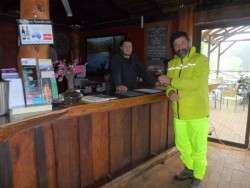 So, completely soaked by rain, our feet and hands freezing, trucks and caravans hurtling by us, we proceeded to crawl the next 30kms to Pemberton. The driving rain made our clear glasses unusable ( and dangerous) and it waterlogged all of our clothing and made us even heavier when trying to climb uphill. After the previous day’s efforts on the hills, we eventually got to a point where our legs just couldn’t do it anymore. So, on the longer hills, we would get as high as we could and then get off and walk. The trouble with walking the bikes though is they are heavy!! (About 40kgs). This actually takes more effort out of your legs and lungs than cycling. All in all we probably walked uphill about  3kms, resting at the top of the hills and rolling back down with hardly enough energy to pedal. 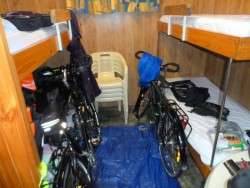 I think we were watching each other and looking for signs of cracking. We were miles away from where we were going. We were cold and wet without any sign of the weather letting up and the hills were just relentless. We were almost out of steam, but somehow we just kept calm and steeled ourselves. I have to say I’m pretty proud of our “Never say die” attitude. We had a long, long way to go and a day like today could break your spirit and make you question your chances out there. Rolling down the last hill into Pemberton I knew we’d done something special. We’d passed a test, we’d earned a stripe, and we knew it. We now know we’ve got a lot of km’s in us yet…although there’s no way in hell we were pitching the tent tonight. A cabin and a day off – and a beer and a steak and a wine and a soft bed……..We hit the forests of the South West and we need to recuperate before we set off.