Its not all beer and skittles on this bike ride!!! – Cycling from Bunbury to Margaret River 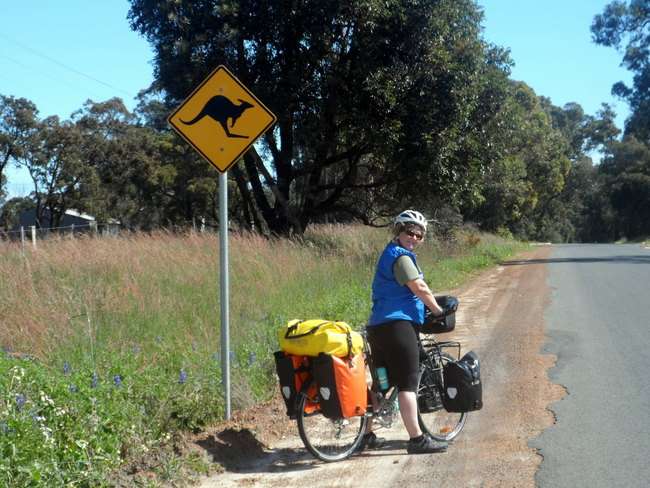 Well, after a disastrous result in the footy finals we’d watched in Bunbury (from my perspective at least), we were ready to ship out. There was no hurry to leave early as Bussleton was only about 50kms away according to the GPS and we had plotted a path through the back roads so we didn’t have to mix it with the trucks. We haven’t given a detailed description of the route because it\’s easy to replicate by putting the start and end points in and hitting the “by bicycle” option.

It was pretty slow going on the bike paths and we were happy when we headed off into the back streets of some of the newer developments. We were motoring along until we came to an abrupt halt. The through road “Miningup” that was to lead us through to the Estuary came to a dead end. A surveyor, working in the area told us it had been gazetted to go straight through BUT (obviously!!!) that hadn’t happened yet. Our only option was to head back up to the highway and follow that for 10kms before heading inland again on Roberts Road to the back roads.

The highway in that area is abysmal for cyclists. There is literally 6 inches of shoulder on the single lane highway and a 100km limit ….with a RIPPLE STRIP edging the road.  Hit that with a car or truck passing and you’d end up road kill. There was nothing else for us to do but get onto the side in the gravel and gingerly ride for about 4kms before we got a decent shoulder again. That’s no easy task with about 25kgs of gear on the bike. 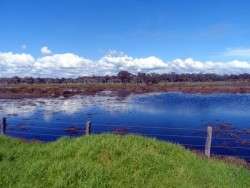 We finally reached our turn off and the whole experience turned upside down for the better. Glorious rural scenery on both sides. Birdlife teemed in the Leschenault Estuary and the sun came out to warm our way. But best of all there was no traffic. 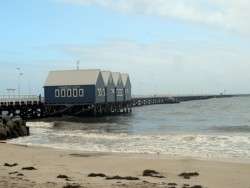 By the time we got to Bussleton and booked into the Kookaburra Campground ($34/night unpowered site) the weather was looking ominous again. It had been the same last time I had visited in December 2005. On that occasion I’d been competing in the Ironman race and both the swim and the bike legs had been a real challenge because of the shabby weather. Maybe it was just me. All the pictures in the travel brochures showed brilliant sunshine. The Esplanade hotel had $10 steaks on Mondays so it didn’t take much persuasion to take advantage of that rather than cook our own in the wind and rain. It was an enormous meal and after a couple of refreshing beverages we were ready for bed. The weather predictions for the following day were pretty horrendous but we’d been lucky so far. 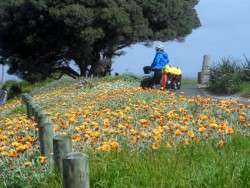 Rather than ride all the way into Margaret River, we’d worked out that there was an excellent concentration of wineries, breweries and producers of local fare in the area surrounding the Cowaramup Campsite. Taunton’s is a working farm around 5km north of the village and is a great place for those with kids. Animal feeding and a “Bouncy pillow” add to the attractions for those under 12.

The route we took, courtesy of Google maps (cycling option) had us peddling out of Bussleton on the coastal cycling path then spending just a few kms on the highway before turning left onto Kaloorup Road. We then spent the next couple of hours winding our way up and down hills towards Roy Road and then back onto the highway. It was our first day of real hills and by the time we arrived at the campground the quads were letting us know all about it. Our luck had held with the weather and all the black clouds had seemed to hover in the distance. The wind was pretty wicked but had seemed to be at our backs or sideways for much of the ride. However, the weather predictions for the next day were abysmal. If we were going to see anything in the area we had to go that afternoon. 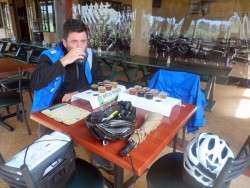 Tim had the Bootleg Brewery high on his list so we decided to head out the 13kms to take a look and partake of their wares. We had the wind in our face much of the way and the hills were pretty steep but at least that meant the wind would be helping us out on the way back. By the time we got there we’d worked up a real thirst. We sorted that quick smart with a tasting platter each for $15. They made some wicked wheat beers and a great Pale Ale but my favourite (and I’ve been drinking it ever since to the detriment of my liver!!) was the Raging Bull (7.1%). It has a smooth chocolaty flavor that lines the throat and warms the cockles. Yummmm. The drinks along with the tail wind gave us wings on the way back. What had taken us an hour on the way out, took a mere 40 minutes on the way home, even with a mixed 6 pack added to the panniers. And…..the weather had held although not for much longer. We threw together a meal of tuna and pasta from the emergency ration and after a couple of beers we headed for the tent. 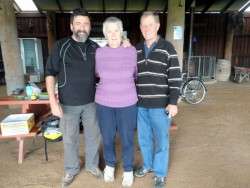 As we settled into the tent for the night the rain started to fall. Then the wind came up and the thunder and lightening took the whole “camping in adverse conditions” description to a whole new level. My biggest fear was a tree being blown onto the tent but we survived the night and awoke to a huge puddle encroaching on our space. As we keep the heavy panniers in the vestibules at the ends of the tents it was an easy manner to simply pick it up and move it to higher ground. We had attracted the sympathy of a number of the inhabitants of the campground and the lovely Doug and Leslie from Victoria offered to take us into Margaret River to pick up some supplies. That served a couple of purposes…Firstly we got to have real food for dinner, picking up some steaks and vegies for the BBQ and secondly we got a look at the hills and lack of shoulder on the main road. We’d heard about a rail trail to Margaret River from Cowaramup village itself and that was looking like a good option at that stage. It had been a long time since we’d seen weather that bad. The wind was absolutely phenomenal, gusting in all directions and the rain was schizophrenic, pelting down one minute and the halting abruptly as the sun came out. Sometimes it was doing all three. 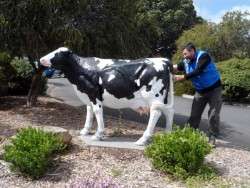 That evening we sat around chatting with some of the other travelers around a fire that had been built in the Barn (Kitchen camp) area. Doug and Lesley were retirees from Victoria and “The Deans” were a family with two young girls that had taken a term off to travel round Australia. The girls were still doing their schooling on the road and probably learning more than any school could ever teach them. It was lovely to meet people who were just out there doing it. It was definitely hard to tear ourselves away from the fire and crawl into the tent, which had performed admirably I might add. No leaks whatsoever and no ill effects from the wind. 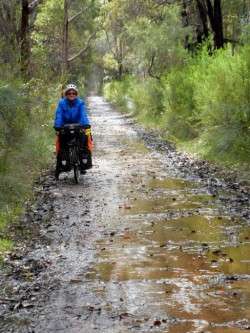 Unbelievably the weather had improved the next morning to the extent that we could actually get the tent dry before packing it away. We’d decided to ride into Margaret River and stay for the weekend as we hadn\’t really seen as much as we would have liked to. And the weather was predicted to be horrible over the weekend so we preferred to have some facilities rather than be bush camping on the way to Pemberton. The rail trail in was an experience with 4 or 5 inches of water over the trail in parts and lots of mud. A detour got us onto a walking path that got so narrow and steep in parts there was no choice but to walk the bikes.

The stay in Margaret River  proved to be an excellent decision. We got to do a ride around the immediate area and visit a few wineries while the weather held, and watch the footy finals in the comfort of the Settlers Tavern (which had Raging Bull on tap!!). We also had the use of the TV room and kitchen at the Campground as the rain and wind battered the whole area on the next day. Come rain, hail or snow we are leaving on Sunday. Fingers are crossed that the weather gods are more kind than they have been the past few days. 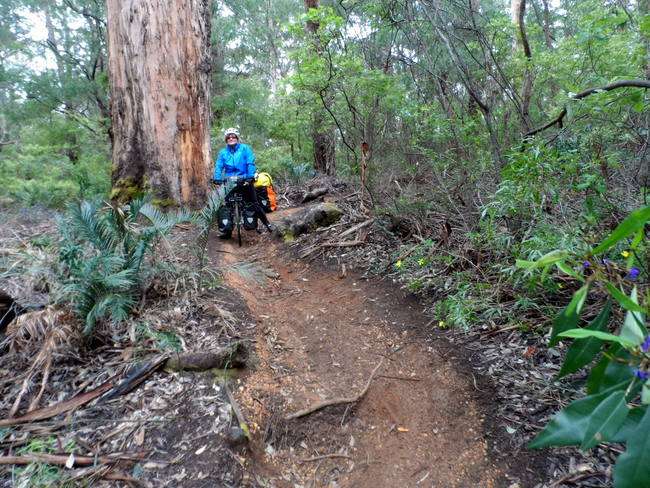 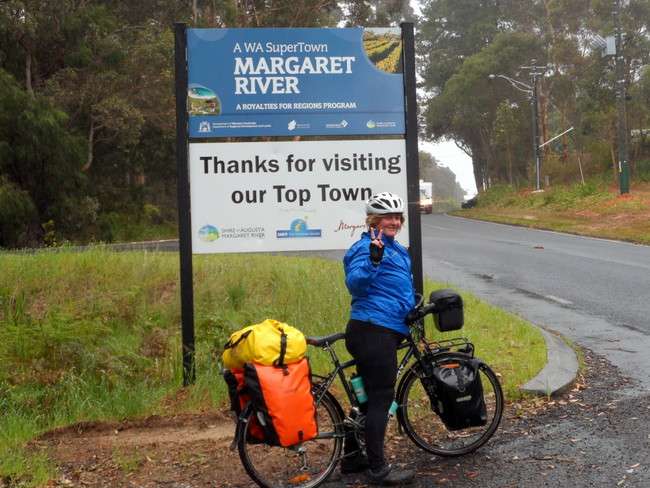 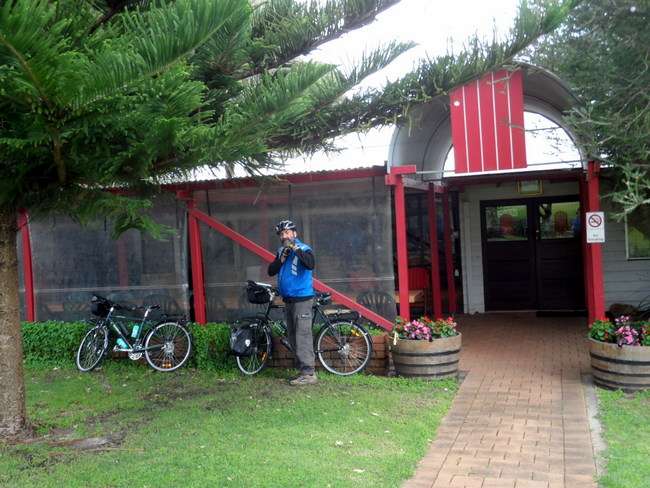 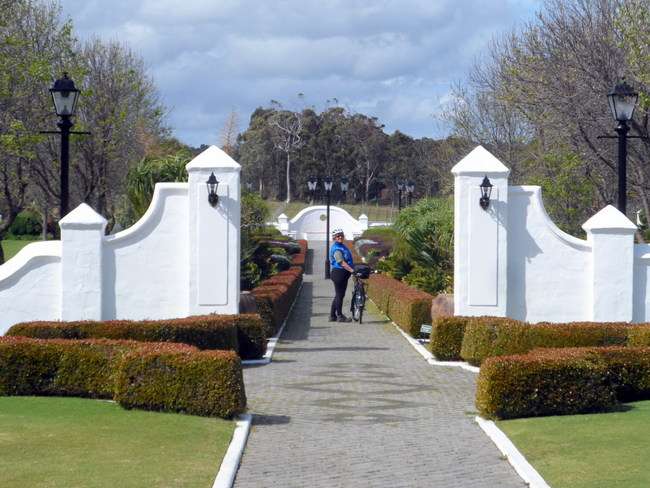 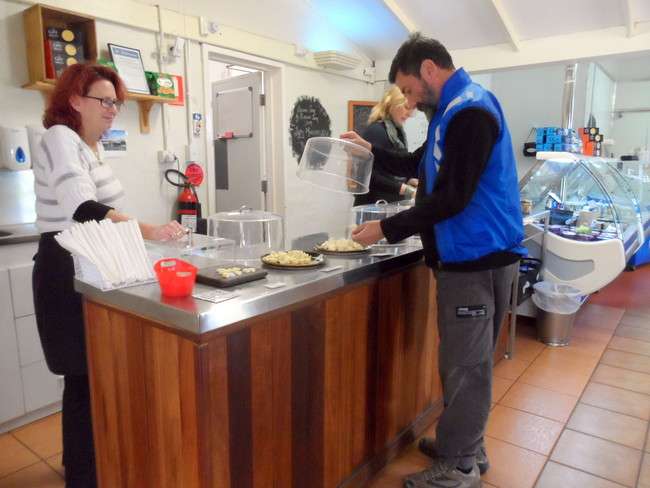