Back up that Damn Hill & 70km’s of Grunt!! Cycling from Pemberton to Fernhook Falls 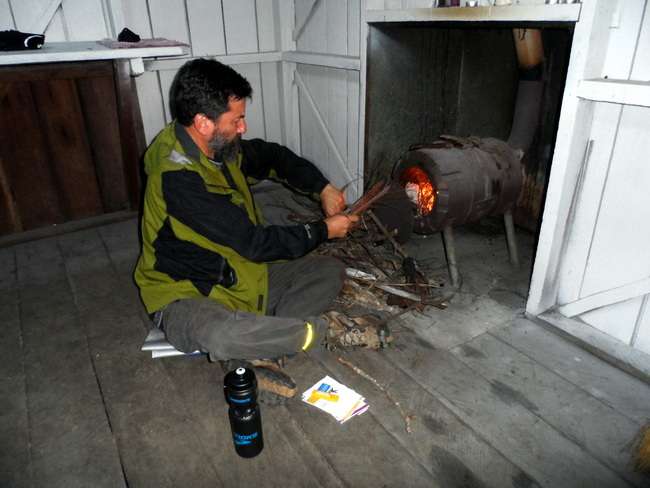 Two nights in a cabin in Pemberton gave us the opportunity to dry everything off and recharge our batteries (cameras/phones/computers and legs!!). As a warm and dry as it was in the cabin, outside sporadic sunshine was chased away quickly by wind and rain. We stripped and cleaned our bikes again and somehow managed to get the tent dry. In the meantime we tried to discern the best (and easiest) route to ride down to Walpole on the south coast about 110kms away. After speaking to a few locals and the helpful lady at the Visitor\’s Information Centre , it was decided to ride via Northcliffe. This meant revisiting the 3km uphill we\’d come down a couple of days before!!!

We awoke the next morning to squally conditions and light rain. It was almost enough to change our minds but we packed up and headed for a café to see if the weather would break. 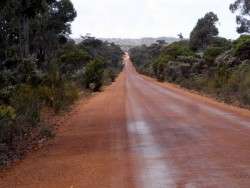 Arriving at the café, a patch of blue sky encouraged us to give it a go and try to make it up the range before the skies opened up again. We made it nearly half way up the hill before the stiff head wind unseated us and left us to walk the last 1.5kms to the top. It took us about 30 minutes to arrive at the information bay at the junction of the Vasse Highway we’d come down a couple of days previously. A sign said Northcliffe lay 27kms south of us

Shazz checked her phone and had a message from the lady at the caravan park back in Pemberton. She had apparently left her phone charger in the cabin. Fortunately the lady offered to drive it up to us as the thought of having to ride back down and then walk back up again didn’t amuse either of us. Shazz was sure she hadn\’t left it behind but was unsure what else it could be.

On top of the range, the wind was ripping through both of us and we quickly got cold while we waited for the woman to bring up the mystery item. After 15 minutes, she arrived with a bag of adaptors we’d left behind, none of which were any use to us now we were back in Australia. I guess it was our own fault that we hadn’t explained to anyone when we’d discarded them or thrown them away so they couldn’t be found. Anyway, we were very grateful to her for taking time out to bring them to us, promptly gifted them to her and were once again on our way. 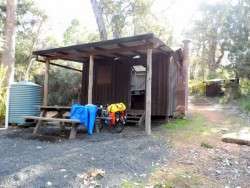 We didn’t have to wait long before we got drenched with driving rain. This time though, it hit us with brute force and was getting a bit too scary. We rode past a farmhouse a couple of hundred metres off the road and decided to go in and ask them for shelter til it blew over.

When we pulled up around the back of the house and called out, we saw that nobody was home but the place was wide open. A poodle made its way outside and greeted us with a wagging tail but there was no other sign of life except some penned sheep in the shed opposite. So, we stood with our bikes under their back verandah feeling a little bit like Goldilocks at the three bear’s house and waited out the rain. As soon as it broke we bolted up the drive and back out onto the Northcliffe road.

There was very little traffic to bother us for the rest of the ride and about 12.30pm we pulled into Northcliffe and headed to the Information Centre (by now our first choice destination in each town).

Sue, at the info centre was a mine of good information, suggesting we take a room at the pub across the road and showing us the most cycle friendly route to Walpole avoiding most of the traffic. At the pub, Natasha from Northern Ireland let me lock the bikes up at the back and we settled into a bumper counter lunch of a burger and fish and chips. 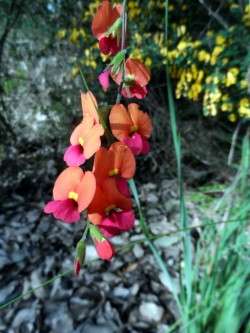 Northcliffe is quite small and we’d ridden past almost everything to see, so, with the weather turning nasty again, we retreated to the wood fire in the bar and chatted with the locals over a few pints. As with most of the other places we’ve visited  here in the South West – it’s not cheap. Our room, food and a few beers totaled up to $200. We couldn’t afford to stay here no matter what the weather did the next day!!!

It blew a gale all night and was raining fiercely when we awoke. It was a great temptation to just roll over and go back to sleep and try again tomorrow. We decided to go though – we figured we were going to get wet anyway so we might as well just suck it up and do it. Fortunately the rain lightened up considerably in the next hour and by the time we\’d loaded up and were ready to leave it had all but cleared with the promise of a Westerly tail wind.

We had decided to ride 70kms today and rather than break the trip at Shannon’s Campsite, we’d push on down to Fernhook Falls, another camp in the Frankland National Park.

We pushed along Middleton Road to the South West Highway, a 20km stretch of East- West road where we were expecting to be assisted by a good westerly wind. That didn’t turn out though and the hills had followed us too!! Once again, with quite a bit of effort, we chipped away at the constant ups, until finally we came out onto the South West Highway. 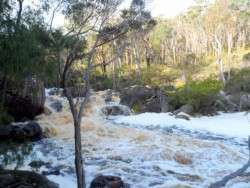 Shannon’s Campsite lay 5km south of us so we kept it moving along, looking forward to a rest and some lunch. We ended up skipping Shannon’s as it was 500m in off the road and elected to use the National Park day use Shelter opposite. We just needed somewhere to get out of the rain and to find some more water. Once again I refilled our bottles out of a tap marked “Not for Drinking” and we put in a purification tablet we’d picked up from the pharmacy in Pemberton.

As soon as a shower had passed and we’d eaten our sandwich, we got back on the road before we got cold again. Stopping for too long anywhere is a killer when you have to start again. Your legs just don’t want to work!!!! After another bunch of climbs, we eventually got the downhill run we were expecting (we were, after all, heading down to sea level!!!). It was a good 30kms though until we arrived at the gravel road turn off to Fernhook Falls. Beardmore Road was nothing more than a raised levy bank inundated by dark, tannin stained water on both sides. The 6km ride into the camp wasn’t too bad and the gravel held firm under our wheels for the most part. The sloping campsite tumbled down to the swollen Deep River – well named!! At the road bridge which crosses it (just up from the campsite) Fernhook Falls was exploding with brown, frothy flood waters that climbed high up the banks. The thick vegetation and abundant trees of the Karri Forest masked most of the sound though until you were almost on top of it. 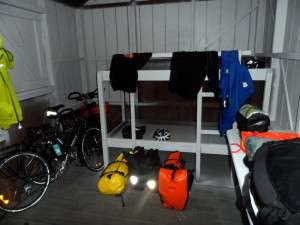 At the campsite it was 3pm and (first in best dressed!!) we had scored a hut for ourselves with bunk beds, an outside picnic table with a lean-to, and best of all, a fire stove. I soon began scouring the place for dry timber to get a fire going but that wasn’t too easy as it looked like the place hadn’t seen a sunny day in 6 months!!

We changed into some dry clothes, got the bikes inside and began preparing dinner – we were starving!! Fortunately the sun broke through and highlighted all the native shrubs that were out in bloom. Small wrens darted in the undergrowth looking for worms and bird song filled the air. Life was good again!

We got our sleeping bags out on the floor and slept in front of the hearth. It was so good to have a fire again and it seemed a very long time since Africa. We spent the night tossing and turning as the wind thrashed the trees over the cabin and the rain periodically pounded the roof. Not long before dawn, the thunder started in earnest. It seemed we were in for another character building day but hopefully we would be heading downhill.