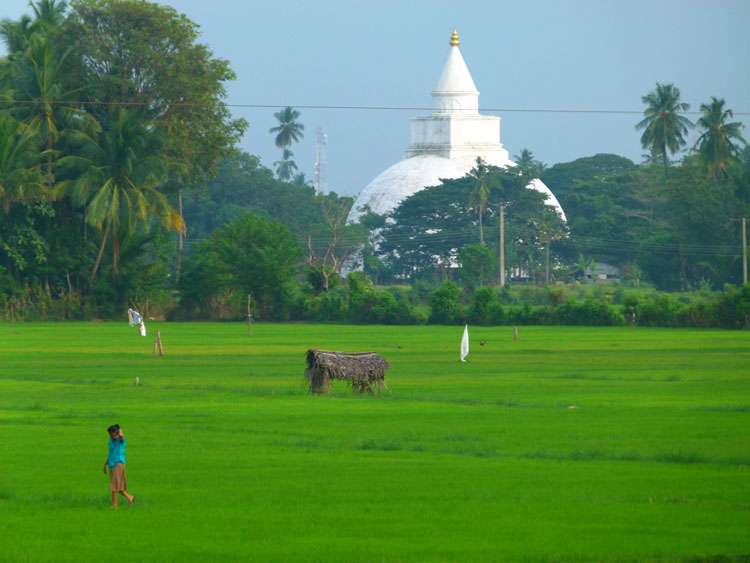 We managed to get seats on the bus again on our journey from Tangalle to Tissamaharama (Tissa), the gateway to Yala National Park. It definitely pays to get on at the starting point of the route. Once again the A2 follows the beaches along the southern coast. The busy seaside towns of Ambalantota and Hambantota fell steadily behind us and after about 2 and a half hours, courtesy of the GPS on Sharyn’s smartphone, we stopped the bus at the correct corner just outside Tissa’s city centre and walked a few hundred metres to our guesthouse. 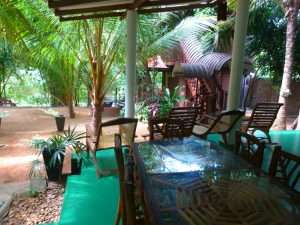 The tropical riverside setting of the River Face Inn.

The River Face Inn is situated in a beautiful, tropical garden setting on the bank of a small river on the edge of town. Our room overlooked the water with a huge glass window in place of a wall, framing the entire picture. Without curtains, large trees, vines and giant bamboo on the far bank ensured our privacy. Overhanging palms completed the scene, it was truly idyllic. The local birdlife presented itself almost immediately, even a pair of Pied Hornbills paid us a visit. We’d already made up our mind to book an extra day here, chill out and enjoy the nature on display.

Dilip and Teshan, the super friendly staff, made us juice and while they were taking down our details. They told us of a birdwatching tour around the nearby lakes at 4 pm – for FREE! 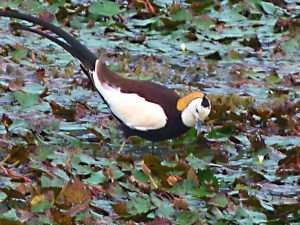 A Water Jacana wading around the edges of a lake.

Dilip drove us around the lakes in their specially fitted-out safari jeep, similar to the ones we’d been on in Africa. We drove around on the levee banks that keep the lake’s waters from flooding the surrounding rice paddies and villages. The place was teeming with birdlife and we even spotted a croc!

Back at the guesthouse, breakfast and an awesome dinner were included in the rate we booked. Cold beers were delivered to our doorstep so we could watch the river fade into darkness. Just bring plenty of mosquito repellent (although the staff placed plenty of mosquito coils around and lit a fire bucket).

Part of nature not entirely welcomed around here are the monkeys. They tend to get into everything and make off with food and possessions. The locals discourage them with everything from firecrackers to slingshots to move them on. The elderly patriarch of the family had his own tried and true method though, he promptly pulled out a rather antique rifle. We’re not sure if it worked or not, but the monkeys took one look and fled like startled gazelles! He didn’t even have to pull the trigger. 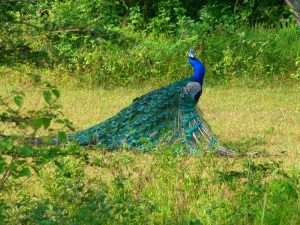 A Peacock in Yalla trying to impress a potential mate.

Like most visitors, we’d come to Tissa to visit the nearby Yala National Park, famed for its wildlife, including the largest population per sq km of leopards in the world, and a massive number of elephants. It was a 4 am start for us as we joined 4 others in the jeep and blazed off into the night at break-neck speed, narrowly avoiding several sleeping dogs on the way. This death-defying stunt driving was all in the name of being at the park gates first before the rest of the hundred or so jeeps got there. As you might be already aware, leopards are generally nocturnal and move under the cover of darkness to hunt. So, if we were going to see one, it would probably be early on in our 5-hour safari around the park and the lead jeeps would be best positioned. Also, having sighted a leopard, the tips increased significantly for the driver, hence the desperate, no-regard-for-anyone-or-anything driving. 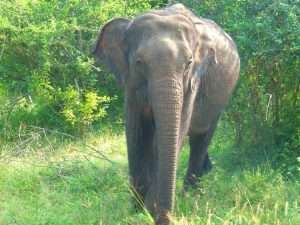 We finally found an Elephant!

The first hour and a half were randomly studded with the occasional sighting of peacocks and deer  – nothing to get excited about really. We did spy some elephant poo, so we knew we’d have to see one eventually. Having visited Africa four times, it would take nothing less than a leopard to make the park entry fee pay off though. Sure enough, our driver,  with his phone constantly glued to his ear, planted his foot and the chase was on!

The rally driving that ensured would not have been out of place at any stage of the Paris-Dakar, and everyone in the back got to chew on copious amounts of red dust while holding on for dear life as we overtook other jeeps whose drivers lacked the killer instinct. 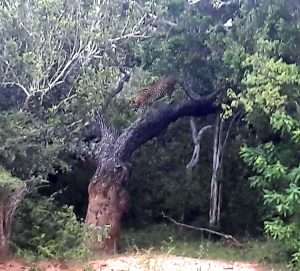 Our crappy sole pic of the leopard!

About 15 minutes later we arrived at the spot where a single leopard was conducting a sideshow for about nine other jeeps. Someone had gotten out of their jeep (I don’t know how good an idea that was!) and was conducting traffic past the spot so everyone could get a chance to see it.  Were we going to see our first leopard kill? Maybe not, but luck was on our side today. We had just pulled up in front of the spot and sighted the leopard on a large tree branch about 20-25m away. It was just enough time to have a look and get a snap before it stood up and gracefully exited the scene and into the thick scrub. The surprising thing was its size. These leopards, which are a sub-species and endemic to Sri Lanka, are much larger than their African cousins and have a yellow appearance, more like a tiger. 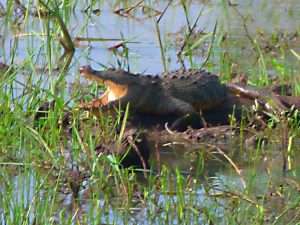 No swimming in Yala!

The rest of the jaunt was now going to pale in comparison for us all. We did manage to see 5 elephants (quite close up), a few crocodiles, a couple of wild boars and plenty more birdlife, including Sri Lanka’s national bird, the Jungle Fowl, a colourful rooster-type bird.

We were back at the guesthouse by lunchtime and pretty tired as well. We booked another day and sat back and relaxed. We were really enjoying this place.

The next day while Shazz worked, I took a walk to the bank. On the way, I got to watch a local cricket competition involving several teams. Once again a loudspeaker system howled out over Tissa as the game was being commentated live for everyone’s pleasure; whether you were interested or not! Players used a tennis ball and nobody had any padding on or protective gear. Standard footwear was rubber thongs (flip-flops) and the sun scattered the spectators and awaiting teams to the shade of the surrounding trees. It was a real slog-a-thon and wickets fell regularly and sixes were smashed over the road and into neighbouring properties. It was certainly entertaining stuff, but I was on a mission and didn’t hang around too long. 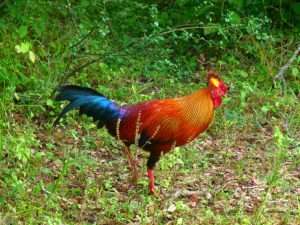 After asking a local where to find the bank, I was informed it was at least another 4kms. He then took me across the road to the bus stop and told me he’d show me which bus to take. In the meantime, a young guy on a motorbike pulled up. Some discussion took place and I was quickly on the back and we were off. Unfortunately, we couldn’t go the last kilometre because there were police around and I didn’t have a helmet. So, he dropped me off at a tuk-tuk and we negotiated a fare to the bank and to bring me back to Tissa.

Meanwhile, back at the guesthouse, the former PM’s wife paid a visit with an extensive entourage in tow. No pleasantries were spared and we were quickly informed as to her position, presumably, so we wouldn’t make fools of ourselves and embarrass the staff. We performed excellently throughout, graciously greeting her in Sinhalese and bowing slightly in respect. We were rewarded with a beaming smile and the nod of approval from several of her staff! 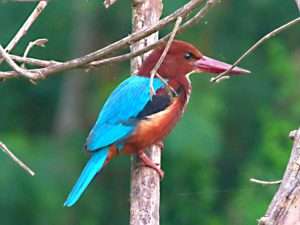 Later that night we met two young Dutch girls who agreed to share the van to Ella with us in the morning. This halved the cost and made it feasible for us. Otherwise, we would need to negotiate a number of buses from the side of the road and change a couple of times to get there. Because we would have to hail the bus from a junction a few kms out of town, it would mean we would most likely have to stand up till Wellawaya, about 60kms away. The van would make life a little easier for a change. 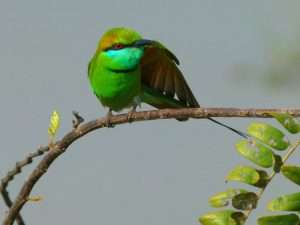 If you stay in Tissamaharama, we absolutely recommend the River Face Inn. Friendly staff, great food, lots of good information and a good base for a number of local options to undertake whilst there.

Take the free driving tour around the lakes in the afternoon. Lots of birds and even crocodiles!