Ella – From the coast to the clouds. 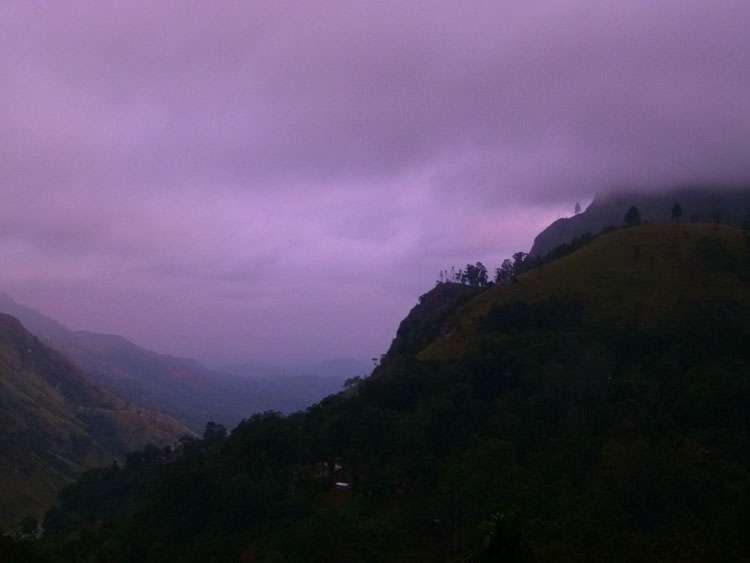 Ella Gorge in the clouds. Picture from our balcony.

After breakfast, with the Dutch girls in tow, we all loaded into a new Toyota van and were on our way out of Tissamaharama. It’s about a 90km trip via Wellawaya where the A2 terminates. About 5 or 6 kms before Wellawaya you can see the mountains rising up through the breaks in the overhanging palm trees that shade a lot of the road.

From Wellawaya the last 37kms to Ella is all up. It climbs steadily at first, then the road begins to zigzag as the mountainside becomes steeper. Cars and buses scream past as if on the flat, definitely not good conditions for cycling! 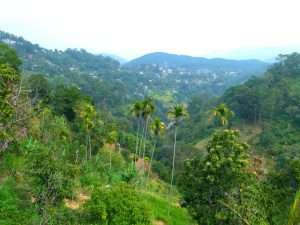 Ella town is quite small compared to many we’ve seen so far. The main street wouldn’t be any longer than a kilometre. We drove past lots of shops and restaurants on the main strip, all catering for tourists. The climb up to our guesthouses was pretty dramatic and we left Ella well down below us as we navigated across the steep hillside. The girls were staying just up the hill from us, so we dropped them off first, before heading to our accommodation that we had found on Airbnb.

After some confusion (as usual), we eventually found our digs. The only problem was the very steep climb up the uneven steps to it. By the time we ascended to the main landing we were both blowing hard and the lady and her daughter were laughing at us! Dilani took us to our room, up another flight of steps to the floor above. We were certainly glad to eventually arrive and we quickly threw our bags inside. 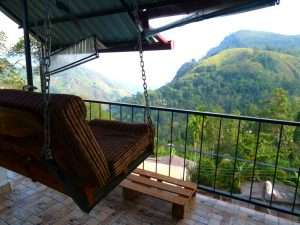 Namal’s Great View guesthouse did indeed have a great view, courtesy of being perched precariously on the steep slopes above the town. But even though we stood there breathless, the view back through Ella Gorge was worth it!

We settled in and wisely decided not to go back into town to look around today. We’d leave that till tomorrow when those steps would hopefully become a vague memory. We sat out on our personal balcony and just soaked up the view (and a few beers as well later on). At dinner, we met Kim from Holland and Thierry and Oona from Ireland and had a great time chatting.

In the morning, we all took breakfast on the top floor again, besides, it’s too far to go down to do anything else! Breakfast was good though, and cheap. Dilani is a good cook. 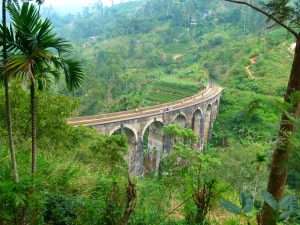 Our big adventure today would be to walk the train tracks below us into town, past the train station and on to the Nine Arches Bridge about an hour out of town. Then we’d take a shortcut Dilani had told us about and hike up to Little Adam’s Peak, a viewpoint that looks back at Ella and Ella Rock, a solid granite massive opposite us that formed the other half of Ella Gorge.

The walk along the train tracks to Nine Arches Bridge seemed longer than I thought, but we plugged away, on and on. It was good exercise, and we needed it. Anyway, that’s what we told ourselves! As we were nearing the bridge we could hear the train coming. That got us excited as we would love to have a pic with the train actually on the bridge. So, we ramped up the pace and eventually got to a bend where we could see a tunnel in front of us. Once again the train whistle signalled the train was even closer. At the entrance to the tunnel, I could see the bridge. 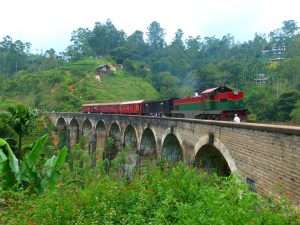 Worth the effort. Train on the bridge!

The tunnel was about 80m long and I was debating the foolhardiness of making a run for it and beating the train (which I still couldn’t see, but could hear quite plainly now). A guy on the other side was waving at me. He was hailing me to come through quickly. I looked at it one more time and wondered if I should put my life in the hands of this complete stranger. There was no room in the tunnel for the train AND myself.

The picture of the train on the bridge was too tempting, so I grabbed tightly onto my backpack with my camera inside and bolted like my life depended on it – well, actually, it did!! Now, did I mention I haven’t run 80m in many a year. My back, knees and ankles are not used to it and, in fact, don’t like running at all. Inside the tunnel, the darkness was all consuming and I just had the distant light to guide me. My mad scramble nearly went horribly wrong a couple of times as my feet would slip on loose rocks beside the tracks. I could now actually hear my heart beating and my breath squeezing out of my lungs. I can remember thinking, ” what the hell are you doing Tim?” Just as the train screamed its whistle one more time, I broke out into the daylight and almost into the arms of the guy that had urged me to come through.

I managed to pull up in front of him, gasping for breath, meanwhile he just stood there grinning, then pointed at the bridge. The train was about to climb onto it. I rushed over to the end of the bridge, there were about 50 tourists there, all vying for a good spot to photograph the train, some on the bridge itself. Fidgeting madly, I got my camera out just as the train sprung out of the jungle and onto the bridge. I took 2 quick shots before it shot passed us and into the tunnel where Shazz was waiting on the other side. I checked my camera – YES! Thankfully after all that, I had a decent shot! Now all I needed was a stiff drink! 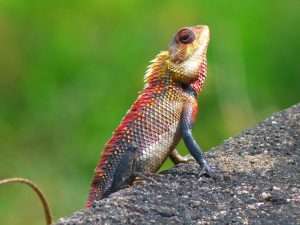 Some wildlife on the way to the bridge.

Shazz joined me on the bridge side of the tunnel and we got some pics before sitting down at a small stall where an old lady was selling coconuts to drink. Just behind her stand was a concrete stairway that leads up and over the hill and out onto Passara Road where you can find the beginning of the walk up to Little Adam’s Peak.

The road leads up through a tea plantation and is quite pretty. It’s actually paved for a lot of the way – very civilized! After you leave the tea plantation behind, you have to start climbing quite steeply up a track that has steps carved into it. It’s not too difficult and this section takes about 15-20 minutes. There’s a bit of a scramble up to the top, but nothing too challenging, ladies carrying babies were up there! 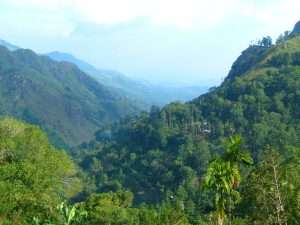 Ella Rock on the right. Little Adam’s Peak on the left.

The view is pretty special though, it looks directly at Ella Rock and back over the town itself. Certainly worth the effort. It’s hard to believe that this small island has this kind of mountain range at its heart, especially as we were at the beach just 2 days ago. We had passed into a new landscape and a new climate, it was cold up here and we’d need to dig out what little warm clothes we had otherwise we’d freeze.

On our way back down, we met a Canadian couple, Philip and Janis, who live on Vancouver Island in British Columbia. They were also well travelled and interested in our plans to cycle across the US later in the year. They graciously extended an invitation to come and see them back home in Canada when we got there. We swapped contacts and that was it! It’s so easy to meet people on the road, and as we are fully aware – one thing leads to another. Hopefully, we’ll meet up again after our cycling trip.

We bought some Arrack (local rice wine) on the way back to the guesthouse. We needed something to warm us up as a cold wind blew up in the evening. 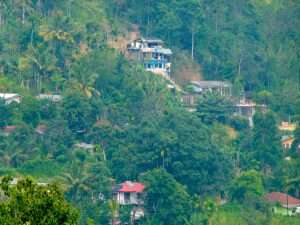 Looking back to our guesthouse, top and centre.

The next day we felt surprisingly OK, so we elected to take another walk. This time to the waterfall on the way to Ella Rock. We figured the Rock walk was a little out of our league just yet after talking to a few others who had done it. Once again, we had to walk the train tracks to get there on the other side of the valley to us. We could actually see it from our balcony at the guesthouse. It took us about 30mins to get there and we got some nice pictures of the valley from the train bridge adjacent to the falls.

At the turnoff for the falls a few locals hang out and begin to “guide” you to the correct path up to Ella Rock. As we informed them we weren’t going up there, they soon lost interest in us. The Dutch girls came out of the scrub just as we were leaving. They’d been up and down already and had a guide show them the way, even though they only needed some directions. As it turns out, they had gone up the difficult way and there’s an easier way further down the tracks just past the next station platform. They’re both young and fit and it didn’t seem to do them any harm. They were still walking up and down the main street a couple of hours later as we had another late lunch in town. I wondered if I ever had that much energy! 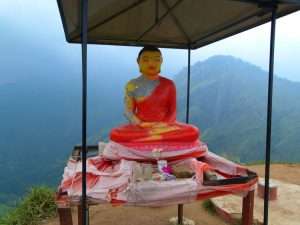 Our final day on the mountain was rainy and eventually the whole place whited-out. There was nothing much to do other than a bit of work and catch up on our diary.

We did manage to get into town for lunch again, but by the time we got back, you could hardly see your hand in front of your face.

You can walk to Nine Arches Bridge and then take a shortcut to Little Adam’s Peak. Just ask the local coconut lady at the bridge to show you the stairs, then ask locals to show you the correct path, there’s usually plenty around, and most speak good enough English to show you.

Ella Rock is a tough 3-4hr return trip. Follow the train tracks over the bridge, past the waterfall (ignore all signs), and then turn left immediately after the next small station. Check with your host too.

If you accept one of the “Guides”, you should negotiate a price FIRST!

If you want to stay somewhere with a view of the gorge, pick a guesthouse to the west of the town, as they all have views directly through the gorge.