Tangalle: If We Had Our Time Again … 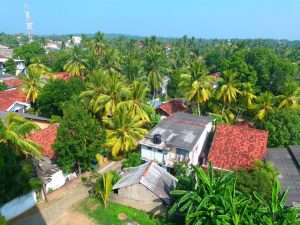 View over Tangalle town from the Mars Hotel.

On our way out of Mirissa, we hailed down a bus heading for Matara and changed over at the main bus station there. Starting at the bus station usually means you can get a seat in the crowded (but dirt cheap), Sri Lankan, public buses.

About 2 hours later, having stuck to the coast road (A2) all the way, the driver let us off in the centre of Tangalle (pronounced “Tangawl”). Our hotel, the Mars Hotel, was conveniently located about 150m down Sea Avenue, adjacent to where we got off. When we checked in, we doubled the population of the hotel. There were now two staff and us! The two guys were great and made us a complimentary papaya juice and hovered around being generally helpful. The room was clean and white and basic, but the AC worked well, and we had lots of space to spread out. 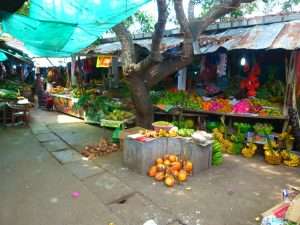 The reception come restaurant on the 4th floor overlooked the beaches as they arced around out of sight. It would make a great area to work (or follow the cricket).

Just down the road in the main street, opposite the central market and bus station was a small Curry and Rice place. Shazz ordered some roti and curry for lunch and brought them back to the hotel so we could enjoy the view, and she could catch up on some work.

At about 5 pm, we wandered up the small streets behind the beach to find a place for a beer and watch the sunset. The beach here was pretty untidy and scattered with litter and plastic waste. Inevitably a mangy dog would take up residence at your feet waiting for any stray scraps that found their way onto the sand. Completely oblivious, they would scratch themselves wildly, spreading all sorts of mange and ticks all over you! 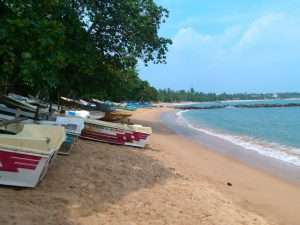 Tangalle beach, not really for the swimmers!

We had a couple of over-priced beers and picked up some more takeaway on the way back to the hotel. Much to our surprise and delight, the hotel also stocked some beers, so we had another with dinner and called it a night.

Shazz used the next day to work and keep abreast of recent jobs that had come in. I kept an eye on the cricket until about lunchtime, then set off on a walk around town. Firstly, I visited the small port area and checked out their fishing fleet of small, colourful fibreglass boats. Just along from there is a small beach that the locals seem to use. It’s probably a bit safer to swim here than where the tourists hang out, and it also has a lifesaver station and an area to swim between the flags. 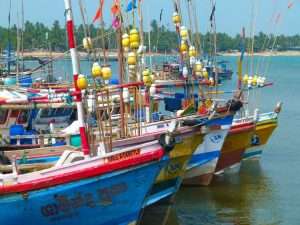 Up and around the headland I came upon a cricket game at the local ground. The men were using a tennis ball as no-one had any padding to protect themselves. Almost everyone, except the umpires, wore flip-flops! Amplifiers rang out as the game was being commentated from a small covered stand at the far end of the ground. It was all pretty serious stuff.

My final stop was the local market. It’s a small covered affair with fruit and veggies at the front and the wet market out the back in the lane. If you’ve seen one in Asia, you’ve pretty much seen them all!

We headed up the beach again for sundowners and found a cheaper place this time. We decided that dinner would be takeaway again. Shazz would get the food, and I’d go to the local Wine Shop for some beers (they’re much cheaper there than the hotel). That plan proved fruitless as the Wine Shop was about ten people deep at each counter and with the enthusiasm with which they were pushing each other out the way to get to the window, you’d swear they were giving it away free! I decided I wasn’t that keen for a beer and headed back. 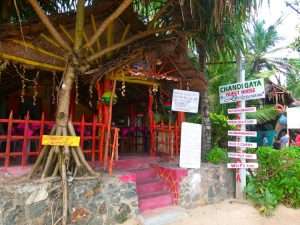 The next day we had a long breakfast and headed out about 11 am to find a scooter to hire. Unfortunately, there were none to be found. So, we decided to keep walking along the beach road to see what we could find. To our surprise, the beach further up was much cleaner and the hotels and guesthouses much nicer. There’s a lot of bungalow style accommodation that suits the beach setting, and most places had a place to eat and drink on the beach. There were even Happy Hours!

We kept walking though and only stopped for a bottle of water off a local bloke on the side of the road. It turns out he has Aussie friends, so we stayed and talked for a while. They had purchased the block to build a guesthouse, but they had a change of heart and gave it to him instead.

In front of us lay a murky creek with a pontoon to pull yourself across. We figured we’d get across and then the locals would charge us for the use of it. Call us cynical, but we headed back to our new friend’s place, and he showed us a path onto the beach so we could bypass the creek. 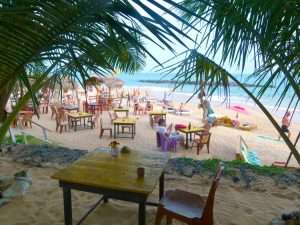 Along the way, we saw plenty of nature, including monkeys, huge lizards, colourful birds and even a mongoose! At the end of the road, we found the Ganesh Resort, a nice looking, slightly expensive place where we had lunch. It was a really nice, out of the way place to relax with great food and stylish looking bungalows.

So, with a stomach full of food, we made our way slowly back down the beach towards town, stopping at a chilled beachside bar for an early sundowner while the stereo played chillout music. Needless to say, it was hard to get motivated to leave.

The Wine Shop wasn’t as busy this time, so I lined up and was soon served a few cold beers. Once again, we took some takeaway back to the room for dinner. I must say, Tangalle probably won’t be remembered for its eating options.

Let’s hope our next stop, Tissamaharama, where we hope to go leopard spotting (no pun intended),  is not so culinary challenged. 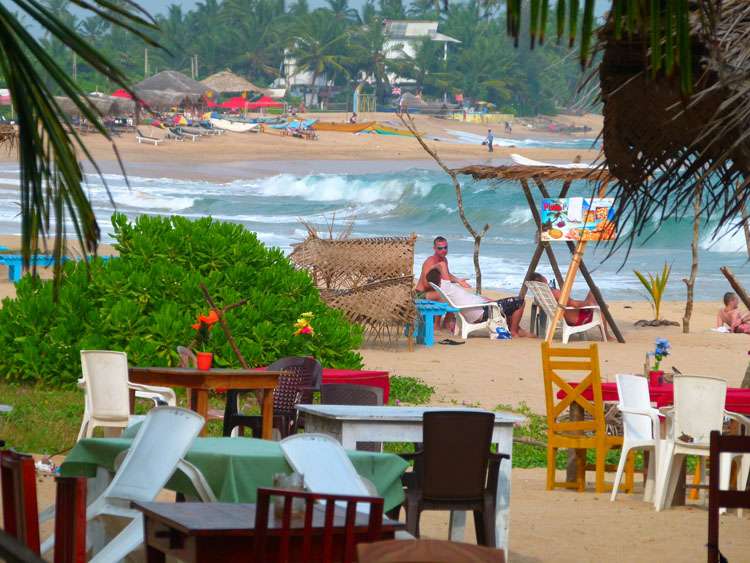 A better beach experience just outside of town.

Don’t bother staying in town. If you want the chilled out beach experience, head out east of town about a km to the nicer beaches and guesthouses. There are better eating options there as well.

Beaches up this way are known for their rips, so swim between the flags for your own safety. 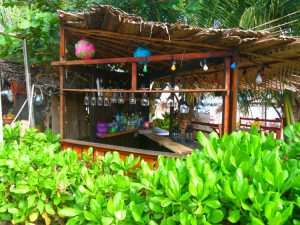 A short walk out of town, and bingo!

If you want a scooter, book it the previous day to ensure you get one. They go fast in the mornings. Also, make sure you have your International Driver’s License endorsed in Colombo at the Automobile Association. If you have an accident, your insurance company won’t want to know you!

We insure with and recommend World Nomads.

When riding on the bus your luggage can become a real pain in the ass! So, put it in the appropriate place beside the driver so that others can have a seat next to you. Just keep your eyes on it while people are getting on and off. It should be pretty safe though.

If you’re near the southern beaches, so are the mozzies! Take repellent as they can be a real nuisance and dengue fever has been prevalent in Sri Lanka in recent years.