Our first 100km plus day – Cycling Across Australia 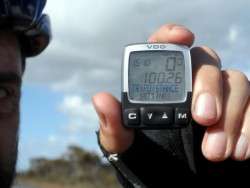 After an extra weather enforced day in Albany we were itching to move on.At 6.30 the sun was out. At 7am it was raining again and when we pulled out at 8am it hadn’t really decided what it was going to do. An hour into the ride we were hailed on. Then the sun came out and dried us off. The hills out of town were already testing the legs and we were wondering what the hell the rest of the day would bring. We basically zig-zagged out of town until we hit Lower King Road and followed this until we hit Mead road. Turning left we followed this until we met up with the South Coast Highway at about 21km. At this point we got rained on again but we had a pretty strong Westerly and now we were on the highway it would be pushing us along quite briskly. 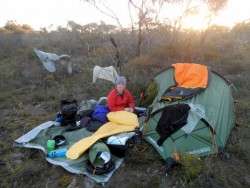 Getting everything ready for the night

The ride up until we hit the left turn to turn north was pretty problem free. We made excellent time and were in Wellstead (102km) by about 3.30pm. We made the decision to have an early dinner so we didn’t have to cook before heading the extra 13km to the parking area for the night. The guy at the Roadhouse let us fill all our bottles from his rain water tank out the back which was very much appreciated.

We headed downhill for around 13km and pulled into the first parking bay we came to. It was a bit of a disappointment compared to the one we’d stayed in between Margaret River and Pemberton. There was no table, no loos and the area out the back was pretty rugged. Tim found a track leading up the back and a bit of a flat spot to put the tent. We pitched up, laid the bikes out the back in the bushes, covered them with a tarp and set up the tent for sleeping. We were both pretty buggered. It was our first 100 km plus day and whilst the winds had been friendly our legs and bums were still feeling the effort. I was pretty damn thankful we’d eaten at the roadhouse. 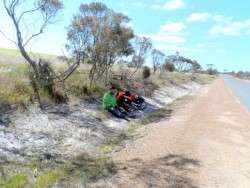 Resting in the shade

We packed up early and got back on the road. About 2km down the hill we passed a lovely parking bay, filled with caravans and motor homes on the river. Obviously we had pulled up too early and were meant to camp down here. Oh well. We would try not to make that mistake again. Having had a lovely 3 or 4km ride down the hill that obviously meant we had to go back up again. Cold, tired legs protested as we ground our way up the other side. As we hit the top the stiff WNW wind hit us square on the side of our faces as we stared ahead to another big down and up. And that was to be the story of the day. Down and up and down and up. The stiff cross wind had us cautious on the descents which meant less momentum to get us up the other side. We had one of the strongest winds in a few days but unfortunately, it was coming from the west and we were headed mainly north. Whilst not directly in our face it certainly felt like it was at times. 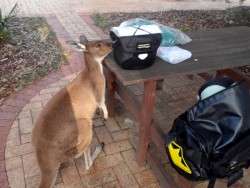 We had intended to drop in at Jerramungup for a late lunch, fill up our water and shop for anything we needed and then continue an extra 33 or so kms to another parking bay. But…by 3pm,and at the 70km mark we were tired and busted and made an instantaneous decision to pull up stumps at the Jerramungup Caravan Park. A hot shower and a trip to IGA to buy some proper food and a couple of beers had us feeling almost human by dinner time. The camp kitchen had a lovely log fire which one of the other guests had roaring and we sat around having a chat with Artie and Ivy, Jim and Yvonne. As luck would have it, Jim and Yvonne were headed to Esperance the next day and we devised a plan to have them do a water drop for us. That would mean we could cut back on what we needed to carry on the bikes and at least try and save our legs a little bit. We were heading west again the next day and we hoped like hell that we got the same winds as we’d gotten today.