Crawling in at Sunset… – Cycling Across Australia 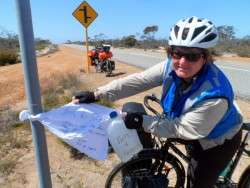 Picking up our water drop

After spending a nice evening with new friends in Jerramungup, we hoped we were ready for the next leg of the journey to Ravensbourne. We obviously weren’t having much luck with the weather at the moment. We awoke to sunshine but the slight breeze that was present appeared to be coming from the East. If there was anything we’d learnt on this trip so far was that the winds tended to get stronger as the day wore on. We weren’t looking forward to that. We had around 115km to do and the profile on the GPS was looking pretty damn hilly. 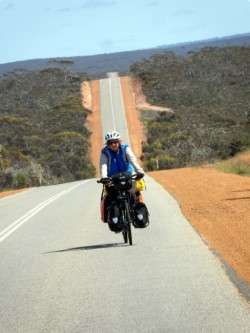 The long hilly road to Ravensbourne

To cut a long story short. It was sunny, the wind was an easterly and some of the hills were ball busters. Thank god we had the water drop or we simply would not have made it the whole way. At 1pm we still had 55km to go and we needed to take a break around every 5 or so. There was very little shoulder on the road and the traffic was constant. We like to get off the road where possible if two caravans need to cross or we get a big truck behind us. Unfortunately in places, the steep drop off from the bitumen makes getting off the road a hazard in itself.

I started to make a plan. If we could be at 75km at 2pm, 90km at 3pm we should be able to make 105 at 4pm, be in before 5…We were reckoning that sunset was about 6. We’d never left things this late and the adrenalin was pumping. The first goal was reached. 77 by 2pm. Then the hills kicked in again. Rollies were were cruising over two days before became an effort as the wind kicked in more strongly. At 3pm we were only at 83. By 4pm and pretty busted still hadn’t cracked 100. At 5pm we had 8 to go and we limped into town at 5.45m. The last 3km had been extra challenging as the local magpies took a dislike to us and started to dive bomb. I was really too stuffed to worry too much and screamed “Come on you F$%kers!!” They must have seen the murderous look in my wild eyes and while they still continued to swoop they did appear to stay out of arms reach. 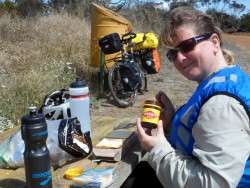 We finally made it to the top of the hill in the middle of Ravensthorpe. My computer read 120km with an average of 15.34 kmph. That doesn’t tell the tale of how many breaks we needed to have because our legs wouldn’t keep going. The pub sits on top and the campground was way down the other side. If they had no room we would be forced to come all the way back up to get a room. Better to check the price here and now. At $96 for a double we shook our heads and headed on down. The campground is under new management. It’s definitely not the best one we’ve stayed in but the facilities are OK and we were too stuffed to care. We pitched the tent, changed our clothes and headed to the servo to get some fish and chips. Tim even had the strength to re-ascend the hill and get a couple of beers from the local Celebrations. It was cold, the frogs in the dam were deafening and the mosquitoes were ravenous. I simply ate dinner (extortionate and not that great), added another layer of clothing, put the earplugs in and crawled into my sleeping bag. We’d made the decision to take the next day off. Predictions were for 30 degrees and we were too busted to attempt another 80kms in that kind of temperature. A day off would do us good to regroup for the final push onto Esperance.

The next day we cleaned everything. Clothes, us, and panniers. We shopped at the local IGA and ate some really good nutritious food. We rested our legs, bathed in the warm weather and generally recuperated. We’d learnt another lesson. Listen to your body and look after yourselves. We didn’t have any time constraints and we had nothing to prove to anyone but ourselves. 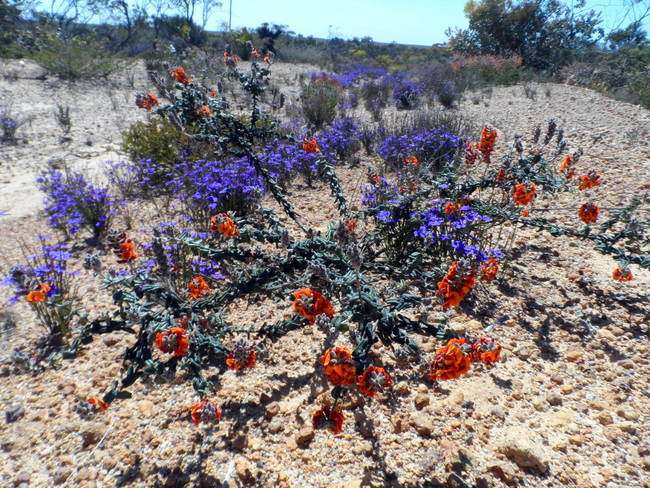