Kamikaze Magpies and Tailwinds Down – Cycling Across Australia 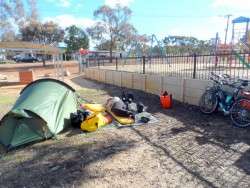 Our day off in Ravensbourne had done a lot to ease our weary bodies and aching bums but little to dampen the trepidation we felt about more hills and Easterly winds. We spent the day tinkering with our bikes and checking and rechecking the weather conditions and road profile for the next day’s ride to Munglinup, 80 kms away.

We awoke before the alarm and nervously packed the panniers and loaded up the bikes. We’d counted maybe 50 or 60 long triple trailer trucks headed down that road yesterday and we’d agreed we’d just get off the road each time one approached.

All our neighbours in the park had been quite friendly and interested in what we were doing and had come up and introduced themselves to us. Of course curiousity plays a big part in it but the Grey Nomads love a good travel story as much as anyone – and we’ve got a few!! They were all on board early that morning to wish us well -the standard “safe trip” that all good travellers wish each other.

True to form the wind was predominantly westerly – the weather bureau had been spot on again. This combined with the fact that the hills had diminished somewhat made the going so much easier. We had also managed to cull 3.5kgs of clothes in Ravensthorpe (sent to Mark in Adelaide for later use), so our frame of mind soon changed to a more positive one. “Yes we can!!” We were also cycling a bit wiser now – we are learning as we go (Our friends Sergei and Adrienne promised we would). We are learning to be much more patient now and just “spin” up the hills instead of an all out attack strategy. This saves our legs a lot especially in the latter stages of the rides. We also know that we have until about 6pm to get somewhere now without lights on the bikes, so 100kms is much more achievable with some more hours in the saddle.

To our surprise we arrived in Munglinup about 2pm. This left us with oodles of time to pick ut a tent spot opposite the roadhouse and even have a hot lunch! All that was left to do was wait till dark so we could go to sleep. We had arranged with the owner of the roadhouse to drop off some water for us (3 L) at Dalyup Hall, about 35 kms out of Esperance. This, she was happy to do and we are grateful for her generosity – we really knew we were in the bush now! True to form also was the Grey Nomads who came over and gave us apples and bananas (something healthy for a change.) 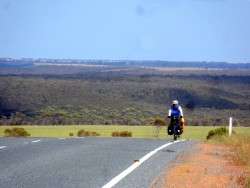 Out on the open road

We timed our departure the next morning with the opening of the roadhouse at 7am. this meant we could have coffee and pies (the breakfast of champions) and also that we didn’t have to use the gas.

Much to our surprise yesterday, the trucks we’d seen the previous day never made an appearance (except for a handful). Today they increased their numbers a bit but were still nowhere near what we had seen in Ravensthorpe. The traffic, in general, increased though – especially caravans. We have learnt that caravans are our greatest danger, being wider than the car pulling them leaves a lot of room for error for a dozy driver. We have been getting off the road for these guys too, especially with oncoming traffic and no shoulder on the road. Getting off the road is greatly appreciated by everyone, the truckies always give us a big wave and blow their air horns in appreciation. When you’re carrying 3 trailers and doing 110kmph, the less obstacles the better!! They’d take a good kilometer to pull them up to a dead stop, so you’d be road kill for sure. Ending up as a hood ornament on a 60 wheeler isn’t part of our plans! So..we spent a bit of time on the side of the road on the busier sections, but that just gives us a chance to rest our legs and release the stinging sensation of our bums.

Today’s run was the flattest since the first week. We managed 3 quite long, steep hills where rivers crossed the road, but none of them forced us out of the saddle. The tail wind helped a lot too especially across a 30km section of flat where we hooted along at about 30 kmph. 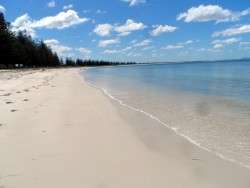 The beach at Esperance

We were really impressed by our bikes too. Sakura and Radmila are proving to us everyday that this exactly what they are built for. We are growing to really love our girls and appreciate just how much more specialized they are than normal road bikes. They actually thrive under the load and handle way better than stripped down riding around town. 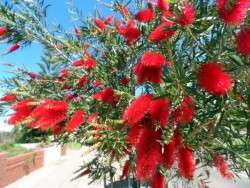 Just as Shazz and I were beginning to think things had gotten much easier for us (and they had) we were sent a little reminder that the life of a touring cyclist isn’t meant to be too easy – enter the Magpies. If there was ever a chance that we weren\’t sure it was nesting season, then we were sure now!! Every single Magpie from about halfway began an all out assault on the two of us. Their Kamikaze bombing runs must have been comical for any onlookers, but after about a dozen of these pesky birds swooping and screaming like banshees trying to knock us over we had to wonder when it was going to stop. Late October/November it turns out, so down the came in droves all the way to Esperance.

True to her word, our spare water was waiting for us on the front steps of the deserted tennis club hall at Dalyup.With only 35 kms remaining, Shazz and I had broken the back of today\’s ride,so we took our time and made lunch on the front verandah and enjoyed the fact that we would be riding downhill into Esperance and be there with plenty of time to find accommodation.

We arrived at the city limits at 2.30 pm but it wasn\’t until 3.30 pm before we had found a site to sleep for a few nights. A head wind caught us out as we bypassed the highway to go down Pink Lake Road. This sent swarms of midgies splattering into our faces and made riding very difficult. Our first choice in caravan parks no longer existed and when we got to the tourist information centre it was closed!! At 3pm!!! We found the telephone number for the nearest Caravan park (Seafront at Castletown) and confirmed that they had a site for us. It was about a km up the beach so no big deal.

Our first job was to set up the tent, unload the bikes and…find the pub!! As it happened the Traveller’s Inn is about 400m up the road and has Pale Ale on tap. A couple of $12 T-bone steaks sent us reeling and we were soon on our way back to the tent for an early night. Amen. We need a couple of days rest before riding north to the start of the Nullarbor.

Beach and sunshine in Esperance