Cycling north to the start of the Nullarbor 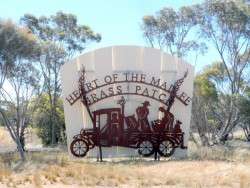 After a couple of days off the bikes after our trip down from Ravensbourne, the legs were certainly a lot fresher but unfortunately I had managed to catch a chesty cold. That meant I was breathing heavily through my mouth as we climbed the first hill out of Esperance and in no time at all was choking on my first fly of the day. Yuck! We had found a Buff at one of the parking bays on the way in. It had obviously been lost by another cyclist and we’d picked it up just in case we ran into them along the way. I fished it out and pulled it up around my nose and mouth, thus starting the bank robber look you will see in many of our photos from now on. No more eating flies although they would still prove to be one of the most unpleasant factors in our journey.

The weather was pretty nice on the first leg to Salmon Gums. Slight side winds and clear sunny skies made for a pleasant ride even though it is ever so slightly uphill all the way for 106km. The rest stops were evenly spaced and well stocked. We had a coffee at Gibson, lunch at Scadden and drinks and a most welcome surprise in the form of icy, cold fruit salad at Grass Patch. Later in the afternoon it got pretty hot but we had plenty of water and rested quite a bit so we were doing just fine. 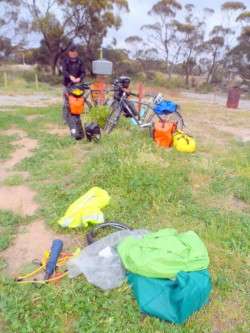 Setting up at Salmon Gums

The next day we were up and off reasonably early. It was a lot cooler, with quite a bit of cloud around and good tailwinds. The first 20km was a blast. Unfortunately, it wasn’t long after that that the first downpour caught up with us and then proceeded to dump on us for the next 80kms to Norseman. We were absolutely soaked and freezing cold. Our hands were going numb as were our feet. The traffic seemed to think that rain required them to go faster and we spent quite a bit of time on the side of the road letting long lines of cars, caravans and trucks go past us.

By the time we got to Norseman, early afternoon we were absolutely chilled to the bone. We had all good intentions of putting up the tent ($20 for an unpowered site) once the rain lightened up but we absolutely needed to get out of our wet clothes and into a hot shower before we caught pneumonia. We parked up the bikes in the BBQ area, got our shower stuff and went and thawed out. It was a full 5 minutes before I could actually feel my fingers and toes properly. We made some hot tea and a cup of soup in the camp kitchen and watched with dismay as the rain continued to pelt down and the barren tents sites got muddier. It didn’t take much of that to convince us to bite the bullet, pay the money and take one of the cabins. $92/night with no ensuite seemed a bit rich for us but there was a heater to dry out our shoes, a basic kitchen and a TV to keep us amused. 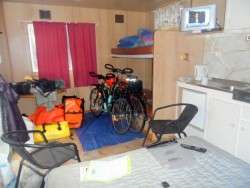 Helen and David, our friends from Brisbane arrived that day and stopped in at the caravan park as well. The atrocious weather had even stopped their 4WD camper from getting onto some of the surrounding roads. No wonder we’d had such a rough day.

The next day was a cracker. Sunshine and blue skies all round. We had a choice to move into the tent but we had so much to sort out with washing, cleaning the bikes and provisioning the Nullarbor leg of the journey that we decided to stay put. We did a big shop at the local IGA and parcelled it all up for Helen and David to drop at the roadhouses along the way. We fully intended to eat at the cafes where possible but had no idea how far we would be able to cycle each day and whether we would be able to buy supplies for the intended bush camps along the way. Better to be safe than sorry we figured.

Norseman itself is an interesting place. Not many people know that it is named after a racehorse, The iconic corrugated iron camels stand proudly in the centre of town with information plaques dotted around the intersection. The IGA is well stocked and the pharmacy extremely helpful. It’s definitely the place to stay for a day and make sure you have all your stuff sorted for the longcycle across the Nullarbor. 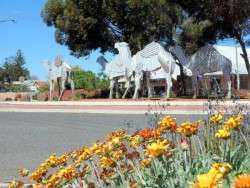 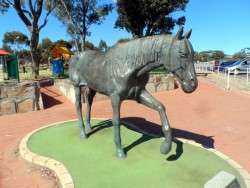 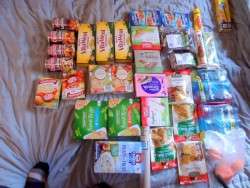 Supplies for the Nullarbor

Supplies for the Nullarbor 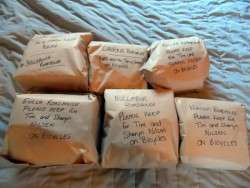 Our food parcels for the Nullarbor

Our food parcels for the Nullarbor