We Hit the Other Side (of the Country!) – Cycling from Lakes Entrance to Eden 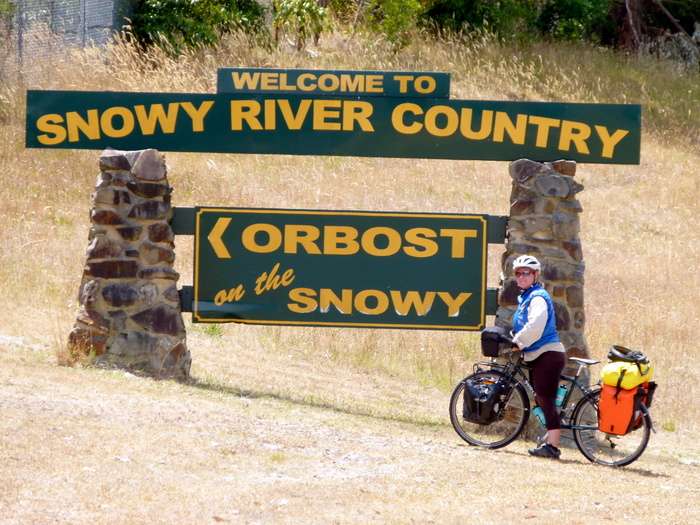 Where Australia’s snow ends up…

Well we literally did “chill” in Lakes Entrance. With the heat wave breaking several records all over Victoria we holed up in the unexpected air conditioning, venturing out, only in the cool of the evening to visit the various social hotspots around town… 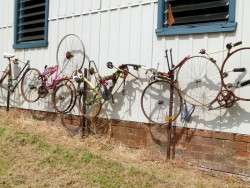 We had planned it well again. Our biggest worry was a bushfire near Cann River that had resulted in the highway being closed to ALL traffic. It would have been scary enough in a car but on slow moving bicycles, the thought of being trapped by fires was not a pleasant one. Thankfully, the cool change came through on schedule, the fire was contained, and we were off to Snowy River country with the assistance of a tail wind. It was “only” 57 km away but there were some challenging hills and the weather was still quite warm. By the time we arrived in town we were VERY pleased that there was plenty of shade at the Orbost Caravan Park. It’s a nice little campground with reasonable amenities except for the”Camp kitchen” which basically has a couple of chairs and tables, a kettle and BBQ’s and nothing else. It was also quite a bit cheaper than where we’d been too at $24 for an unpowered site (peak)

As it was Sunday afternoon, there wasn’t really that much happening downtown. We managed to grab the last couple of pies at the bakery and a cold beer at the pub before shopping for dinner and breakfast at the local grocery store and heading back to camp for an early night. We had well and truly entered hill country and we had a 75km ride to Cann River the next day.

It was a beautiful ride but I wouldn’t say it was our most pleasant. The road is very hilly and it was quite busy with holiday makers heading home. Quite a lot of them had big boats, caravans or trailers on behind and the shoulder on the road completely disappeared in sections. We got rained on a couple of times that made the down hills even more precarious Definitely not the safest I’ve felt on this trip. 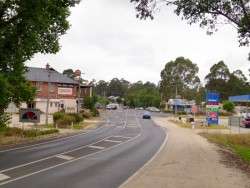 After 75km and the very real threat of heavy rain we crossed over the bridge into town to pay for the camping (Orbost side) at the local pub as instructed. As the weather deteriorated we decided to ask about rooms. We intended to rest for a day to let the weather clear so the decision to stay in the $60 room wasn’t taken lightly but as the drizzle got harder and continued into the next day we were glad we’d done it. The meals were pretty good at the pub as well and there was a sitting room upstairs where we could chill on our day off

Tim ran into another cyclist, Jaeson, while he was out having a look about town and guided him to the pub to pay his camping fees. He was so happy to meet other cyclists he came back to the pub that evening to have a couple of beers, dinner and a long chat about our respective journeys. As with us, this was his first cycling adventure and he was finding all about it as he went. 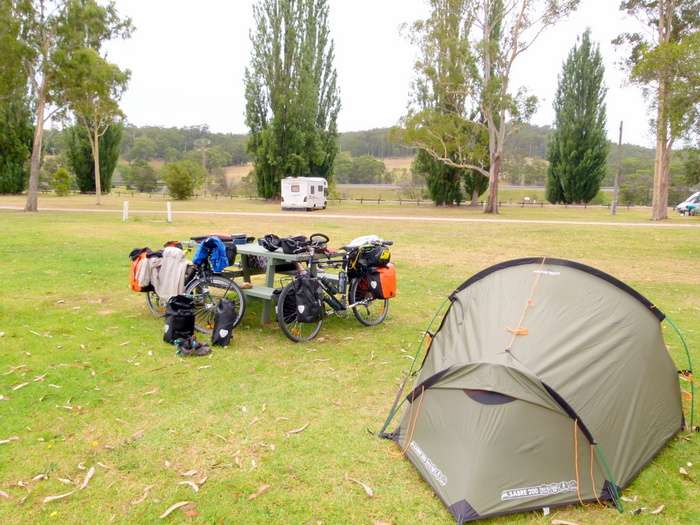 While it was only 47km to Genoa, we knew we were up for the biggest hill we’d come across since Lavers Hill on the Great Ocean Road. Mt Drummond didn’t disappoint but it also didn’t feel as hard as expected. I suspect it’s more difficult coming from the Eastern side, judging by our downhill run. 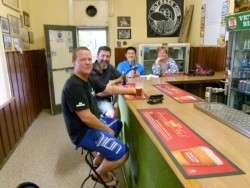 Friends at the Genoa Pub

The campsite at Genoa is community run and payment is by donation. There weren’t too many camped up when we got there so we picked a prime site near some tables and chairs. It’s a pretty basic campsite (cold showers, functional loos, a few tables and chairs and a couple of BBQ’s) but is in a pretty awesome location, grassed sites and plenty of shade. Next door was a bloke called Jamie who was walking from Ulladulla to Melbourne, pushing a cart. Like us he was just doing it because he wanted to. There were no charities involved or a cause. He simply wanted to challenge himself. It’s heartening to know we aren’t nearly the nuttiest people on the planet. Jaeson arrived a bit later on and pitched up next to us. He’d taken a wrong turn and ended up doing another 20 + kms to get there. Not happy Jan!! 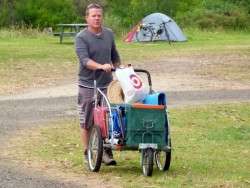 Jamie pushing his cart across Australia

With everything sorted in camp we headed over to the pub which reportedly did meals. Jaeson and Jamie decided that sounded like a good idea and came along too so it turned into a very pleasant evening.. I have to say…not only were the beers cold but the pub served up an amazing meal for a very reasonable price. I had a steak, salad and chips and it was enormous and cooked to perfection. The snitzels, mixed grill and seafood looked equally as good. What a find in the middle of nowhere. Highly recommended and much nicer than Continental Macaroni and tuna!!!

When we returned to camp we were amazed to see it was heaving with campers. They ranged from massive motor homes to people sleeping in cars and everything in between. I did note that none of them had made the trip across to support the local establishment so I hope at least a few of them made a donation. It’s a great facility and deserves the support of those that use it. 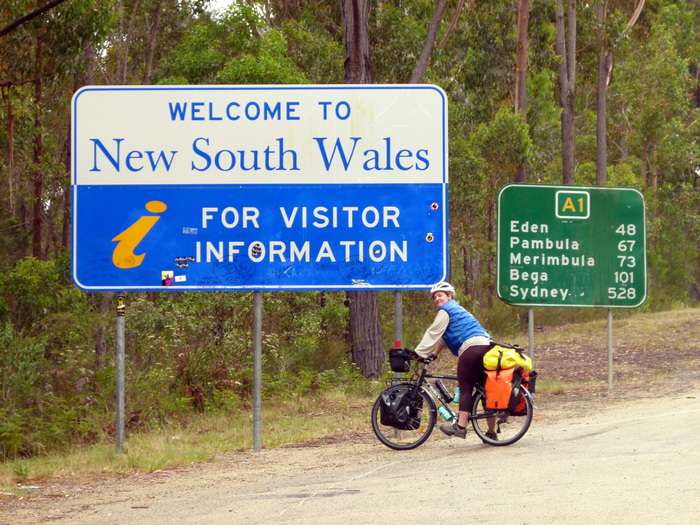 Crossing the border to NSW

Tim with JAeson and his Bike

The next day we made the final push to the East Coast. Out of the campground and straight up the first hill, our legs were screaming as they felt the after effects of the day before. After 14km we crossed into New South Wales at the top of another big hill. Not only had we entered another state but we’d been told that the shoulder would immediately improve…that definitely excited us. Unfortunately it was bollocks. The shoulder did improve BUT it was gravel and there was an inch drop off the bitumen to reach it in places.

After around 48km of fills in the forest we stopped at the roadhouse at Kiah to have second breakfast. The macaroni and tuna has done it’s job up til then but with another couple of big hills to go we needed more sustenance. Awesome luck..the roadhouse sold “the best bacon and egg roll on the coast” or so the sign said. After wolfing it down I’m not going to argue. It was pretty damn good. 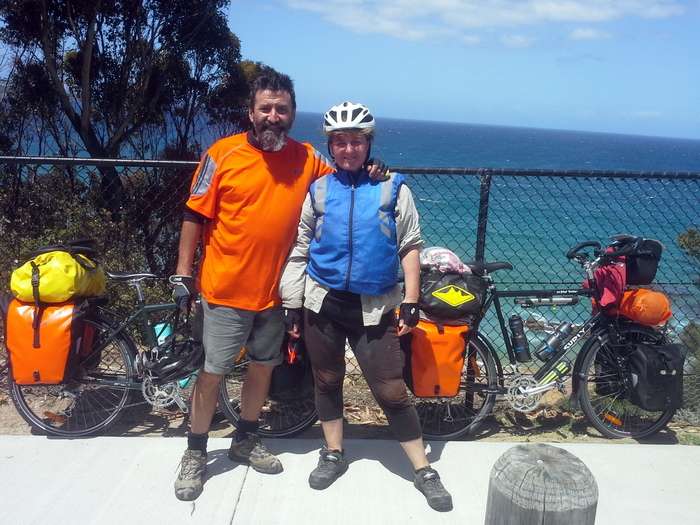 We road down to the creek and then back up, up, up….When we finally crested the final hill into Eden I must admit I had a tear in my eye. There before us was the Pacific Ocean…whilst the journey was nowhere near finished, we had crossed the continent…Around 5500km of peddling…When we set out we had no idea whether we’d make it even this far. In fact we didn’t know if we’d even make it out of Western Australia….About 1500km to go before we get to the end of this journey but one more goal has been achieved. 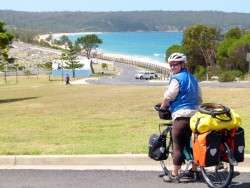 We rolled down the hill towards town and spotted several more decent hills to go in either direction. Fatigued legs required we confirm the location of the caravan park and that they had a spot for us before heading anywhere so we headed for “Information” right in the main street. That sorted we headed for the lookout, got a stray resident to take a celebratory photo and found an alternate (flat) route to get to The Garden of Eden. It’s a great park, just up from the beach, with lush green sites, awesome amenities including a pretty good camp kitchen. With Australia Day coming up we were keen to stay off the roads so we booked 3 nights. The legs will well and truly appreciate the rest before we hit the hills again. 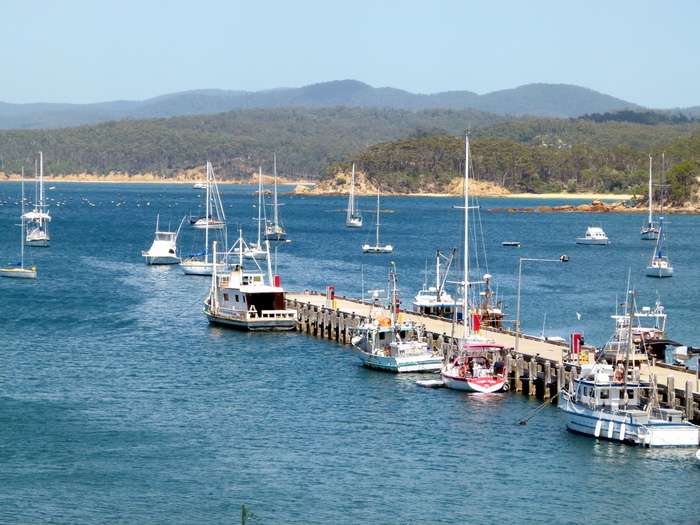 The Wharf at Eden, NSW