Hit hard by the Hills – Cycling from Eden to Batemans Bay 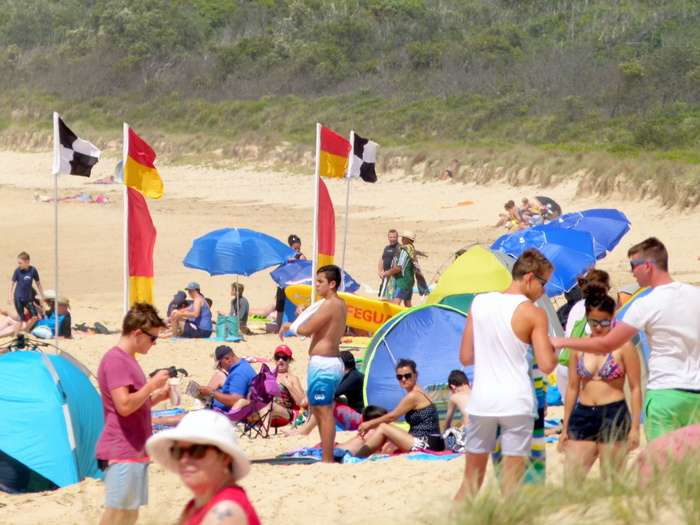 We thought once we’d made it through the South East of Victoria that we’d be hill fit and ready to roll. I had high hopes of making Sydney by the end of January, averaging just over 70km a day. Surely after almost 6000km we were bike fit….How naïve was I. The hills of the South Coast of NSW were ready to sort us out, bust the ego and have us sending kilograms of unwanted luggage straight up to Brisbane. 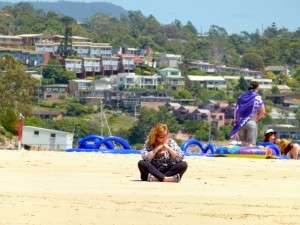 With Australia Day just round the corner, signaling the end of school holidays, we had a deep desire to stay off the roads and out of the way of the increased traffic on the road. We knew the route would e hilly and recent experience suggested the shoulder might be non-existent. Better to let everyone get home before we set out north. So, we had three nights in Eden, still getting plenty of exercise walking up and down the local hills and then went onto Merimbula for 3 to break up the downtime.

The ride up to Merimbulaalong the Sapphire Coast Road was a clear signal that I might have been too optimistic in my estimates of how far we’d get each day. While it’s only 24km, hills such as “Bellbird Hill” soon sorted us out and had me pushing Sakura up the steepest part of the incline. The weather had hotted up as well which definitely had an impact on endurance levels. As expected, the road was busy and the shoulder disappointing for quite a bit of the ride. A coffee stop at Pambula bought us welcome news. There was a bike path all the way into Merimbula which meant we could get out of the traffic and actually enjoy the views. It was also the flattest part of the ride which was a welcome relief for our jelly legs. 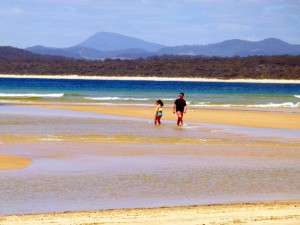 At Merimbula we stayed at the YHA, a really nice hostel with a very well equipped kitchen and recreation area. The weather on Australia Day was absolutely glorious. As I sat on the beach, surveying all the beachgoers and their red, white and blue beach accessories I reflected on what an amazing place Australia was. We are so blessed with natural beauty, a great lifestyle and relative freedom compared with many of the countries we’ve visited over our travels. Unfortunately many Australians take this for granted and don’t realize how lucky they are. Bogan behavior is well and truly entrenched in many of the areas we had visited recently. I’m sick to death of dodging broken bottles on the side of the road and the amount of littering is extremely disappointing. Don’t get me wrong, it is nowhere near as bad as many developing countries but there is absolutely no excuse at all in Australia where bins are everywhere and emptied at frequent intervals. What kind of mentality does it take to throw glass out of a speeding car…I just don’t get it. 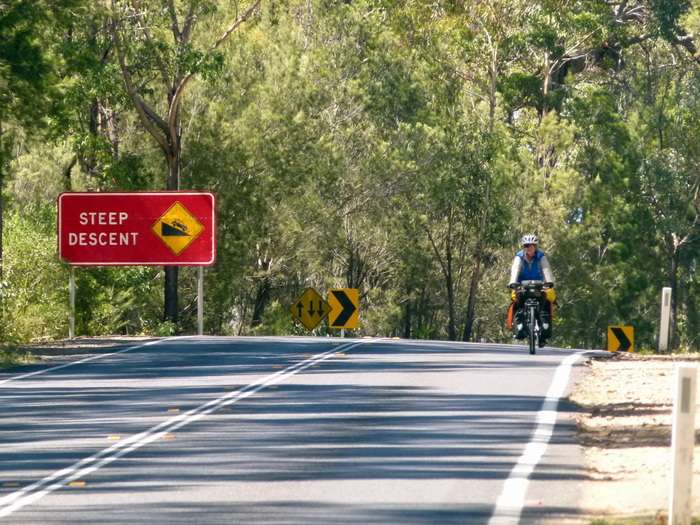 The next stage of our journey was a relatively short ride of 28km to Tathra. Once again the hills well and truly sorted us out with three very large ones before the infamous “Evans Hill”, which I actually don’t think is as bad as the previous three. The shoulder, once again was pretty much non existent for much of the ride as well.We averaged a measly 11.5kmph on this ride and were very happy to find a grass site at the Tathra Big 4 and collapse into an hours “powernap” before heading back into town to have a look around and grab something for dinner. It’s quite a rugged coastline and the wind had whipped up quite a surf….absoultely fabulous for the lone kite surfer having an absolute blast in the conditions. 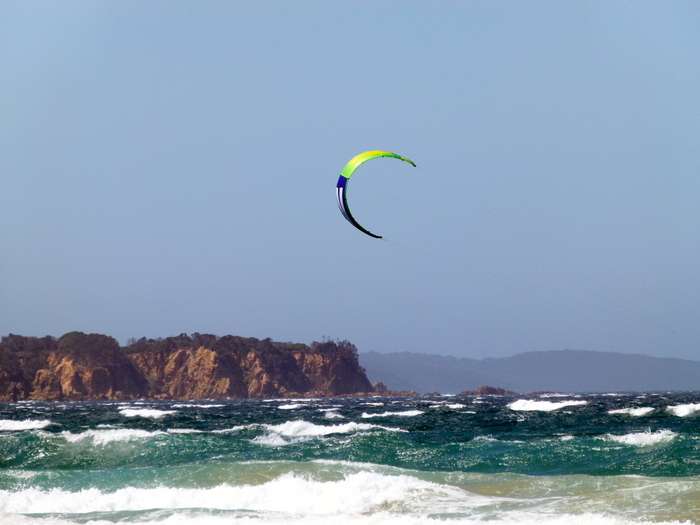 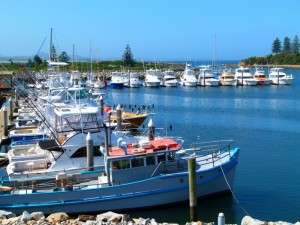 Bermagui was next on our list. The wind had finally turned in our favour which was a big help. The 43km was challenging and I had to walk Sakura a couple of times and it was pretty damn hot. Once again we were happy to pull into town for a cold drink and refuel. As the lactic burned in my legs I reflected once again on how naïve I’d been at my level of fitness. The Bermagui Caravan Park was OK but still working on peak rates which was a bit unfair now school holidays had finished. I had no desire to move very far at all and stopped in camp fixing the blog while Tim took in the sights, his favourite of which was the Tavern down at the very picturesque marina. Who’d have thought? 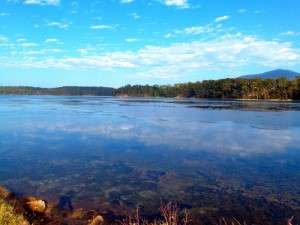 We had hoped we’d get all the way to Moruya the next day but a strong head wind (that got even stronger as the day progressed) had other ideas. The warm weather and plentiful hills (only 1 walker today) had us pulling up stumps in Narooma, a mere 35km down the road. At this rate it would be April by the time we got back to Brisbane! We pitched up at the Easts Caravan Park near the beach. Facilities are excellent, especially the kitchen and TV area.  Once we had a bit of a recovery nap we headed back into town to survey the “Million Dollar” view from the local pub. Not bad at all although the trees did block the vista somewhat. I did note that one of the trees looked to be on it’s last legs and wondered if it hadn’t been helped a little by human hands. 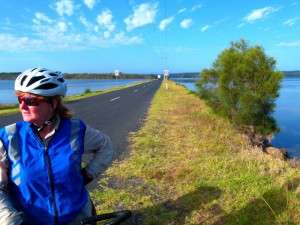 I was extremely glad we’d stopped in Narooma after completing the 47km trip the next day to Moruya. WE took the bike path out of town for the first 15kms. There were lots more hills but at least I didn’t have to walk any today. Maybe I am getting fitter? We stopped in for a cold drink at Bodalla and then hit a big hill straight up. An engineer had told us that the NSW government saved a fair bit of money by not grading the slopes, instead heading straight up hills. They must have saved a bloody fortune from Eden because they all seemed to be ridiculously steep! The Moruya Riverbreeze Caravan Park is a nice one and the stay would have been extremely pleasant were it not for some very noisy foreign tourists who felt it was perfectly OK to talk at the top of their voices til almost midnight. Unfortunately, inconsiderate campers was to become a bit of a them in this neck of the woods. 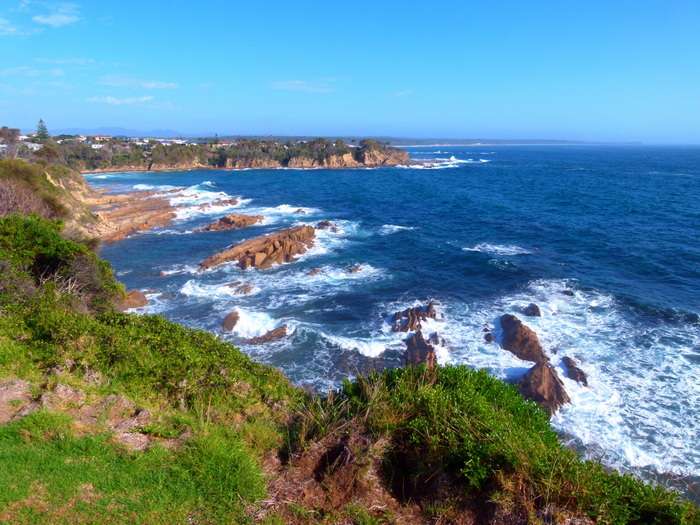 Views on the bike path from Narooma, NSW 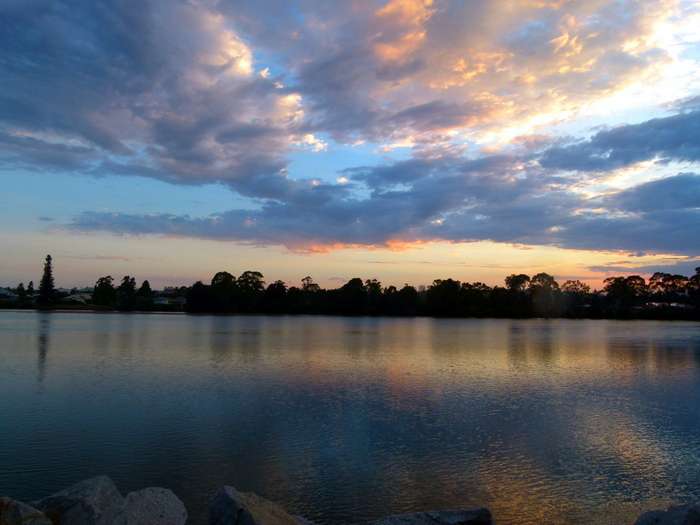 Sunset over the River at Moruya, NSW

The last stop before another rest day was Batemans Bay. We had been advised to take the coast road rather than the highway and the advice was excellent. The first 16km out of town is as flat as a tack. We searched our memories to remember when we’d had that long a stretch of straight, flat road and it had been way back in western Gippsland. We then hit hills for 20kms before popping out onto a bike path for the last 4km into town (Total 40km). There was a Big 4 Campgroundabout 3km before town but we were aiming for the one much closer to the centre. Unfortunately that one didn’t take tents at all and we found ourselves riding back over our tracks to pitch up. Gotta hate that! Anyway it was a great campground with excellent facilities and we met some really nice people during our stay. Big 4 seems to be the premium chain when it comes to amenities and usually doesn’t cost any more than the competition. The only downside was a large group of “Ramblers” who were quite loud late into the night and get up at sparrow fart and did the same. Fortunately that’s what ear plugs are for. 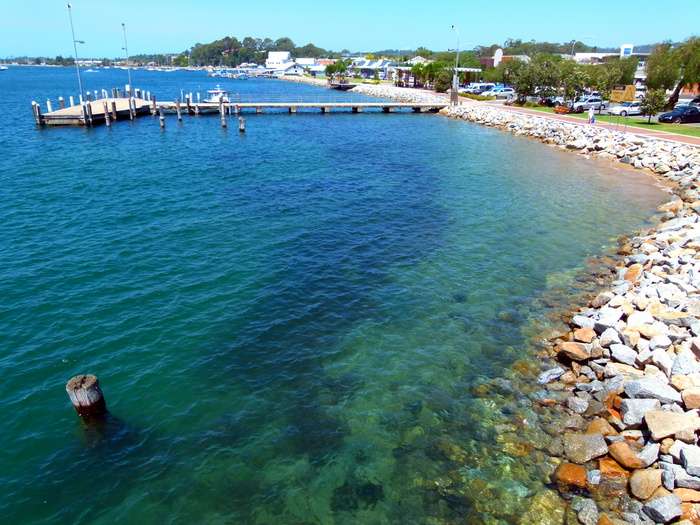 We looked at the weather for the next few days and saw that headwinds and increased temperatures were the order of the day. Pretty busted and losing a bit of motivation, we made the strategic decision to stay three nights and head out again with tailwinds and cooler temperatures. There was plenty to do including weekend markets, a lovely beach, catching up the blog, mailing off a heap of excess winter gear and giving the bikes a bit of care and attention. We figured the time out would serve us well, mend the psyche and set us up for the push into Sydney. We are finding out that cycle touring is every bit as much about mental energy as physical fitness. When the mind says stuff it, you ain’t going anywhere.