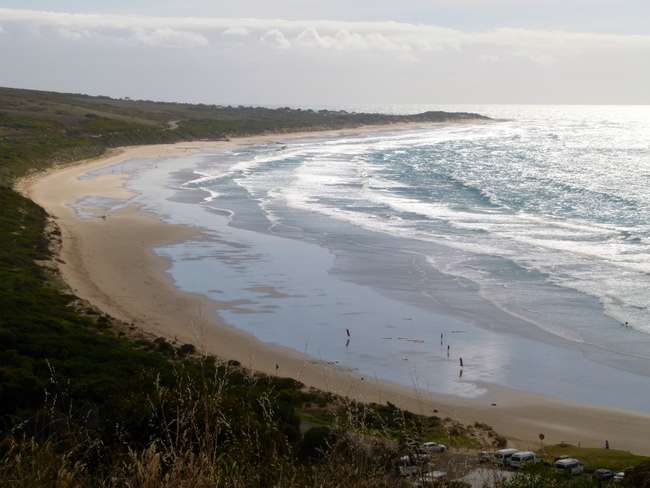 After our big climb up Lavers Hill, a rest day in Apollo Bay was exactly what we needed, (the copious beverages were probably not) so the 6am wake-up call wasn’t all that welcome, but we wanted to miss the bulk of the tourist traffic on our ride through to Lorne, 47km away. 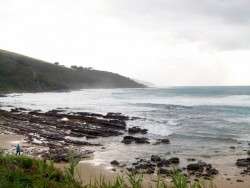 We weren’t sure what to expect of Lorne but we knew it was going to be ritzier than Apollo Bay. I’d rung the Great Ocean Road Backpackers, enquiring about a bed in a dorm. We were paying $30/night each at Apollo Bay so I was bowled over when she quoted me $50/night each. I spluttered and told the woman on the phone that it was way dearer than where we were staying. Her reply…” Comparing Apollo Bay to Lorne is like comparing Ballarat to Toorak!” For those that don’t know, Ballarat is a large country town in Victoria with loads to do and see and a huge amount of history and Toorak is a posh suburb in Melbourne. I was tempted to tell her I was from Ballarat but held my tongue and politely declined her offer. My next enquiry was to the camp ground who told us we could have a small powered site in the centre for $70!!! Or we could have an unpowered site up a hill for $65. Good grief. Thank goodness we only planned to be there one night. 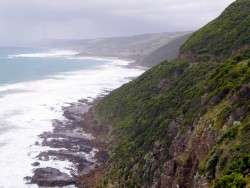 Road cut into the cliff – The Great Ocean Road

We headed back out the way we’d come in. The road was remarkably quiet this early in the morning. The skies were overcast which made it quite cool and the wind helping us along the winding road.

This leg of the Great Ocean Road is definitely one of the most scenic and the absence of much traffic and good road conditions gave us time to look around. Every now and then the sun would poke through the clouds and highlight the incredible colour of the water. We had to be pretty careful of wind gusts, knocking us off the road as we’d round a bend. The road is pretty good, although the shoulder is non-existent in many places. 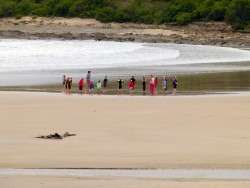 In no time at all we were scooting through Lorne itself. It’s quite a bit larger than Apollo Bay and whilst the cafes, pubs and restaurants are definitely more expensive I wouldn’t say the main drag is any more inviting to holiday makers. The beach looks fine but gray skies and cool temperatures didn’t tempt me to don the swimmers. It was definitely throbbing though as almost every table at every café was taken. Just walking down the main street was a bit of an obstacle course.

My conclusion on the campground isn’t all that favourable. Our $70 got us a barren square of dirt in amongst permanent vans. There is a small BBQ area but no camp kitchen or recreation area. The amenities are fine but so they should be for that amount of money. The Foodworks is just next door and it’s a short walk to the main street. 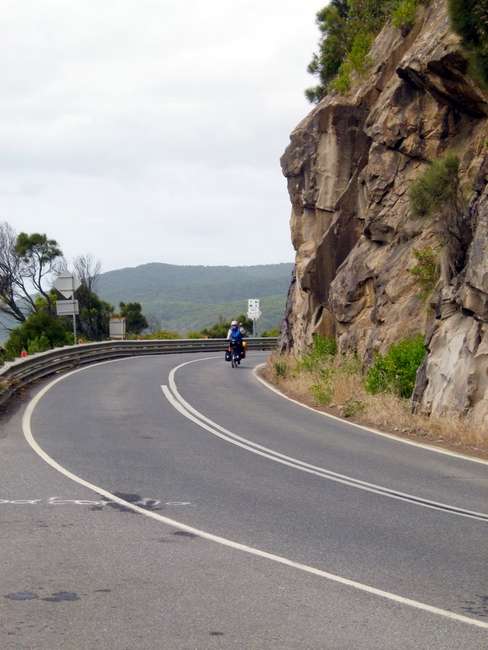 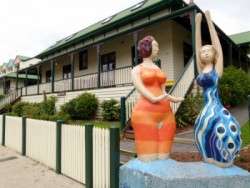 We had another early start for the final leg of the official Great Ocean Road and then onto Torquay (47km) to stay with friends. We had at least three descriptions, from other tourists, of the road ahead including the hills and none of them matched. There’s a steep climb about 6kms out called Big Hill which wasn’t too bad in quiet traffic and has a reasonable shoulder. As you climb out of Aireys Inlet there is another steep climb with quite a pinch. By the time we reached there the sun was coming out and it was getting warmer so that definitely got the heart pumping. 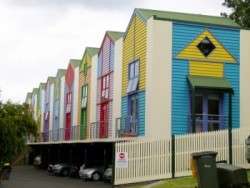 We stopped in Anglesea for refreshments and then hit the last climb long climb up to the top of a plateau and onto a really good road with a fantastic shoulder. The views over the ocean have ceased by now but there are views inland that are pretty good. You then head into Torquay itself, a lovely seaside town that’s very obviously seeing lots of development. Sunny blue skies always show off the best of the Australian coast.

In Torquay we stayed with friends I’d met years ago on a couple of the Great Victorian and Bicycle Queensland Rides. It was great to catch up and relive some of our antics of so many years ago. The big rides are a little bit about the riding and a lot about the social interaction and really enjoying yourself in the small towns along the route.

The day we rode in was our 25th wedding anniversary and I can’t think of a better present than to complete one of the most beautiful cycling journeys in the world. It truly is a great ride but my advice is to avoid it, especially Lorne, at peak season if possible. It’s over-priced, over-hyped and the weather wasn’t that much better than we’d expect it in spring or autumn, probably worse. If you have to do it be a bit prepared for a hit to the hip pocket and to find it very difficult to get out by yourself but certainly don’t miss it if you’re cycling across Australia. 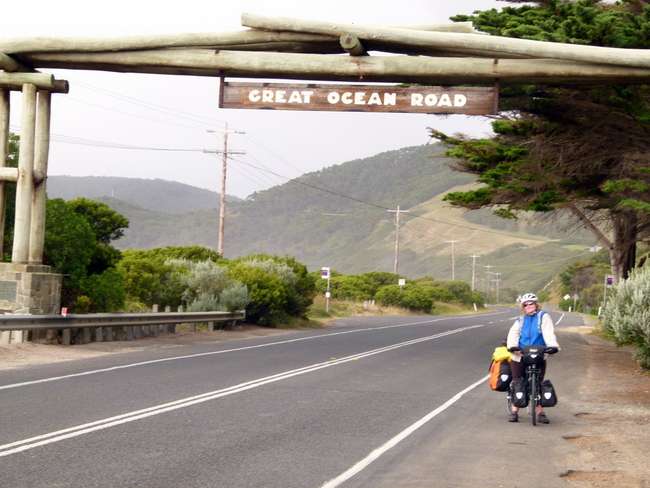 The End of The Great Ocean Road

Next stop Queenscliffe and the ferry to the Mornington Peninsula.