Heating up in Helsinki! Our last stop in Finland. 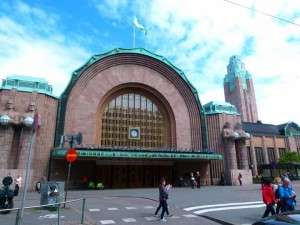 We were finally reminded what sunshine looks like on our arrival in Helsinki. It was only fleeting, but its warmth helped justify our decision to get on a train in Kokkola and leave behind the coldest Finnish summer since 1987. Three weeks later and we are still getting reports of daytime maximums of just 17 degrees C.

The train tickets had been expensive at around 85 Euro for us and the bikes but the process was pretty painless. The ticket seller had been at GREAT pains to give us very detailed instructions on how everything would work. We had to remove all our panniers to get them in the bicycle area  on the train, which could have been a real pain. We’d solved that problem by buying big “Chinese” shopping bags to pack them all in for getting on and off quickly. On the platform there was no hurry to put everything back together again. There were large lockers on the train, right by the bikes, where we could stash everything for the duration of the journey.

After reloading the bikes on the platform, we wheeled them through the busy main entrance and out onto the station plaza. There was an element of gypsies, drug addicts, alcos and unsavoury characters just hanging about but we pushed on past without any trouble and began our ride north to our Airbnb apartment 4 kms away. As we rode we took careful note of the tram and bus numbers of the route. The girls would be taking a rest for a couple of days while we played tourist. 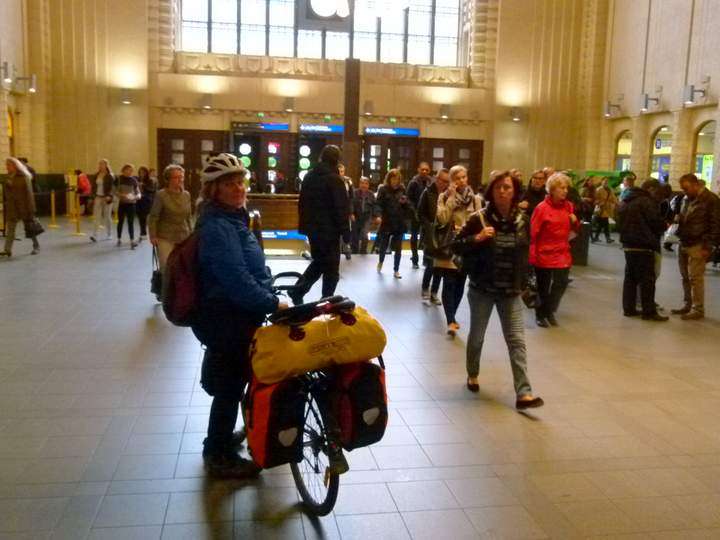 It was still quite cool outside, but the sun was pushing through and the skies clearing up for us. Everything looks so much more inviting in the sunshine! As it was getting on, we spent the evening at the apartment and got supplies from the shop just across the road. 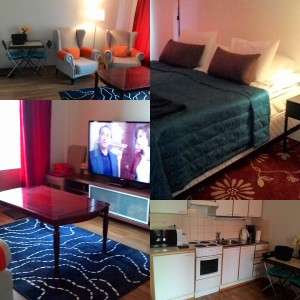 I have to say our apartment was perfect for us. A massive king size bed, luxury linen, a massive wide screen TV and everything required to cook a full scale meal in the kitchen. For approximately $67 AUD (Just over 40 Euro) a night it was way better value than a hostel, a cheap hotel or even camping. In fact, I couldn’t find much in the hotel range for less than 90 Euro a night ($135 AUD). In contrast to a hostel dorm room which start at about $35 AUD each, we had our own bathroom and heaps of space. A tent space would have cost us at least $40 AUD (27 Euro) and be overrun with rampaging kiddies at this time of year. There was even plenty of room on the balcony to secure our bikes. At a campground or hostel we would have been worried about security the whole time we were away from our stuff and hotels can be a bit funny about us wheeling them through the corridors and parking them on their nice clean carpet! The tram was about 80 meters down the road and a well equipped supermarket about 30m.

And here’s the kicker. Join Airbnb through another member (eg. Tim and Shazz) and you get the equivalent of $34 AUD/$25 USD/22 Euro off your first booking. You then get your own invite link which you can earn credits every time someone joins through that. So if you haven’t joined yet…Here’s our LINK. Why not start exploring. It costs nothing to join and you will be amazed at the top quality accommodation options you’ll have access to in almost every destination you can think of. (Wait til you hear about out exceptional bargains in Tallinn and Riga!) Here’s the link to the actual apartment. (Hmmm. I just checked and the price does seem to have gone up quite a bit! We really did get a bargain) 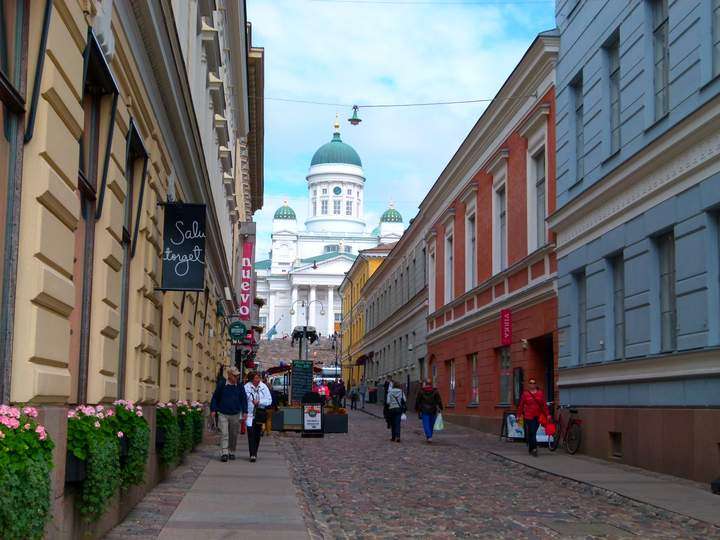 Anyway back to Helsinki. The next day was very sunny and we took the tram into the city. Our first task was to sort the ferry to Tallinn which required a long walk out to the Viking Lines office. It pays to check prices for different sailing times as they can differ widely. By going 1 hour earlier than we’d originally intended we saved ourselves 15 Euros. 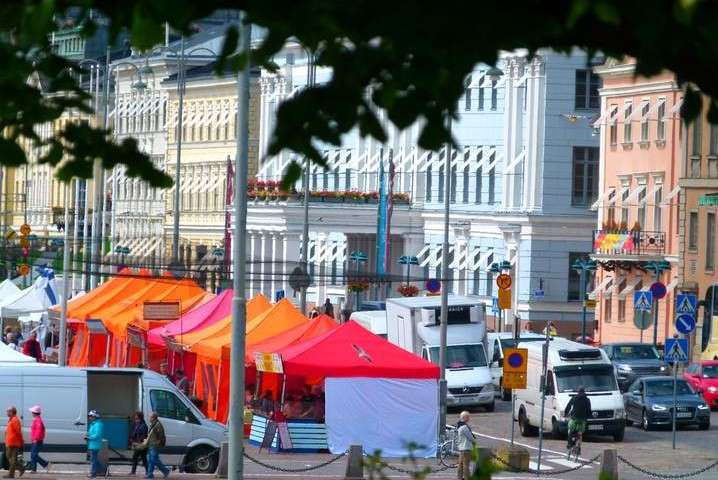 Open air market down on the Esplanade

Administrivia sorted, we grabbed lunch at the open markets at the Eastern end of the Esplanade, below Senate Square. You can get a pretty hearty meal of typical Finnish food for between 7 to 10 Euro. If it’s all a bit heavy, head to the  Old Market Hall and for a wide range of gourmet delights. It’s right at the start of one of the walking tours laid out in the FREE Helsinki Visitors Guide (available at the tourist information office). 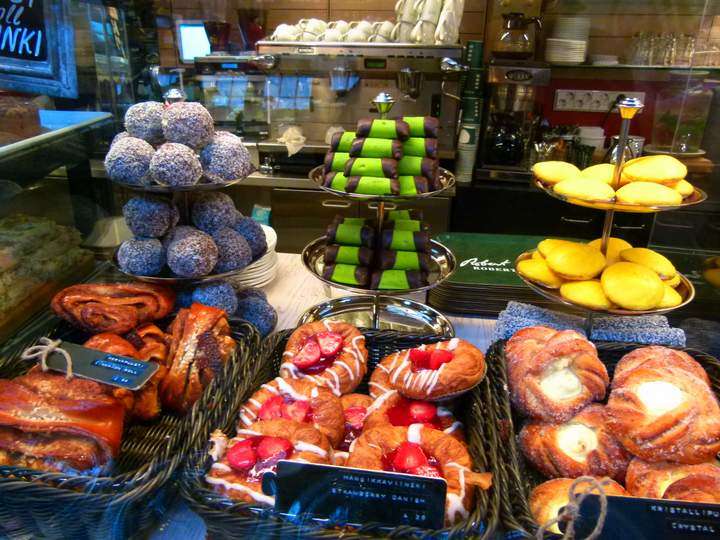 Some of the goodies available from the Old Market Hall

The Architecture and Modern Design walk focuses on the city’s architecture and design and is concentrated in the southern half of the city centre. Apart from lots of Functionalism and Modernism, Helsinki has the largest collection of Art Nouveau buildings in Northern Europe. we wandered the parklands of Kaivopuisto along Merisatama and back up through the fashionable Ullanlinna. 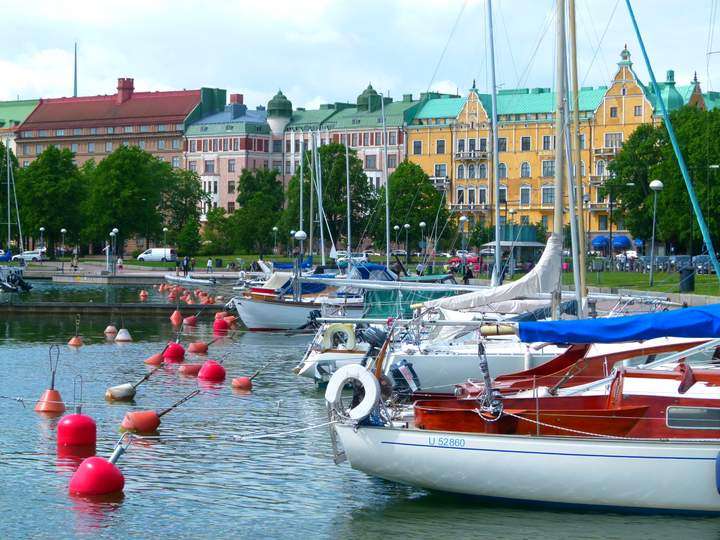 Down by the harbour

On Iso Roobertinkatu, we stumbled upon the Black Door Pub and found a seat outside on the street in the afternoon sun. The pub has about 20 craft beers on tap and a list of bottled beer to make your head spin. It’s a great place to park up for a while!! And let’s face it. After walking over 10kms for the day, we deserved a cool refreshing beverage.

The next day we found ourselves in the middle of the annual Helsinki Pride Festivities, held at Senate Square. This year’s celebrations were buoyed by the news that the USA had legalized same-sex marriage. Needless to say, spirits were quite high. 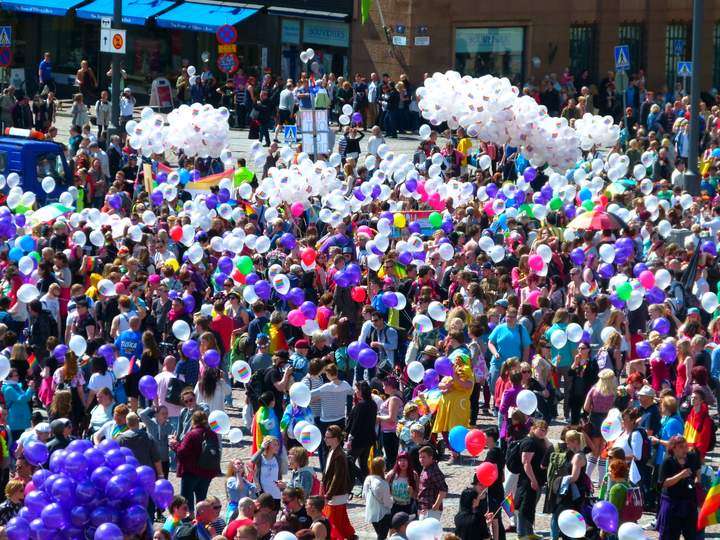 We spend about an hour at the square getting some very colourful pictures before heading up to the Kallio District for our next self guided walking tour. (The Alternative and Hip Kallio District walk) The densely populated, former working class suburb is loaded with lots of trendy, young people who have introduced hand-made art and craft as well as cafes and shops with their own distinct and quirky style. The small arty shops are in direct contrast to the major brand houses in the heart of the city. 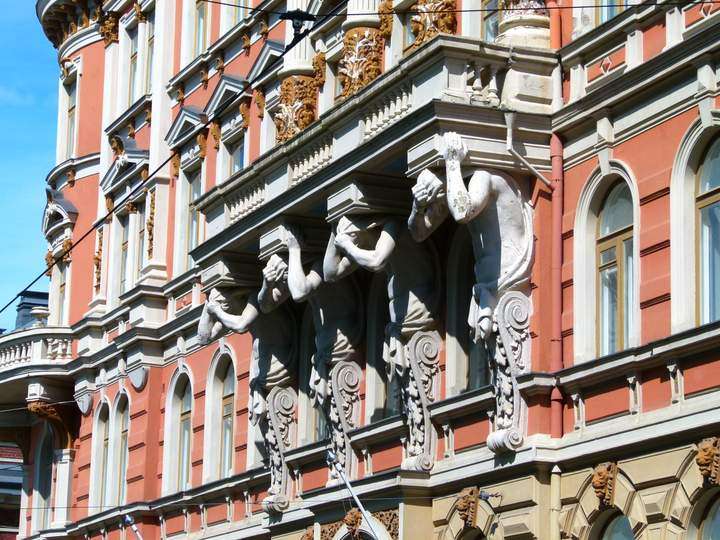 Just some of the beautiful Helsinki architecture

After a good look around using our free tour map, we headed back to the Black Door for a couple of well earned beers and a seat in the early evening sunshine. Helsinki was a great way to end our time in Finland. It’s a very attractive city thanks to some great architecture, lush park lands and a youthful population that impart their energy and style. The added bonus of sunshine left us with nothing but positive memories. 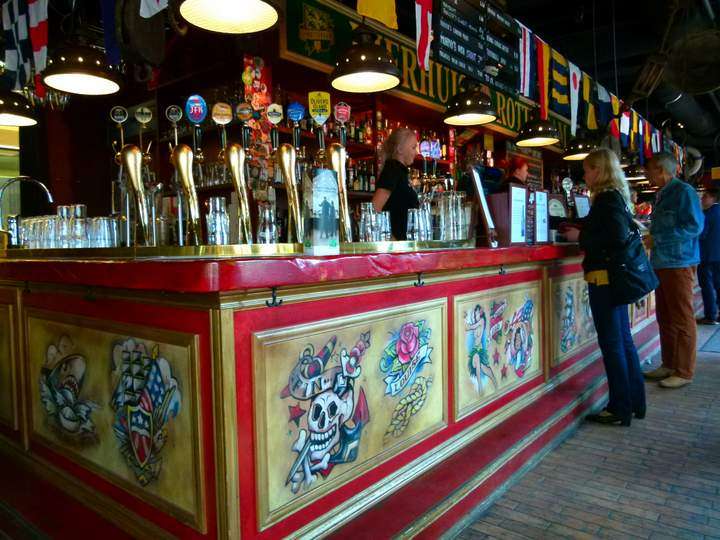 Another great pub in the centre of the city. The Rotterdam

Let Intrepid Travel take you to Helsinki, Finland and then on through the Baltic States…..Click this photo for details