We were very excited to be heading to our first new country on this trip. Both of us were really looking forward to the Baltic States. No-one we’d talked to had a bad word to say about them, and Tallinn, Estonia was high on the list of everyone’s favourites. We loved Finland but it was definitely time to move on. 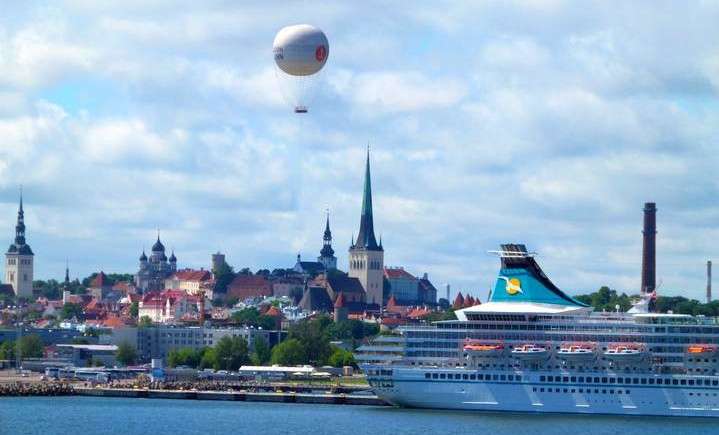 Certainly our first glimpse of the city was enticing. Turrets and walls towered in the distance above the harbour as the ferry docked. In no short order, we were off the boat and headed towards our latest find on Airbnb. The route we needed to take skirted the old town, providing us with an enticing glimpse of what was on offer. Sunny blue skies and lots of smiling people enjoying the balmy weather were contagious, and I had an overwhelming surge of happiness. Life was good. 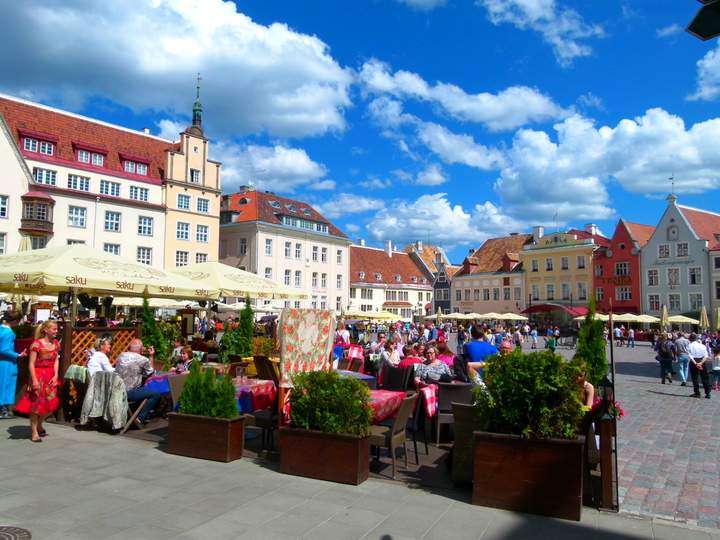 We were very pleased to discover that Tallinn has lots of bike paths and lanes that make cycling around the city pretty safe. Drivers didn’t, however, seem to exhibit the same amount of care and diligence that we’d experienced in Scandinavia. Mental note: We should probably start looking at the traffic before we cross intersections rather than trust that cars would stop for us. (Seriously though; we never stopped doing that after spending 12 months in Saigon, self-preservation becomes ingrained.)

Once again, our chosen apartment was near on perfect. While the building is a lovely traditional apartment block, the apartment itself is modern, well located, secure and had plenty of room for our bikes. And, once again, it was less than we would pay for two beds at a cheap hostel that would have had none of the comforts of home. (CLICK HERE for a special gift from us to you when you join Airbnb – $25 USD off your first booking) 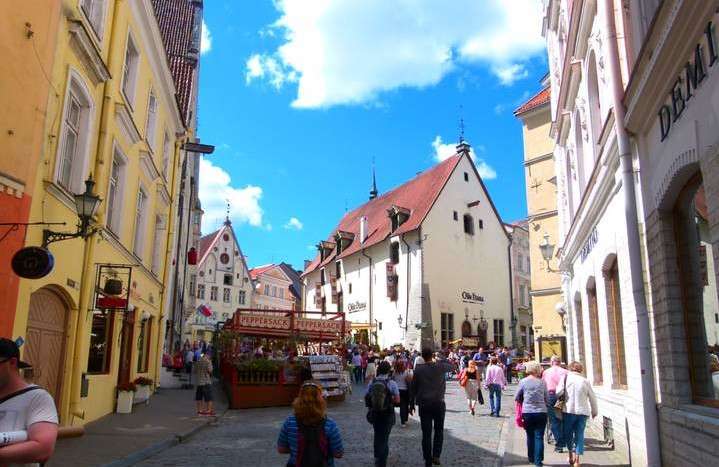 Marvel at the well preserved architecture in the old town.

Tallinn is another of the Hanseatic cities we have visited. Its gable fronted guild houses that lend a fairy tale like appearance are nowadays referred to as “Tallinn Gothic” and make it one of the world’s best preserved medieval cities in the world. UNESCO listed it as a World Heritage Site in 1997. Add the well-preserved city wall, the cobbled streets and the abundance of fine eating and drinking establishments and we knew we were on a winner!! 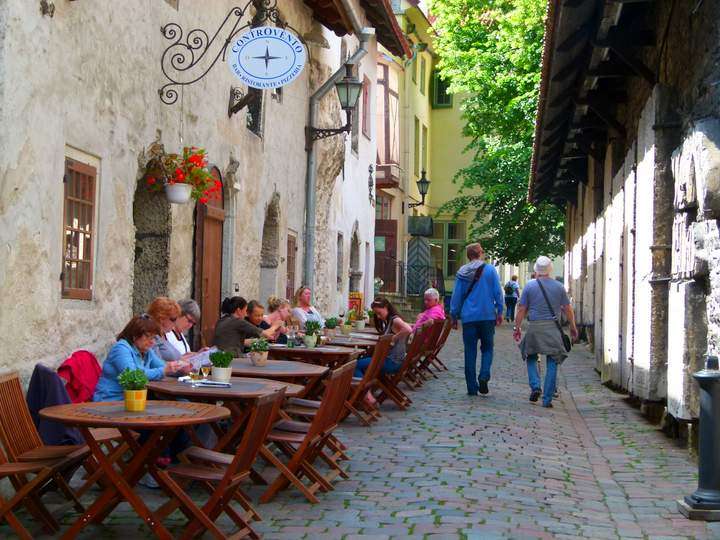 We spent the next 3 out of 4 days exploring every nook and cranny of the old town, with plenty of time to branch out to sight farther afield. The weather was balmy, reaching up to 28 degrees on a couple of occasions. The fourth day wasn’t so crash hot, but we’d planned ahead and assigned it as our maintenance day. Washing was done, blogs written, bikes cleaned and administrivia dealt with. 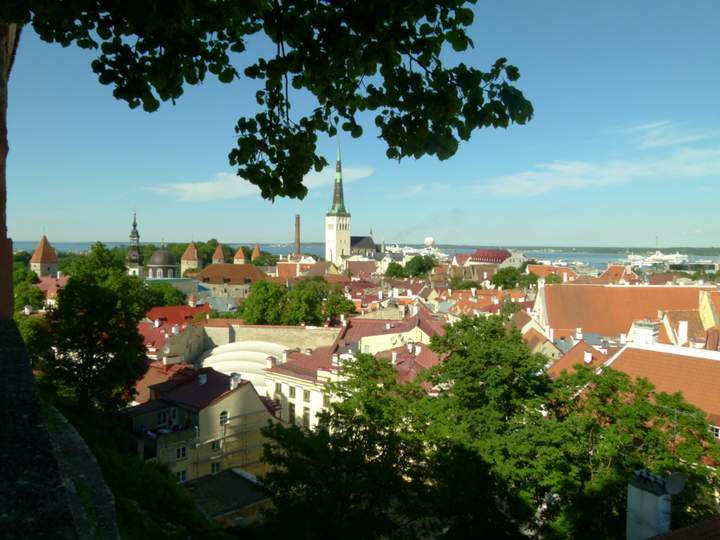 Just one of the viewpoints around Tallinn Old Town

About midway through our explorations I blurted out that “Tallinn makes me happy!” Yes, I know that sounds weird and just a little trite but it did. It has a great vibe. Sure there were loads of tourists, including plenty of stereotypical loudmouths that make us cringe, but Estonians seemed to deal with the deluge extremely well. Service was efficient and extremely pleasant. And we were humbled by the number of people who spoke incredibly good English.

Wandering the streets of the old town is sheer pleasure. Around every corner is yet another fabulous picture opportunity. I do believe we touched on every single lane and street within the walls, along with many more just outside. Tallinn has many green spaces, with one of the largest leading to the Kadriog Palace, now an Art Museum. 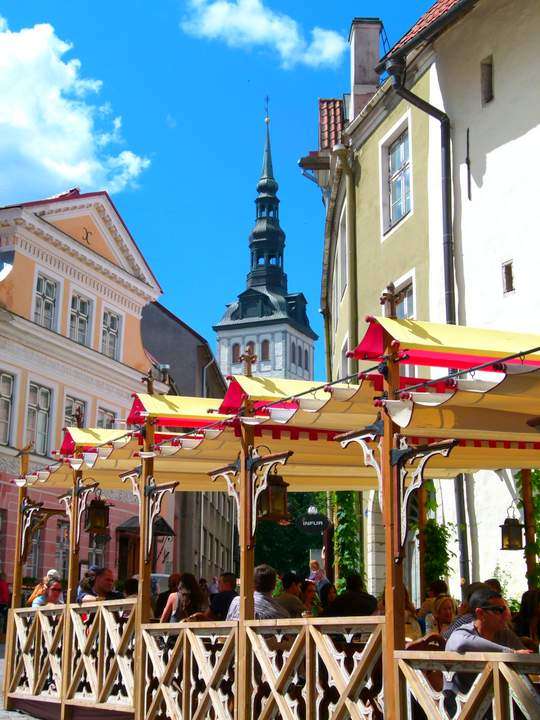 Sunshine is the icing on the cake – Tallinn Old Town

Maybe it’s just being Australian, where our oldest buildings only hark back to the 18th century, but the sheer amount of old stuff quickly reminded us we were in a very different place. Tallinn had survived almost completely intact from centuries of conflict and it is quite simply BEAUTIFUL. We did have a chuckle when a “knight” pulled off his helmet and chain mail and dropped into the cafe we were sitting at. Not too many places where that happens. 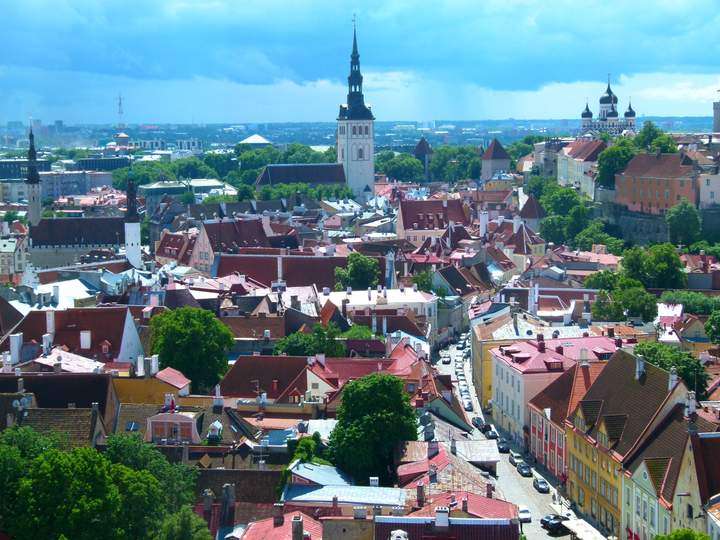 You have to climb to get the views – St Olafs, Tallinn Old Town

Big confession. We didn’t actually pay to go inside any attractions EXCEPT to climb to the top of St Olaf’s Church. At around 190m, was the tallest building in the world at the time and has panoramic 360-degree views over the city. (NOTE: If you don’t like very steep, uneven stairs leading to a very high place with seemingly rickety safety infrastructure, this one is not for you!) For us, the pleasure of the city lay in wandering the streets and chilling in the cafes, restaurants and bars and watching the world go by. We would walk for hours and then chill for a few more before heading home to the comforts of home. 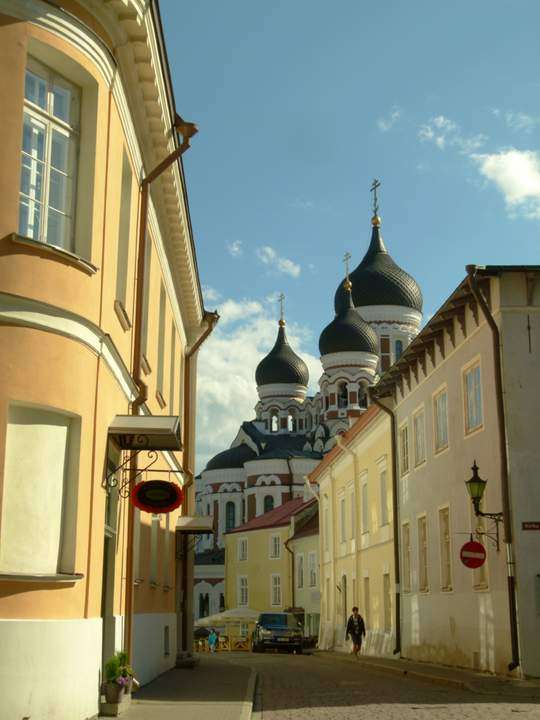 Things were sooo much cheaper than in Scandinavia. Where we would previously buy a kebab for lunch and wince at the dent in the budget, we could now enjoy a plated gourmet feast with a big pint of beer for less than the same amount of Euros. The beer itself was awesome and once again, comparatively cheap. I must admit there was A LOT of overcompensation going on. 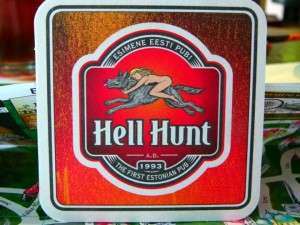 Drop into the Hell Hunt and sample their special brews

Back to the beer. For those of you following us on social media, it seemed that we took a good number of photographs in drinking establishments. Don’t get the wrong idea. We are not (YET) raging alcoholics. But, the sheer number of unique pubs and cafes, with truly excellent beer, certainly made for some great experiences. The phrase “kid in a candy shop” comes to mind when I think of Tim’s reaction to the shop with over 600 beers! Not since Belgium did it seem we’d had such excellent choices. Our favorites places for an ale include the Hell Hunt, the oldest pub in Tallinn, and the Beer Office, a themed pub modeled on Scotland Yard. Hell Hunt came well recommended by our good mate Simon McKenzie, The beer Office we just stumbled on.

The other wonderful discovery was “Beer Snacks”. I am a BIG fan of antipasto and this is exactly what these delectable treats are. For less than 10 Euro (sometimes well less) you could get a huge plate of meats, cheeses, pickles, olives, garlic toast and more. Quite often we didn’t even bother to have lunch or dinner and would just wait till beer o’clock to order one of these. 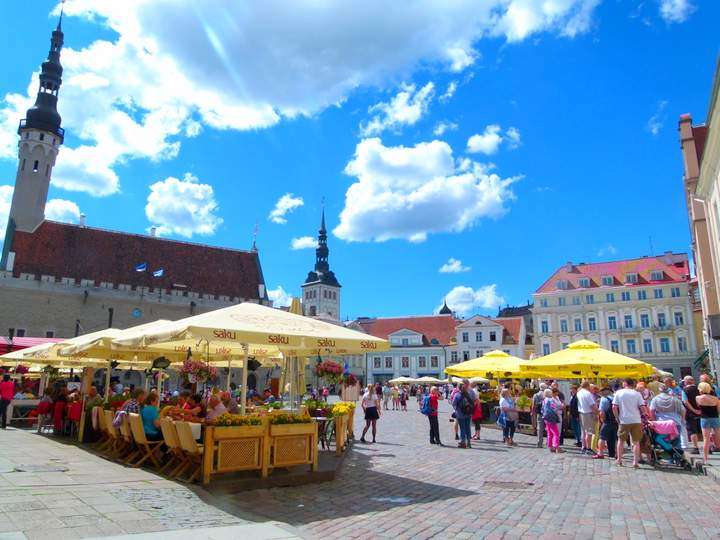 Tallinn has a vibrant cultural scene. There was a massive beer festival going on just outside of town on the last day we were there featuring many well known international acts. I know you think we would have been there like a shot but the festival is actually more about music these days although beer does feature heavily. Tickets were a very reasonable 19 Euro per day but with two of us we decided to commit the funds elsewhere. There was more than enough to keep us occupied.

A big thumbs up for the public transport system. Did you know that citizens of Tallinn don’t need to pay for public transport at all? No wonder it’s so efficient and well utilized. We were close by the train line and not much further to a busy bus stop, and we never seemed to wait more than 5 minutes for a suitable ride to come by. Tickets were cheap and are made cheaper by buying a transit card that can be purchased at lots of locations. We didn’t bother as we were only taking two trips a day, preferring to walk everywhere else. 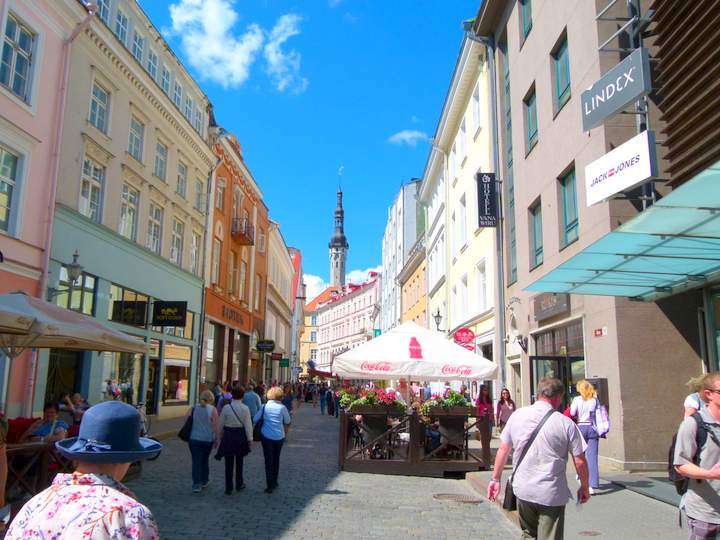 Lose yourself wandering the streets of Tallinn Old Town.

So there you have it. Sorry there are no long winded explanations of individual sites or lists of things of “must do’s”. Just drop into the Tourist Office or explore the Tallinn Tourist Information Site and you’ll find ample information on those. Our advice is to simply grab a map and wander to your hearts content. When you’re hungry, drop into the first restaurant or cafe you come across. when you’re thirsty, do the same. I don’t think you’ll be disappointed by anything in the beautiful Tallinn, Estonia.

Our big HANDY HINT for Tallinn would have to be to check train timetables beforehand as very few trains run from around 11am to 1.30pm (siesta!) We got caught being a bit lazy on our first day but once we knew, were able to plan accordingly.

Note: This post is now available as a GPS Guided Travel App. Get the most out of your visit to Tallinn and DOWNLOAD it for free HERE.