Welcome to Victoria, Cycling from Mt Gambier to Warrnambool 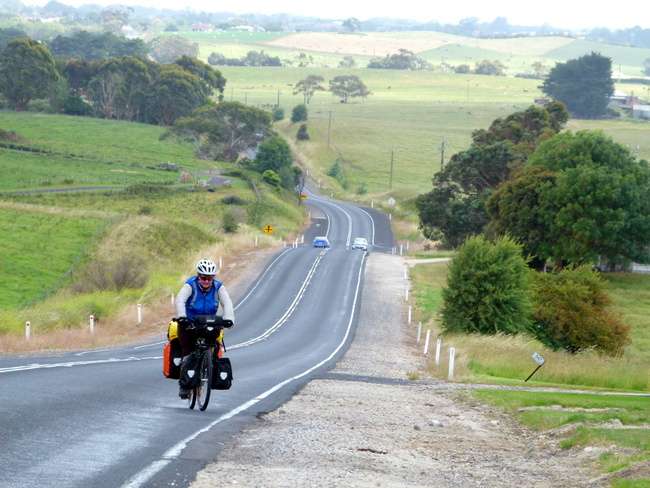 Heading into the Xmas period the pressure to be places and fit in with other people’s schedules started to mount. We’d made a promise to be home in Broken Hill for Xmas but really had had no idea where we would be when the time came to abandon the bikes and find a way back. We figured Melbourne but bad weather, too many places to visit and an opportunity to go bush with Tim’s brother meant we would either have to cycle like hell or pull up short. 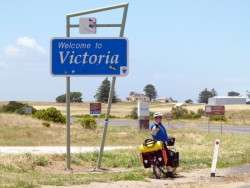 A quick look at the options revealed that a train went directly to Warrnambool to Melbourne, where we had some mates who could look after the bikes while we took a further train to Wagga Wagga, met up with our family and then hitched a life back to Broken Hill well in time for Xmas. Whew!!!!. It would be a round-about way of getting there but it came with a couple of big bonuses. Firstly we would be able to catch up with our mates who had inspired this trip in the first place. We may have missed them if we’d left it any later. Secondly, we were able to meet up with one branch of the family we thought might miss and then there was the promise of a trip to a rural property where we had an opportunity to catch some yabbies (fresh water crayfish) and rabbits (Tim favourite meal is his mums roast rabbit). Both of us are raised in the outback and enjoyed many a trip like this when we were kids. Sadly our city lives and world travels hadn’t offered up opportunities to relive the good times until now and we were really excited. 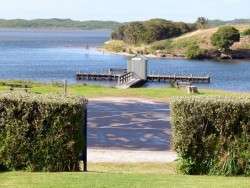 With the pressure off we were more than happy to do fairly short distances to Warrnambool and our first stop was just 36 km away in Nelson. The ride down from Mt Gambier was quite nice. The headwind turned into a tailwind and whilst there were a couple of hills there was nothing too big. The only drawback was the amount of logging trucks on the road. Locals kept telling us the numbers were nothing like it used to be but there were more enough to keep us on alert and we were only too happy to be doing a short ride.

Nelson is a pretty little place on an estuary. Fishing is obviously the big activity here and you can hire everything you need if you don’t have your own gear. The pub has character and was quite busy with locals and tourists when we were there. Although the service in the Bistro was appalling, the food was pretty good value as the portions, even the special, were huge. 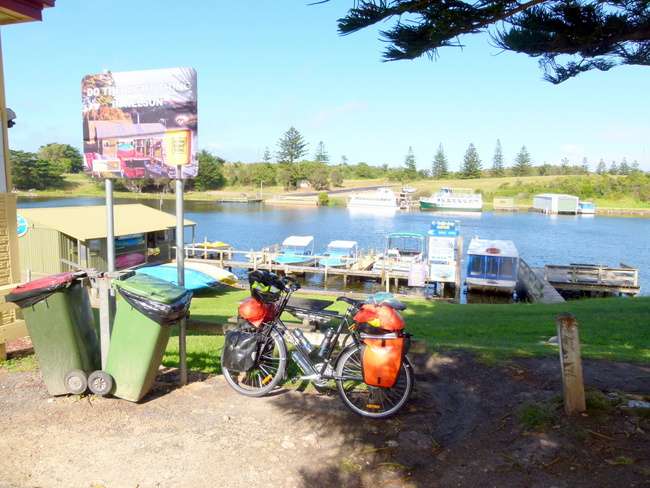 We stayed at the small River-Vu caravan park near the water where we grabbed an ensuite cabin for $67 as the weather was turning foul again that night. That meant we spent a comfortable night in the warm while the wind and rain howled around us. We really couldn\’t believe it was so cold in December. It was definitely something we hadn\’t planned for. 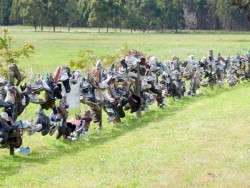 Anyone lost a shoe?

The next day, after examining the weather forecast on www.weatherzone.com, we decided to make a late start as the rain was meant to ease off. We had just under 70km to ride and had decided to bypass Portland itself and head up to Henty Beach. The ride turned out to be one of the most unnerving yet. The road is pretty crappy in a lot of places with a rough shoulder, lots of pot holes and dozens of very big logging trucks that also have to cope with the shitty conditions. We spent quite a lot of time hurling ourselves onto the side of the road to avoid a serious accident. There is one long steep hill to a look-out but we had a tailwind so coped quite well. Other than that the road is pretty flat. I\’ve never been so glad to turn off a road as I was when we headed north of Portland to Henty Beach via a side road. 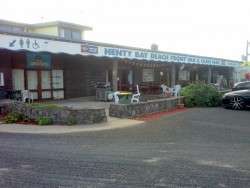 There are a couple of campgrounds identified by WikiCamps in the area. The first one we got to was Dutton Way Caravan Park. We took one look at it, and the surrounding area, and rode straight on. When we arrived at the Henty Bay Beachfront Holiday Park we were glad we did. It has a lovely outlook, grassy sites, good amenities, a well equipped camp kitchen and a bar/restaurant that does meals at night. The new managers are friendly and helpful. We were able to check into their bunk house for $30 per person. Being off-season meant we had the whole building to ourselves. The bunkhouse is extremely comfortable. Brand new mattresses, a lovely lounge area and a big well-equipped kitchen make for a cozy stay. It would be a great facility for families who want to go on a camping holiday together but don’t have their own gear. The food in the restaurant is extremely reasonable and we sat up to great value $8 pizzas for dinner while we played music DVD’s from the 80’s. 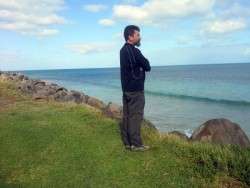 With the weather still iffy, I called ahead to Port Fairy and booked a room in the local Youth Hostel. We had a cruisy 65km ride into town with a tailwind and were sorted before 1pm. The absence of logging trucks was a big relief and the road was pretty good.

The hostel is in a lovely historical building with a huge kitchen, comfy lounge area, a dining room and a BBQ area. It’s really central to everything and the managers are full of good local information including safe cycling routes in and around town. The twin rooms are quite small for the price but the doubles are very comfortable. Kadir locked the bikes up in his garage which meant a stress free visit to the local sites. 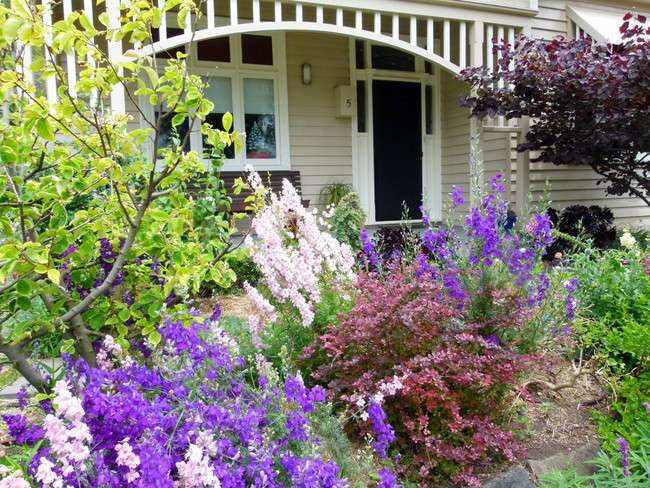 Port Fairy is a lovely place. It has lots of lovely old buildings, some veeerry nice boats moored in the inlet to admire and some great walks along the coast and out to the lighthouse. We grabbed lunch at the local chicken shop on Bank street. It served delicious chicken and amazing salads that made a great meal just by themselves. Highly recommended. 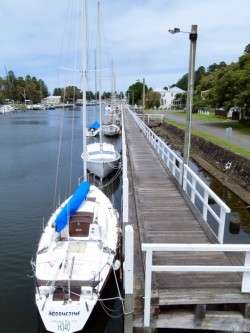 Our last stop before holidays was Warrnambool. It’s a short 27km ride from Port Fairy and you can get off the main highway for much of the way if you choose. The shoulder, however, is quite wide in most places and if you’ve made it this far, the traffic isn’t anywhere near the hassle it was earlier on. There\’s a picturesque detour, down and around Tower Hill if you have the time.

Our first stop was the train station to book our tickets ($31 each) to Melbourne for the next day. The guy selling the tickets couldn’t guarantee we could get the bikes on the train but said we should just turn up and see. Apparently it’s at the discretion of the conductor. In truth he seemed to take a bit much pleasure in breaking the news which got up Tim’s nose no end.

We then headed down to Fig Tree Holiday Village where we wimped out again and grabbed a cabin with private facilities just outside the door for $75. It has an indoor pool if you’re up for a swim and is a short walk into the main street. The girl behind the counter was very chirpy and helpful which makes all the difference to our impression of the place. 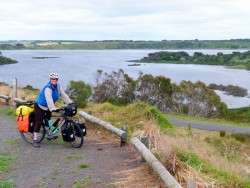 Warrnambool is the biggest place we’ve been in since Adelaide. Things were buzzing with Christmas activities but we were more interested in finding somewhere we could watch the cricket. The Aussies were giving the Poms a run for their money in the Ashes series and that made a nice change from the past few years.

The next day we fronted up at the train station a bit worried our plans might all go to shit if they didn’t let the bikes on. In the end it was an easy matter to load them on the train and spend a relaxing 3 and a half hours making our way into Melbourne. We were sad to be leaving the bikes but we will be back in the saddle in a couple of weeks when we’ll be returning to Warrnambool and heading out on one of THE iconic road trips in Australia, The Great Ocean Road. 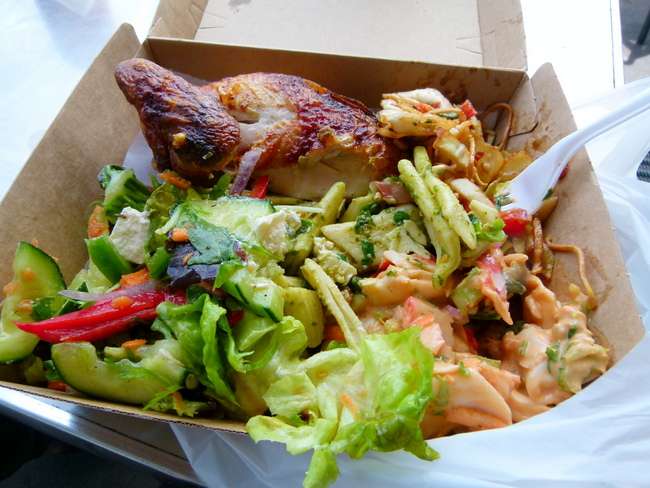