We didn’t know any different…Still Bicycle Touring in Lapland

The weather has been cold wet and windy interspersed with bright, sunny clear spots. That was what we’d expected. That was why we’d bought a whole heap of new warm and dry clothes. It wasn’t til the locals started passing comment on how unusually cold and wet it was that we realised we were cycling in unusually challenging conditions. 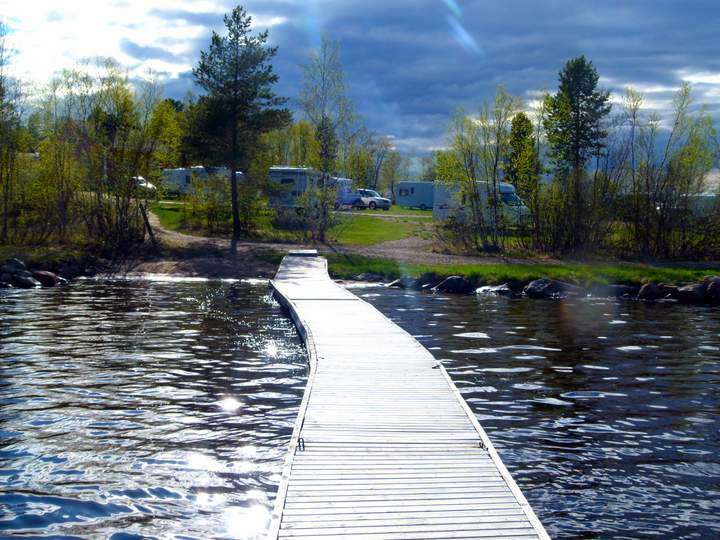 Anyway, the upshot of all this is to come prepared and stay prepared when bicycle touring in Lappland. Whilst you can get a general idea of the forecast a few days out, you really have to be checking things right up to the night before. It’s been remarkable how things can change in the course of 48 hours. You also need to check several weather sources. A little unbelievable how different they can be. Our favourites include: 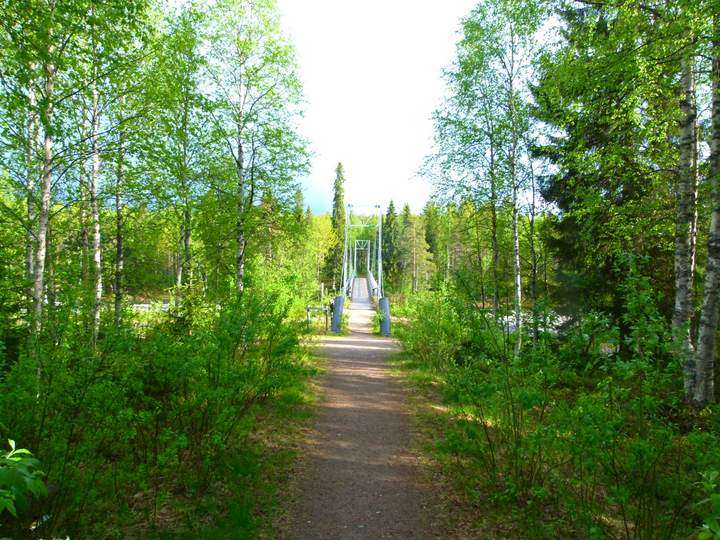 We have, if anything, been over cautious. Staying in places a little too long to catch a favourable wind or dodge the elements. In hindsight we’ve probably lost a total of two or three days. However, our ability to cycle far further than we thought at this early stage (because we’ve been rested and in favourable conditions) have made up for all but one or two of those. 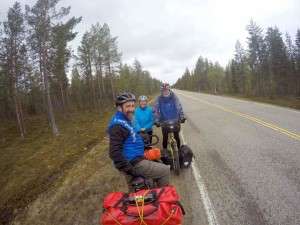 Dutch cyclists on a tandem on their way north

We’ve been totally bowled over by the number of other touring cyclists we’ve met up here in what we thought was one of the most isolated parts of Europe. Looking back we met less than a dozen in the whole 6 months cycling across Australia. We’ve met at least that many in the first two weeks. It’s interesting to us the diversity of cyclists and bikes who are hitting the trails up here. We are certainly not the oldest on tour. We’ve met several couples who are at least mid 60’s. We are not carrying the most luggage, although we are up there. Several couples that we met are carrying no cooking or sleeping gear, preferring to soldier on the the next available bed. That’s no mean feat considering some of the headwinds we’ve faced and how far between towns it is in the far North.We’ve met couples on tandems (no way in the whole wide world we’ll ever do that!!) and those choosing road bikes and trailers over touring bikes and panniers. We even met a guy riding a fixed gear!! Madness. It’s been heartening to meet so many Fins out their exploring their own country. We’ve yet to meet any Antipodeans, or in fact anyone not from Europe. 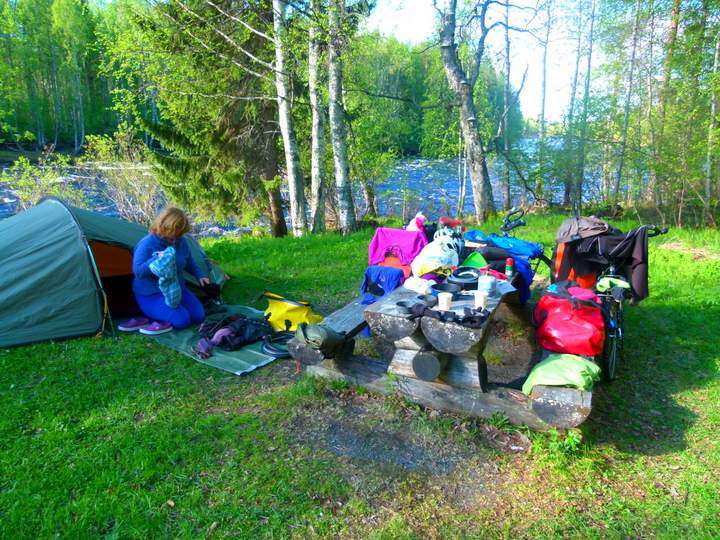 Another beautiful wild camp on the banks of a river

The wildcamps are plentiful and very beautiful. I think our favourite so far has been a spot by the river at Vikakongas. As part of the Arctic Circle Hiking Area  it had great grouping of huts to stay out of the weather and a fireplace where you can stay warm and grill some snags (sausages for those non-Aussies). There are many different types of huts for public use throughout Finland and the great majority are free. This is a great App to locate them. https://play.google.com/store/apps/details?id=org.laavu Here’s a resource to explain the different types available http://www.outdoors.fi/huts 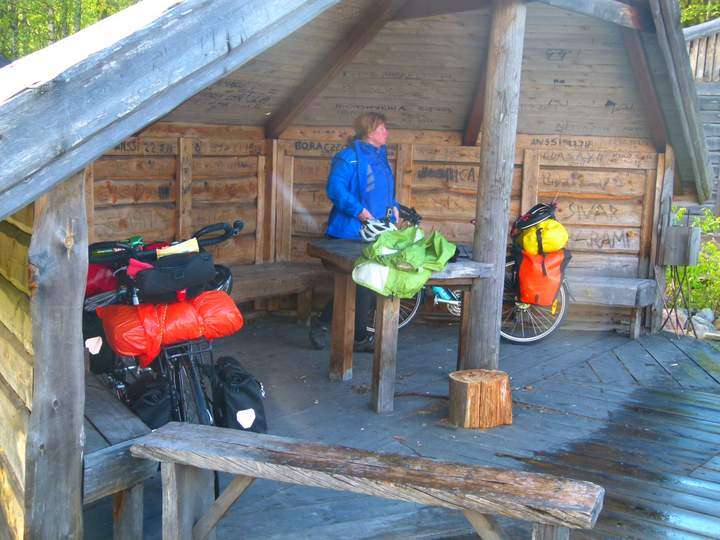 An example of a free shelter. There are over 3500 across Finland

The campgrounds are well equipped and we have to have a shower and do the washing sometime.. We’ve stayed at Urumiemi Camping, 2km south of Inari (in a comfy cabin for 40 Euro per night)  Ivalo River Camping (a bit rough around the edges) and The Orakoski Camping  just south of Sodankyla, 15 Euro for tent and two people. (They were really, really nice people and had good facilities. Some weren’t open as it is very early in the season but the signs are all there) 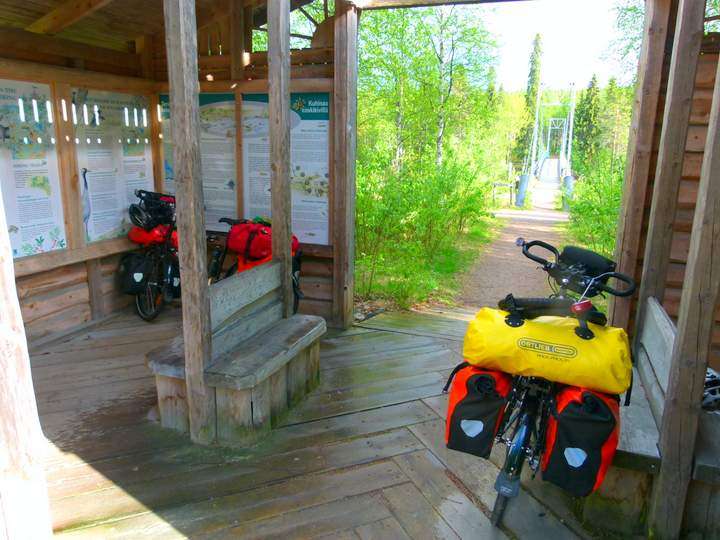 Sheltering from the elements in Vikakongas

We have been so very fortunate to have had almost a third of our nights hosted by peeps from warmshowers.org. It’s a great organisation and we will definitely pay our dues once back in one spot.

We woossed out once because of inclement weather and got a room at the very nice Saariselka Inn (just 50 Euro for a great room through Booking.com). On our next ride to Kemi we’ll be going Airbnb as there are no hotels under $120 AUD anywhere within range of Kemi (no campsites either). In contrast for just $35 we get a room with locals who are full of information on our way South. Even a home cooked breakfast has been offered as we’ll be cycling through the night to avoid the rain. (Join Airbnb through THIS LINK and get $32 AUD off your first booking. A gift from us and Airbnb to you 🙂 ) 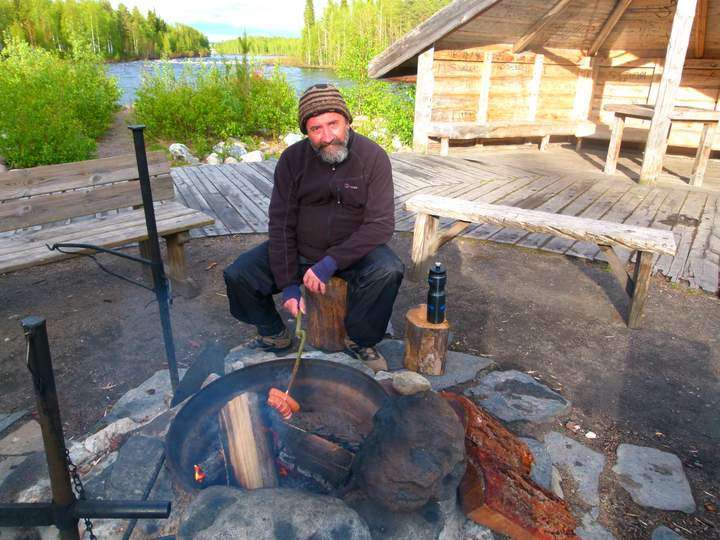 A big hint on eating fairly cheaply in Finland. Check out the restaurants in the K-Market. Many of them have a very good buffet, usually for less than 13 Euro. That might sound a lot but it normally includes soup, main courses (including meat dishes), salads, vegetables, coffee, tea, a drink, bread and dessert. Load up for lunch and you won’t need much for dinner. The other great deal is the soup lunches. Whilse the idea of soup doesn’t sound like much, they are extremely filling and include a healthy serving of chunky bread, dessert, coffee, tea and a drink. More than enough nutrition to refuel a hungry cyclist’s body. Our favourites so far include the salmon soup lunch at the small souvenir shop near the YHI turn off at Raudonjoki (about 40km south of Saariselka) and the Feenix restaurant in the K Market complex in Rovaniemi. And then there’s the very welcome coffee stops that usually include a sampling of the local pancakes with cloudberries. They definitely keep the energy levels up. 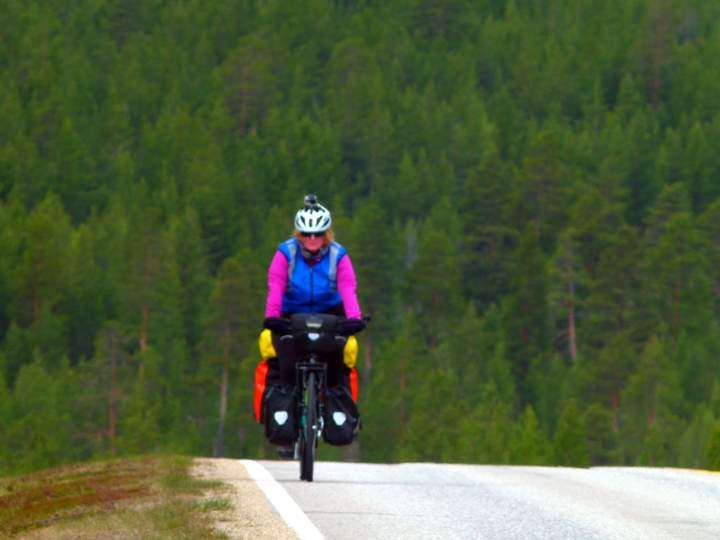 For those interested in facts for our bicycle tour in Lapland so far:

It’s about 40km from Inari to Ivalo on a quite busy road (E75). There are bike paths on either side of the road in both towns for around 5km’s. There are well stocked supermarkets in both towns. You can get a prepaid Finnish SIM card from the R market (newsagent) in Ivalo. (about 200m north of the Information office on the same side of the street)

The 29 km ride from Ivalo to Saariselka is just about all uphill, if only slightly in parts. You get up above the tree line so the wind plays a huge part in the comfort of your ride. There’s a well stocked supermarket in town.

Saariselka to Sodankyla is quite flat It’s a total of 130 km. It’s a very busy road with a lot of trucks and not much shoulder. Ripple strips in parts just increase the annoyance factor. There are several great supermarkets in town, the largest is the K Supermarket on the southern end (off the round-a-bout). Fantastic Pizzas at the Turkish restaurant on the opposite side of the road to the S market and a little north. The small pizzas are huge and enough to feed two. The salad bar is included. We headed south a further 10 kms to stay at Orakoski Camping.

Sodankyla to Rovaniemi (130km) has its hilly spots. We call them “rollies” with a tail wind; “hills” with a head wind. If you have the time spend a night at Vikakongas 1 km south of Vikajarvi. It’s on the left. Pull in where you see the Information sign. We stopped because the weather had conspired against us but we are very happy we did. Vikajarvi has a small supermarket serving hot chocolate and coffee plus usual assortment.It closes at 6pm.

Father Christmas land and the Arctic Circle are about 8kms North of Rovaniemi. The road up to there is busy and quite “rolly” but there is a bike path all the way into town from there. 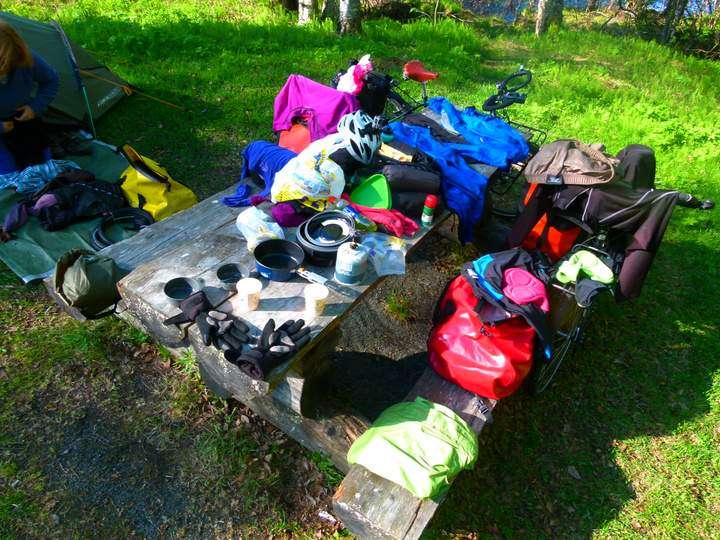 How do we get all that and more on the bikes????

Until our next post in a week or so, happy riding.