It was a short comfortable ride from Ruse, and once again we were thankful we’d decided to put the bikes on public transport. Narrow, crowded roads, with next to no shoulder would have made cycling a nerve wracking proposition. And the detour off the main freeway through steep inclines would have tested our endurance. 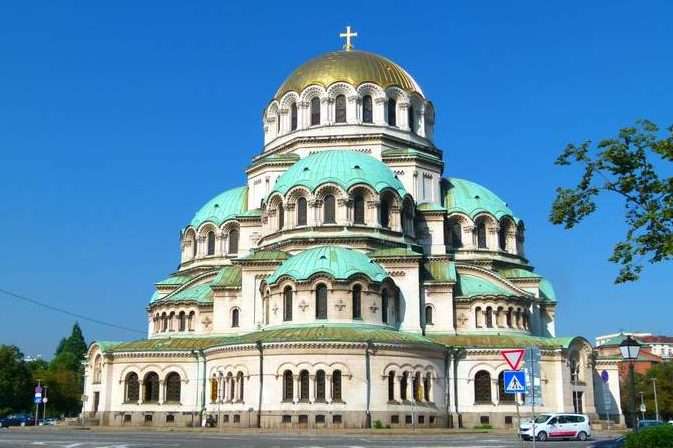 Our first sight of the magnificent Alexander Nevsky Cathedral in Sofia

As it was, we arrived in Sofia with plenty of light to spare. The bus and train stations are next to each other on the northern edge of the city center. Once we’d reassembled the bikes and loaded them up, we headed next door to the international bus station to see if we’d be able to get them on a bus to Belgrade in Serbia. As a long line of depressed-looking backpackers wound out of the office door, we decided to cut our losses, head for our Airbnb apartment and do it all another day. Afterall, we had a week here.

The afternoon had gotten away from us as we settled into another lovely apartment on the east side of town.  With plenty of secure space for the bikes, a washing machine, excellent WiFi, and fully equipped kitchen, it was an absolute bargain at 22 Euro a night. We decided to do a shop at the small market up the road and kick back for the evening. It had been a long day.

PS. If you don’t have an Airbnb account yet and want to check out some of the incredible accommodation bargains available all around the world, use THIS LINK to join, and you’ll get up to USD 40 off your first booking. 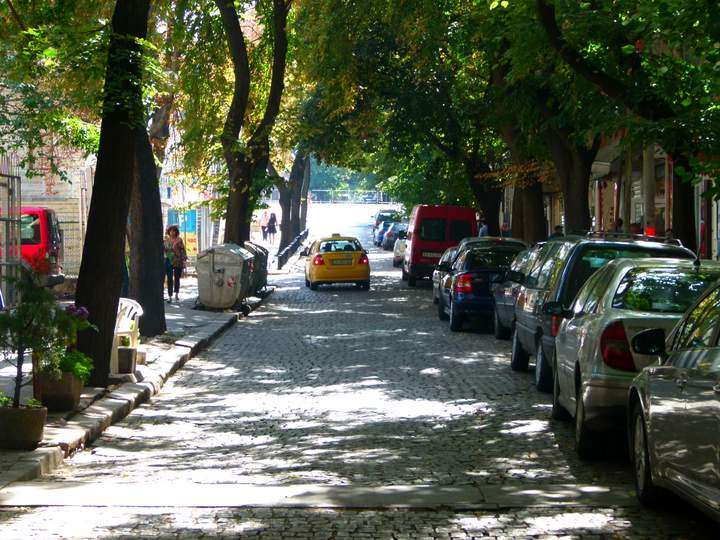 Sofia is the greenest of all the capital cities in Europe. We know this because we were told by Ani, our lovely guide from Sofia Green Tour on a free cycling tour around the city. And after an excellent afternoon out and about on the bikes, we agree that it’s probably true! Sophia isn’t really a cycle-friendly city, with its crisscrossed tram tracks and freestyle parking practices, but you can easily get around by connecting its multitude of conveniently placed, lovely green parks. Our time spent on the streets was minimal as Ani led our conga line of bicycles through one park and into another. Along the way, she would stop and point out some strange and quirky things which you probably wouldn’t read about anywhere else. 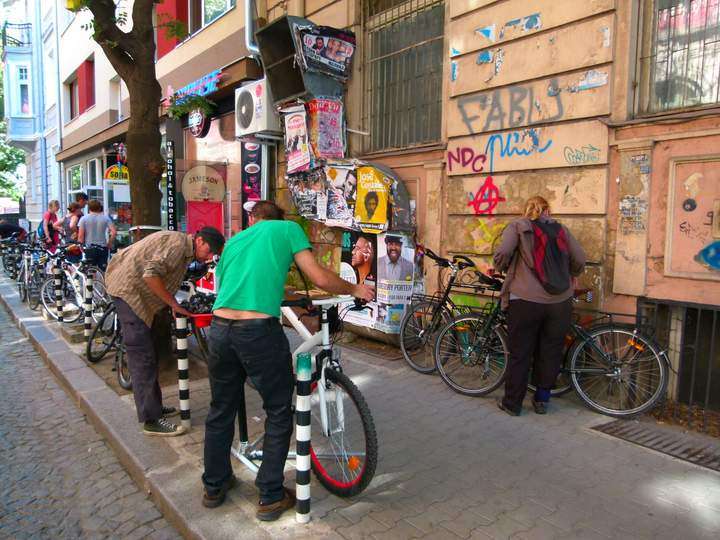 Getting ready for our bicycle tour of Sofia Bulgaria

In one of the parks,  we surveyed a rather stern-looking, Soviet-era, military statue called the “Monument to the Soviet Army.” Apparently, anonymous groups of artists had taken to painting it in different colors depending on the latest political occurrence.  It had become an object of dark humor amongst locals, but eventually, the Russian Embassy complained it was disrespectful (duh!) and had a 24-hour CCTV camera and a couple of sleepy guards mind it at night. 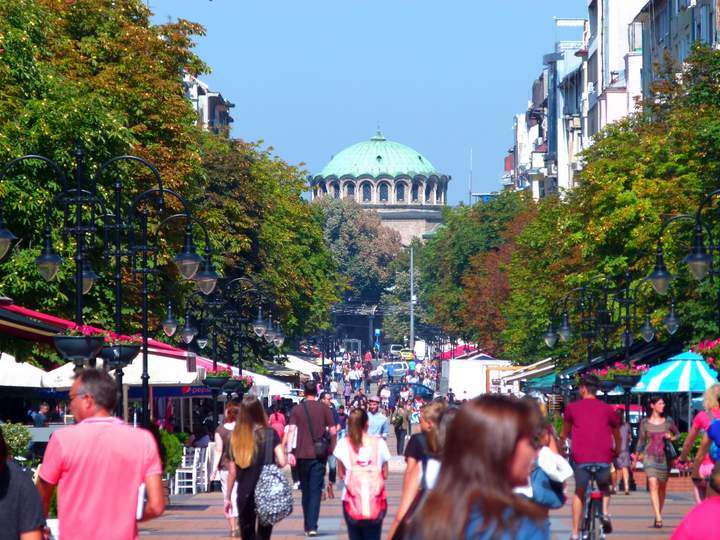 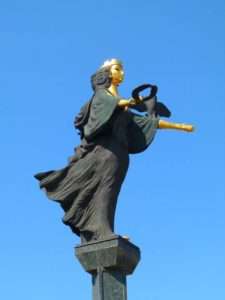 St Sofia herself stand vigilant above her green heart.

Each park along the way was assigned to different sections of the public. Some were primarily for animals, some for festivals, some for children and others for young people. Mountain bike trails crisscrossed through one large, heavily treed park in the middle of the city. This was the first time we’d had the bikes on a mountain bike track, and it was fun. I’m not sure if the bikes liked it so much though. The girls are steel framed and have no suspension whatsoever – this made for a pretty rough ride for the two of us.

Sofia is quite pretty around the centre with its colorful facades and yellow, cobbled streets. Saint Sofia herself presides on a giant pedestal in the very heart of town, overlooking all that goes on beneath her – mainly car horns and ambulance sirens! 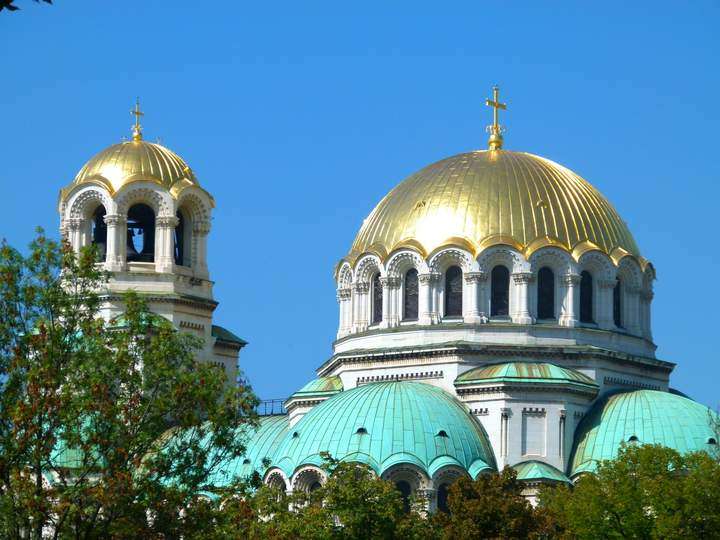 Oborishte, the main thoroughfare from the heart of the city to our place runs right through the heart of the embassy district. The street itself is quite narrow and enveloped in thick tree foliage. About halfway along, just before you reach the canal, is a great little bar with an outside terrace called “The Flip-Flop Bar”. With none of the regular mass-produced beers to be seen, we happily discovered it only had craft beers – and it was on our way home!! This was to be the way of things every night for the rest of our stay in Sophia. 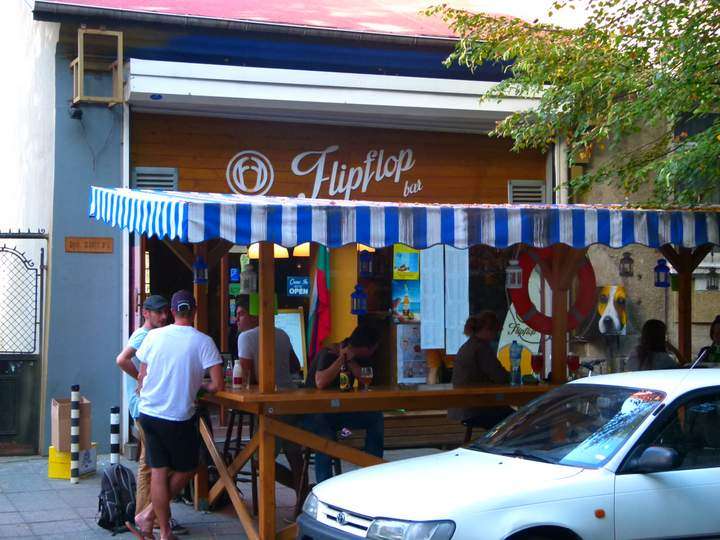 Our local hangout, the Flip Flop bar. Craft beer only!

Another amazing experience in Sofia is the free food tour with Balkan Bites. It takes about 3 hours and you visit 5 or 6 places to sample traditional style food as the guide explains the significance of it to Bulgarian people. Natural yogurt featured strongly, as did vegetarian food. I got the impression that the veggie fare might feature more heavily on her uni student diet than the average Joe Blow Bulgarian’s. However, the tour is loaded with lots of local cultural tidbits that you wouldn’t otherwise find out in a short visit to the capital, and for the fabulous price of FREE, you can’t argue with the value! 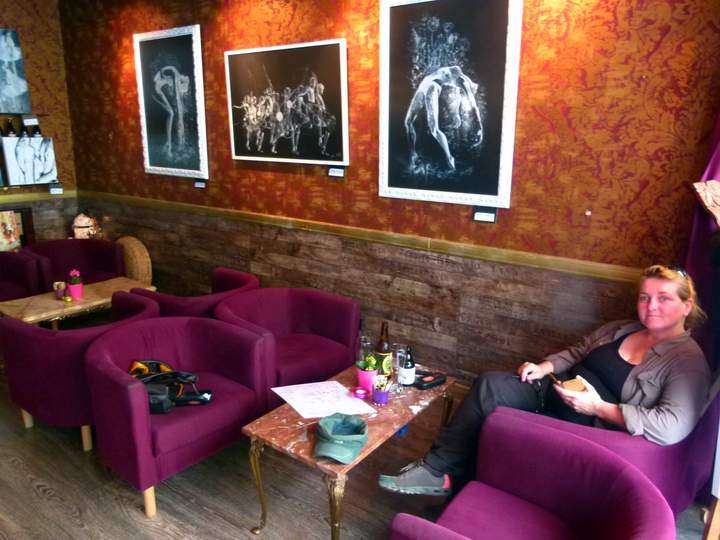 Sofia is the kind of place you can just wander about and soak up the atmosphere – in summer & autumn at least. The population is young and vibrant, the architecture incredible and there are plenty of trendy cafes, to relax and watch the world go by. We walked for miles each day to discover various sites and monuments. Most of the city is flat and the thoroughfares easy to navigate. Food is cheap and so is the beer. We couldn’t ask for more than that. 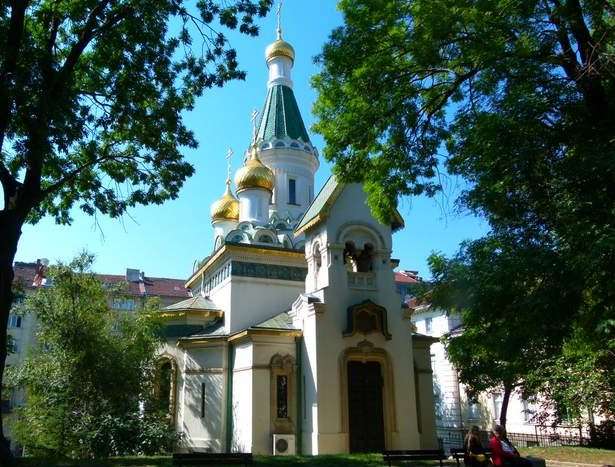 Sofia is the furthermost south we would go on this trip. It was now time to head north to Belgrade in Serbia. Getting bikes on a bus was an absolute “NO GO!” so we had settled for an overnight train and successfully bought tickets for ourselves and our bikes. We had also talked to the conductor the night before about putting the bikes on the train and there didn’t appear to be a problem. We felt like we’d covered all bases but if there was one thing this trip had taught us, was not too be too cocky when it came to bikes and public transport. We would have to wait to see if the Bulgarian train authorities had the heart to stop us taking the girls on board with us…..

Note: This post is now available as a GPS Guided Travel App. Get the most out of your visit to Sophia and DOWNLOAD it for free HERE.