The Last of our Baltic States. Cycle Touring in Lithuania. 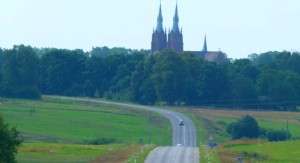 Heading into Salantai on the 169

After a hearty breakfast, whipped up by the enthusiastic landlady, we headed south out of the sleepy little village of Skuodas on the 169.

Around 13km out, we bypassed the historical village of Mosedis. Because we’d pulled up short the day before, we had given ourselves extra kilometers to ride and had no tie to waste.  We turned right at Salentai onto the 226 and pulled in to have something to eat. It’s a tiny place on top of the hill, with no accommodation options (we were told.)

It’s a rolling, green ride through the hills down to Kulupenai, with lots of historical places and elaborate roadside shrines. Just outside of the town, we turned right onto the smaller, but more direct, 2303. It’s ”Gun-Barrel-straight” all the way to Kretinga (about 20km), but much quieter. We were due a bit of respite from the crazy traffic. 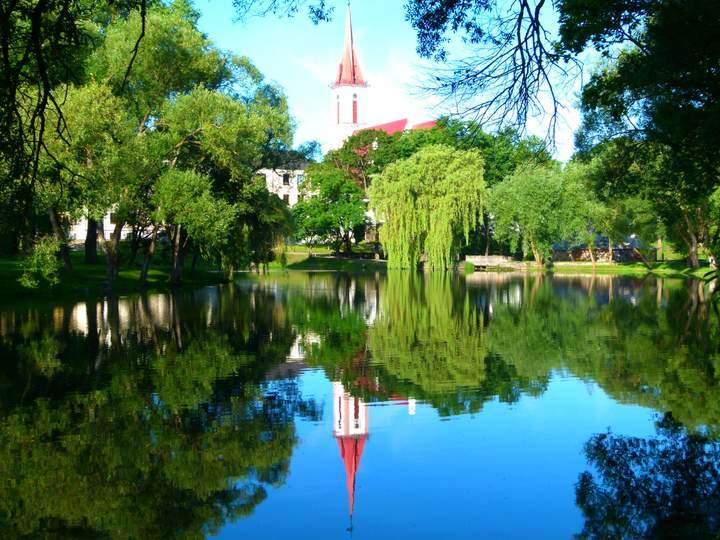 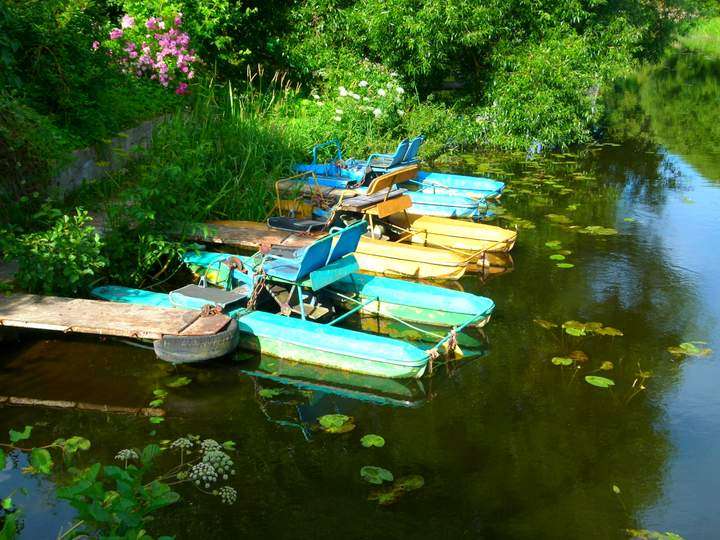 Down by the river in Kretinga

By staying in Kretinga, we employed the same strategy as in Grobina in Latvia. We could leave the bikes securely locked up, avoid the busy, heavily trafficked coast road and not have to ride in the predicted bad weather. Klaipeda is connected by bus and train. It just depends on where you are staying as to which is the most convenient. We stayed a little out of the main city at Smagratis. It was relatively cheap, had a supermarket just down the road, a popular bar and restaurant downstairs and were happy to lock our bikes in their secure garage. 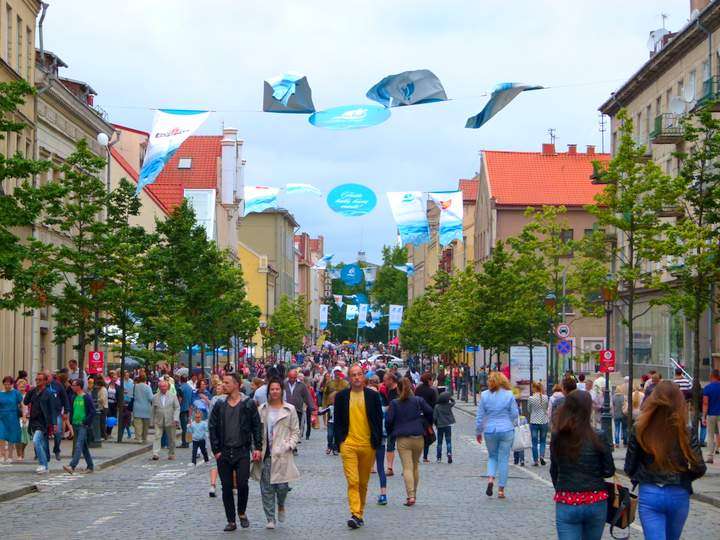 Enjoying the Sea festival in Klaipeda

Kretinga is also linked to Vilnius, the capital of Lithuania, by the train. We needed to wind up our time in the Shengen countries pretty soon as our days were ticking over. Definitely one of the drawbacks to being Aussies in Europe. We are allowed only 90 days in every 180 days in the countries that participate in the Shengen visa agreement. If we rode all the way to Vilnius from the coast, it would limit our available time to organize onward visas for Belarus and Ukraine.

Timing wise, we had lucked out again. Our visit to Klaipeda coincided with their annual Sea festival, a three-day celebration of their relationship with the sea that began back in 1934.The city center was closed to traffic and filled with an assortment of food stalls, beer tents, art and craft markets and all kinds of entertainment. There was lots of colour, traditional costumes, dancing, singing, music and food. There was even an orienteering race around its cobbled streets. A brief, but heavy, shower couldn’t dampen the locals enthusiasm as they scampered for cover and everyone was soon back out filling the streets as soon as it stopped. 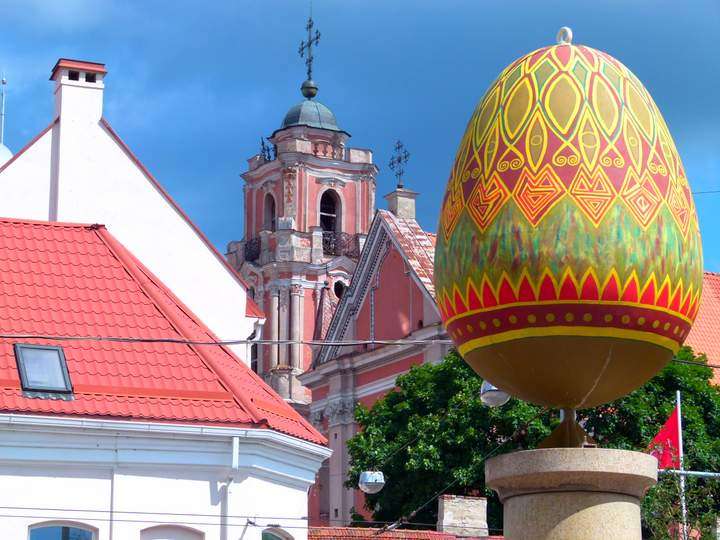 Colour and culture in Vilnius

From Kretinga, we put our bikes on the train to Vilnius. There was absolutely NO problem in just unloading the panniers and wheeling them into the special area for bikes. In fact, the lady at the ticket counter insisted it was “normal!” We did, however, have to pay for them. It equates to 50% of an adult ticket. So essentially we paid for 3 people instead of 2. Considering the time  we were going to save it was a bargain. 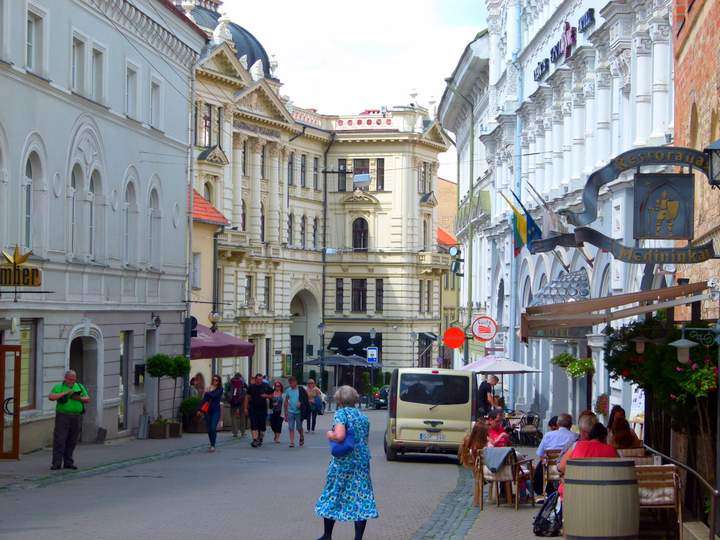 Most of the (approximately) 3hr journey was through green fields, interrupted by the occasional town where we would pick up and let off passengers. Vilnius is quite small and we were quickly through the outer suburbs and into the city centre. The main railway station is perched on top of the hill to the South of the old city, allowing easy access to it. We walked back through the main hall of the station and out onto the busy streets. 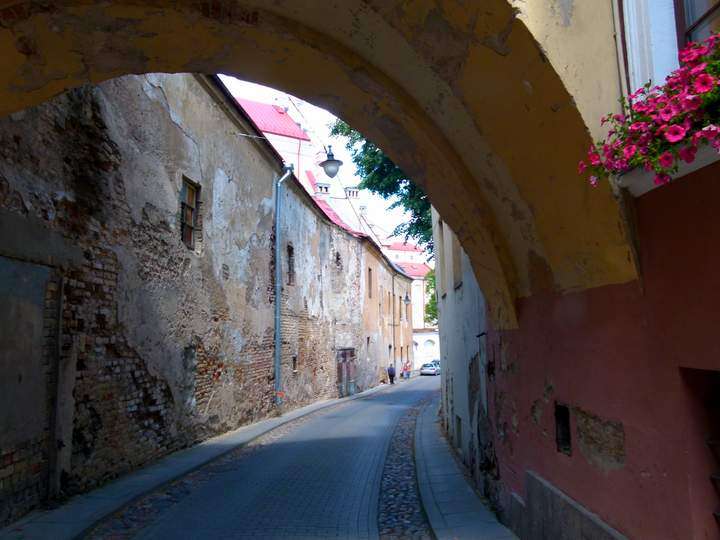 Little lanes to explore in Vilnius

I (Tim) had memorized the map on Google and devised a route that would take us through the old city, avoiding most of the main streets. The plan came unstuck however when a bike path we were on turned into a steep set of steps descending a large hill overlooking the city. The view was great, but there was no way we could ride our bikes down that many steps!!

We turned around and headed down through the narrow streets. Fortunately, they’re not too hard navigate and we found ourselves back on track and down beside a stream at the entrance to “The Republic of Uzupis”. This is one of the most interesting areas of the city and we returned many times of the following weeks to explore its secrets. Somewhere along the line, the residents had (tongue in cheek) declared their independence from Lithuania. They even had a constitution that is translated into a dozen or more different languages. The whole area is full of art, trendy cafes, renovations and a couple of the best pubs in town. 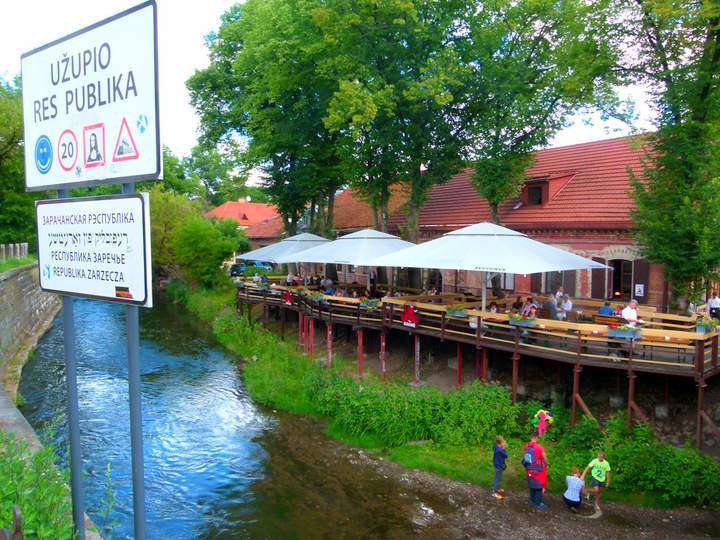 We had a break by the stream, while chatting to a young Aussie couple on holidays in the Baltics. They were quite impressed by our journey so far, but couldn’t see themselves taking up bicycles to get everywhere. (No! It’s certainly not for everyone!)

After one wrong turn, we didn’t take too long to get up to Zirmunai, where our Airbnb room was.  The only problem was that, once again, Google Maps have pinpointed the wrong building. It took us another 20 minutes with sketchy directions to finally find it. Thankfully, being on the  8th floor, it had an elevator. Our host was quite amused by our routine of unloading and moving the bikes but it’s second nature to us now no matter how awkward it seems!

(**Note: If you haven’t already joined Airbnb, sign up for FREE through THIS LINK and we’ll give you the equivalent of 28 AUD towards your first booking) 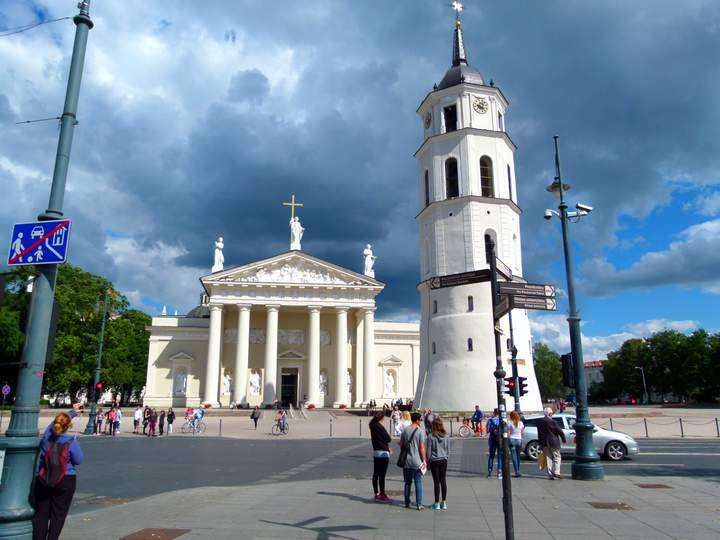 The Cathedral in Old Town Vilnius

The city of Vilnius isLithuania’s top drawcard. The baroque, medieval Old Town is the center of all the attention. As planned, we found it easy to take the trolley bus from Zirmunai into the center where we would spend the day exploring this UNESCO World Heritage City. As in Tallinn and Riga, there’s a plethora of restaurants cafes and bars. And, open areas full of umbrella-covered terraces where you can sit and people watch with a drink at your leisure. The weather was treating us kindly for once and the sun complimented the place beautifully.

Handy Hint: The transport system in Vilnius is excellent. You can buy multi-day transport cards from any Kiosk and use stops.lt to link up the various modes of transport to any part of the city. 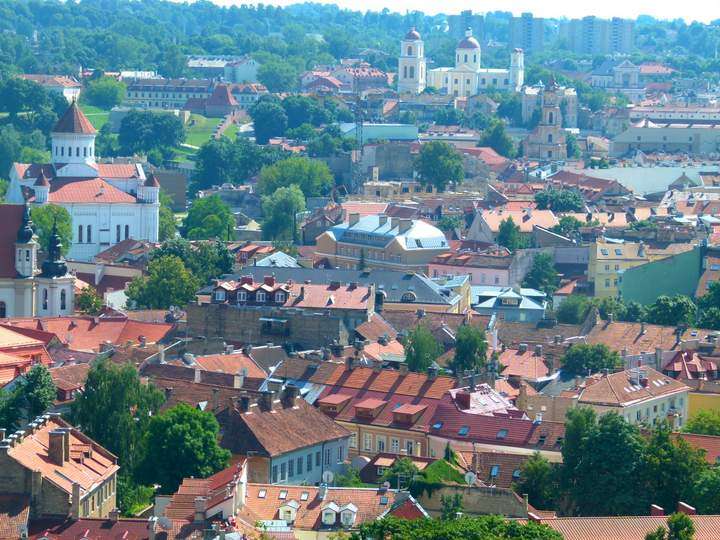 Looking over the Old Town – Vilnius

Our first few days were more concerned with getting our visas for Belarus and Ukraine. This, however, became a sticking point when the Ukraine visa would either take 15 working days or cost us $240 each to express. After much deliberation, we decided to skip Ukraine, leave the bikes in Vilnius, and head to Minsk in Belarus for a week without them. The Belarus visa was fairly straight forward., once you knew how. (See HERE for how we did it and suggestions on how to do it easier)

We’d decided some time ago, that every effort would be made to remain on the bikes during this trip. But ultimately, it’s all about the journey, not about the bikes themselves. They’re a fantastic way to travel but, at the end of the day they’re means to an end. We discovered all the touring cyclists have their own way of doing things and their own set of goals and expectations. We’re no different. So, sometimes, to achieve our goals on the trip, our way isn’t always the highway! 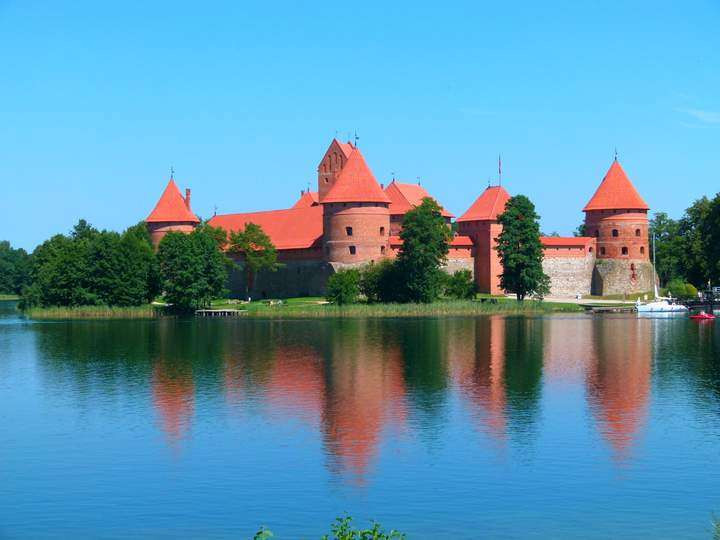 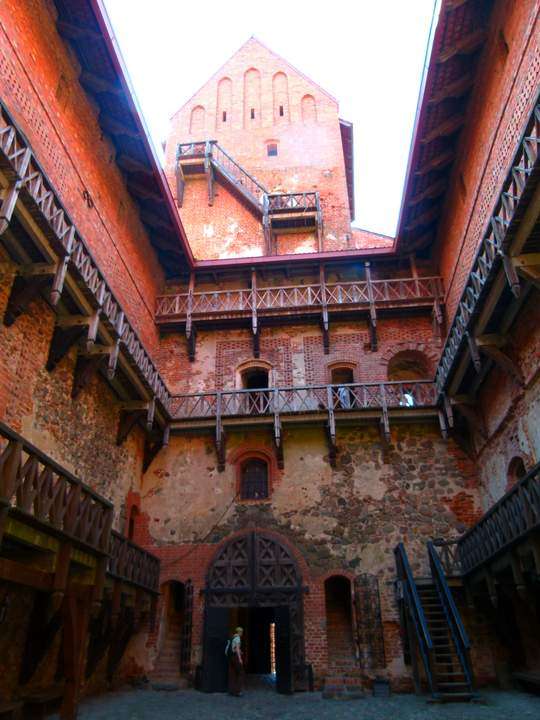 So, with our Belarus visas in progress and our plane tickets to Moldova sorted, we spent 10 days absorbing Vilnius. We did a day trip on the public bus out to Trakai Castle which is definitely worth a look. We did quite a bit of cycling around the city, familiarized ourselves with our local suburb.

Handy Hint: Cycling around the city on Sunday morning is fabulous for getting lots of pictures without the hordes. The usual crowds don’t pick up till lunchtime. 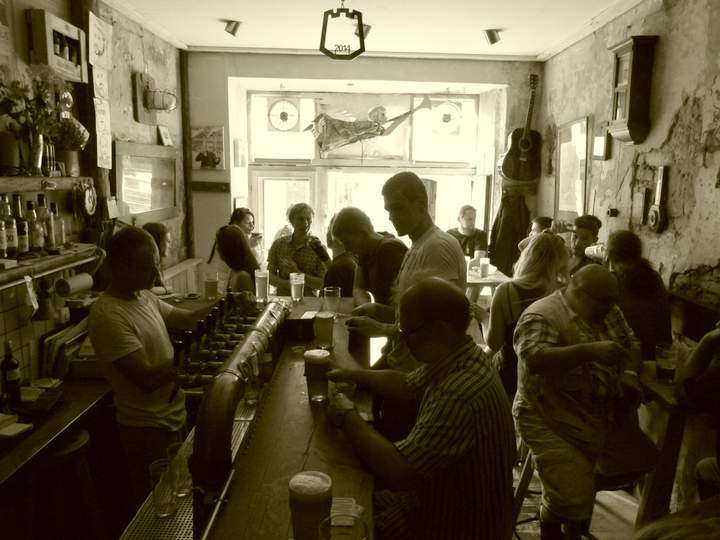 Inside our favourite pub in Vilnius (actually the Republic of Uzupis!)

Oh, and another Handy Hint: We also discovered a fantastic the little pub in Uzepis. Spunka, only sells craft beer! you’ll find none of the mass-produced stuff here.  It’s small, quite hard to find and is obviously a favourite with the locals, which is always a good sign. Prices are cheap, the bar food authentically rustic, and the bar staff obviously enjoy their job which creates a great atmosphere.

For us, Vilnius rates up there as one of the highlights of the trip so far and is now one of the favorite cities. Definitely somewhere we’d return again sometime. If you’ve been