The Big Challenge – Cycling across the Nullarbor (Part 2) 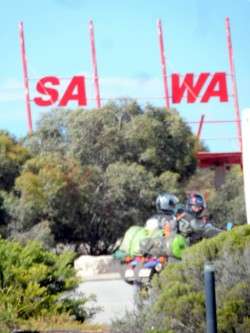 With the first part of the Nullarbor cycle under our belts, the second part was about to begin. The day off in Eucla certainly did the trick but it didn’t improve the weather forecast…depending on which one you looked at!!!! The official BOM site was predicting 39 degrees, possible thunderstorms and nasty winds. Weatherzone.com, on the other hand was reporting temperatures in the mid 20’s, cloud cover and the wind turning in our favour mid-morning. No prizes for which one we were hoping for!

With the worst case scenario being an early bush camp in extreme temperatures because the wind prevented us from getting as far as we wanted to, water was going to be our major concern. The blog we’d read told us there was a water tank at the 50km peg (from Border Village) and then again at the 140km peg, we were hoping we wouldn’t need to fill our 6L waterbags. Instead we filled all our available water bottles which came to around 8L of water each. Worst case scenario would be hailing down a caravan and asking for help. 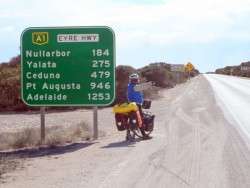 Reminder of the trip ahead

In the end  we needn’t have worried. It was hot but more high twenties father than thirties as the cloud cover did eventuate. Thunderstorms appeared on the horizon but never got near enough to worry us. A couple we’d met in the campground at Eucla were the first to pull over and fill our first bottle with cold water and both tanks were fully functional with cold, clear water. Warning signs told you to drink at your own risk but we carry water purification tablets, readily available at pharmacies in Australia, so that posed no issue for us. The first 60km’s were tough in cross winds but then the wind turned as predicted by weather zone and we did the next 110with lovely tailwinds, making it to a nice parking area at the 157km peg with the same amount of water we had set off with that morning. We’d set ourselves a new long distance cycling record of 170km…13km to Border village and then 157 on the South Australian side.

The descent from Eucla was nice for the beginning of the ride and we pulled up at a couple of the amazing view points along the way. After that things got a little boring. You don’t visit the Nullarbor Road for exceptional scenery although the sunsets can be pretty awesome. And as we settled into the campsite, the wind dropped off and we had an amazing full moon. We’d been warned about dingos and wild dogs in the area, so carefully stowed away food. We’d had cup-a soup and Vitawheats for dinner, not feeling that hungry amazingly and a bit too tired to cook anything more substantial. I realized we’d cycled 170 km on a Mrs Macs pie, a couple of muesli bars and a handful of trail mix. Surely the kilos must be melting off. 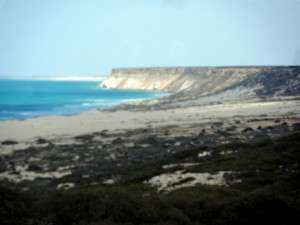 Views of the Coastline 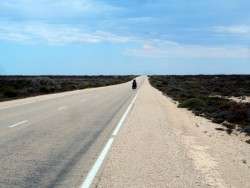 Treeless Plain on the Nullarbor

We were very happy we’d gone the extra distance the next day as the hot, gusty wind made the next 29km to the Nullabor Roadhouse a real chore. Once there we had no intention of venturing out again. We tucked into a truckies breakfastand then Tim went out to scope the camping possibilities. A rock hard dust bowl with no shade…hmmm. The only real option was to hire the “backpackers” accommodation for $60 and wait it out. The forecast was for better conditions the next day. The accommodation was a container out the back with a reasonably comfy bed, no electricity and a 200m walk to the loos.

Sure enough weatherzone.com came through again for us. We headed out into the treeless plain with very little wind at all. By the time we’d decided to go all the way to Nundroo (145km), we had a hooting tailwind, forcing us to break hard to actually pull into the roadhouse. Once again the camp site was crap so we upgraded to a room at $90 and dinner in the restaurant. All our food packages had been where we’d had them delivered but we were covering way more distance than we ever imagined and eating at the roadhouses rather than cooking for ourselves. I’d sent some food ahead to our Korean friend, knowing he was running low on food and cash and ended up handing off whole packets of biscuits to rather surprised tourists in the campground. Nothing like being over prepared. 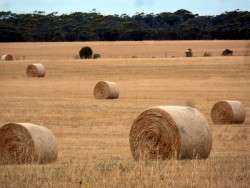 Back in Civilisation – Farmland near Penong

Our ride to Penong the next day was one of those character building ones. Only 78km, we managed to get wet and then dry off 7 times over the course of the day. The wind was atrocious and we were very aware that the harvest season had started with a huge increase in truck traffic. The views had changed from flat plains and scrubby mallee to farmland. Wheat and canola as far as the eye could see.

As we rolled into Penong we were still wet from the latest soaking. The lovely lady at the caravan park had an on-site van for $60 which included a kitchen and a heater. We wandered over the pub, grabbed a few take-aways and holed up in the van with the TV and heater on while the weather howled around us. When I looked at the news I understood how lucky we’d been. Whole houses had been blown away on the Eyre Peninsula. No wonder they’d been a bit of wind on our ride. 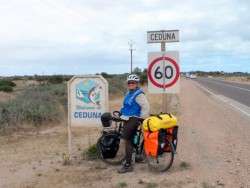 Arriving in Ceduna, South Australia, The end of the Nullarbor

The ride into Ceduna the next day was shorter again at 73km but no less frustrating with cross-winds and dozens of very large trucks. We were even more cautious, if that was possible, with our goal of cycling across the Nullarbor almost achieved. It was an amazing feeling as we rolled into town. We had cycled over 1200 km in only 13 days and that included a rest day. We’d triumphed over the weather and the harsh climate and actually felt pretty damn OK considering. Because we’d had the weather forecasts we’d cycled hard when the winds were good which had allowed us a bit of respite when the weather had turned foul.

We pulled up in front of the tourist information and were immediately accosted by some over awed caravanners who proceeded to plump up our already pretty big sense of worth and pride in our achievements. They’d seen us on the road a couple of times and couldn’t believe we’d actually rolled into town before them. A couple of other travellers came by and joined in the conversation until we had to make our excuses to extract ourselves and go and find somewhere to sleep.

The Foreshore caravan park was our first stop and they had $85 budget ensuite cabins on offer. Despite the fact they had lovely grassed sites and a great camp kitchen we treated ourselves to the cabin for three nights. 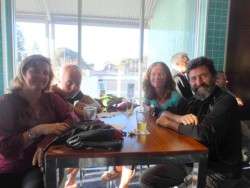 We had couple of days rests, some great home cooked meals (the cabins had a little kitchen), a few brag conversations to relatives and friends, a bit of maintenance on the bikes and a few sociable drinks with another cycling couple from the Netherlands who had come in two days after us. We were having coffee in the main street when we saw them roll in. People had been telling us they were behind us so we immediately went over to congratulate them. They were over the moon. They’d been imagining what it would be like to have family and friends to welcome them in and then suddenly there was a couple of crazy Aussies doing exactly that. It was great to share some tails on the road and realize that even very experienced cyclists like Jelle and Carla had the same issues we had been experiencing.

Still we had a long way to go. The job of cycling across Australia wasn’t finished yet. the next leg of the journey to Pt Augusta would take us to our first contact with family for a very long time.  That in itself was enough to motivate us to get back on the bikes and keep on peddling.