Over the Hills and Far Away – Cycling from Adelaide to Strathalbyn 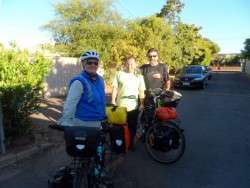 Mark had driven me up this route a couple of days before and left me in no doubt as to how difficult it would be. It’s a steep 10km climb that tested even the more experienced road cyclists with their feather-weight bikes. Yes we’d met a few hills in our ride through the Barossa Valley but this was a whole new ballgame.

After a week off at my brother’s place, Sakura and Radmilla were fully restocked and loaded to the hilt. Portrush Road was its usual busy self with a fair spattering of trucks making their presence felt. After about 7 kms, it was good to get onto the bike path that would lead us up and out of Adelaide. 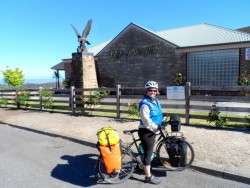 Proof we made it up to Eagle On The Hill

From the very start, the legs began burning as we reacquainted ourselves with the effort of climbing. We were in no hurry and the weather was good, so we took our time and stopped often. We were sharing the path with dozens of other cyclists, all on road bikes and whizzing past us. It was food to see our fellow cyclists calling out encouragement and urging us on, I figured, if they were struggling, they’d appreciate what we were going through!! After about an hour, we finally reached a section so steep that even we couldn’t pedal up. Koala Corner (about 200m below Eagle On The Hill) had our measure and the legs just couldn’t find the strength to push the girls up. We succumbed and walked them for about 100m and got back on. The hill had bested us, but we’d put in a good showing. 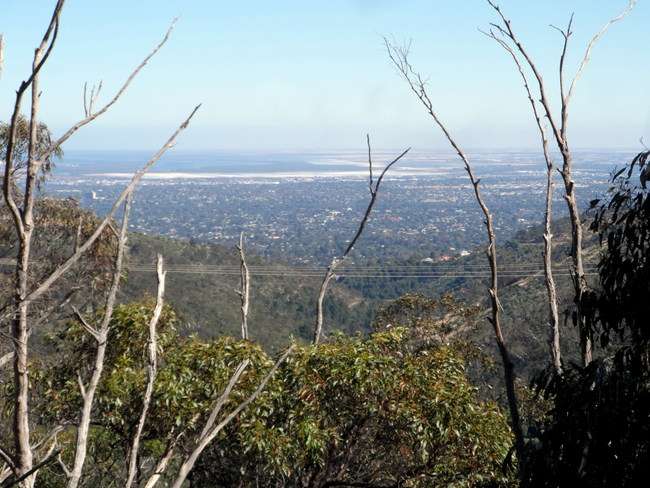 View of Adelaide from Eagle on the Hill

There was one last steep climb up to Crafers (there ALWAYS IS!!!) and then it was Question Time on the top of the hill with several of the other cyclists, including a group of ladies from “women on Wheels” who invited us for coffees at Mylor (another 10kms), but we politely declined – we need coffee now – not later! 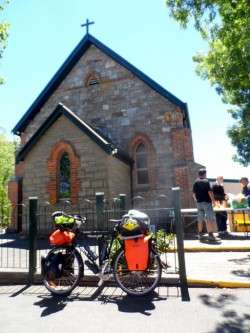 We rolled on down into the picturesque village of Stirling which was heaving with people and bathed in brilliant sunshine. The main street, overhung with giant, shady trees, was where we found a place for coffee but …ALAS…no pies!! We collapsed into the outside chairs and took the weight off our aching, weary legs. Despite the brilliant sunshine, the temperature up here in the hills was noticeably lower. People were still dressed for winter, unsure of the course the weather would take next.

Back on the bikes we rolled downwards through Mylor, Euchunga and Macclesfield. The narrow winding road kept us alert for traffic as it descended quickly then rose up out of each village reminding us that we still had plenty of work to do.

In Euchunga we stopped next to the church for a sausage sizzle that we could smell from down the street. We had a god ol’ gasbag with the locals about our experience and the vagaries of The Nullarbor. In Macclesfield we called into the Three Brothers Hotel (as suggested by my sister-in-law, Michelle) and I couldn’t resist trying an amber ale from Mt Barker’s Prancing Pony Brewery. It was a lovely drop too – and we only had 10kms to go. About the last 8 kms was all downhill into Strathalbyn sitting at the base of the southern side of the Adelaide Hills. 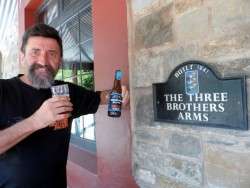 We quickly pitched the tent in the tiny caravan park located next to the oval and tennis courts. A walk around the town centre looking for food revealed a fantastic parkland split by the Angus River and bound at one end by a towering stone cathedral bell tower.

It wasn’t long before we found ourselves in the Victoria Hotel on the edge of the parkland. All the outside seats facing the river were gone, so we moved inside to the front bar. Just as well. After about 10minutes a metre long black snake was keeping the patrons on the footpath alert as it tried unsuccessfully to enter into the cellar via an old ventilation grate. It eventually eluded the local snake catcher and escaped into the cellar anyway. 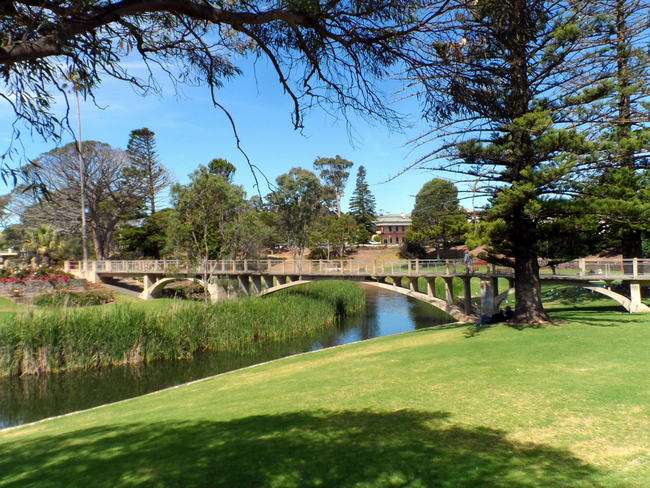 We had come to the pub to meet our mate Scotty who we had travelled with in East Africa on the African Trails truck with Nicola and Suzy. It was a great chance to talk about our time together in Ethiopia, Sudan and Egypt. Scotty is back in Adelaide looking for gainful employment to fund his next adventure across the Silk Route with Suzy and Nic on another African Trails trip. It should be a hoot.

Inevitably we stayed around for quite some time and we knew it would be hard to get up the next morning to cycle into The Coorong. It was worth it though to reminisce about a great time we shared in an exciting part of the world and to tell him about our latest adventure, cycling across Australia. 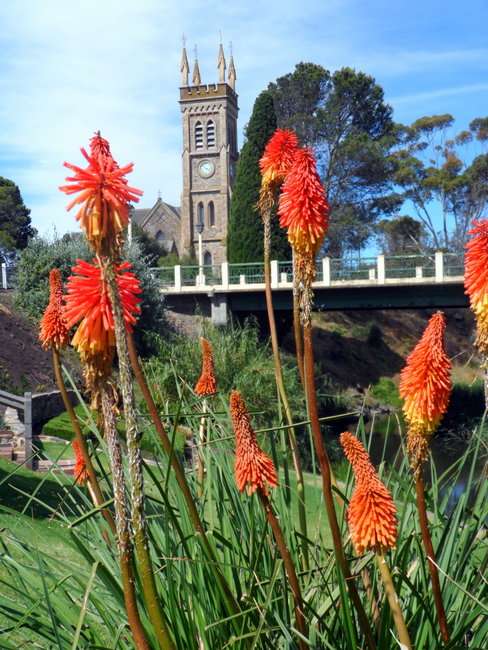