The 12hr train journey from Belgrade to Bar, in Montenegro, averages 10 tunnels an hour. Needless to say, it was quite spectacular (when we had the sky over our heads!). It was also a little nerve-wracking when the “Old Clunker” crossed the seemingly endless, deep valleys over ridiculously high, narrow and spindly rail bridges that always seemed to dip away at an angle.

We were pretty tired by the time we arrived, but the day wasn’t over yet. We then had to reassemble our bikes and wait in the dark out the front of the station at Bar for our Airbnb host to guide us to his home. Everyone else had already left and 20 minutes later, we were still waiting for Zoran to pick us up. There was no way we would find the way ourselves in the dark. Sharyn eventually had to get the wifi code from a small cafe across the road and message him as we didn’t possess a SIM card for our phone yet. 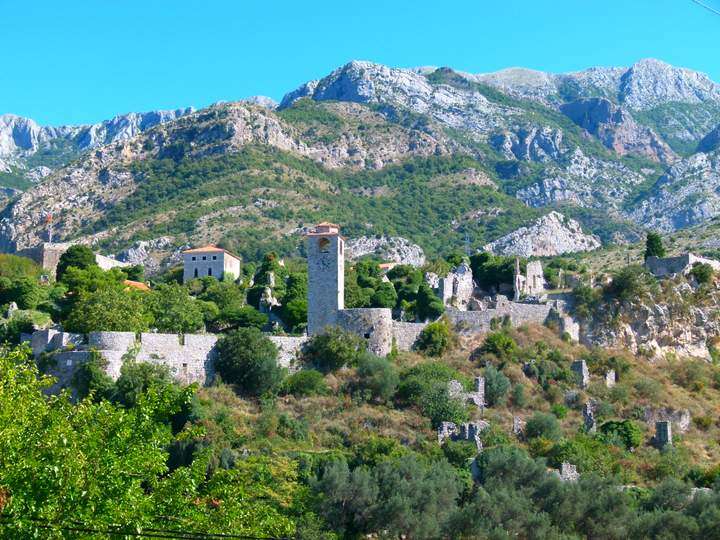 Zoran casually rocked up 15 minutes later and drove in front of us as we followed him back to his house. We lost sight of him a few times as we seemed to reckon he thought we were on motorbikes, not fully loaded bicycles!

Once again, the house was great and had everything we could need, it just wasn’t where Google Maps said it would be – even after being supplied GPS coordinates! Zoran kindly drove me back to a small supermarket to pick up something to eat for a late dinner and a couple of beers to help us sleep!

Despite the shaky start, the house was fantastic and so was our host. Airbnb was proving the perfect solution to our accommodation needs once again. A secure place for the bikes, the whole house to spread out in and a host with great English and lots of local tips.

NOTE: If you haven’t already opened a FREE Airbnb account, use this LINK and we’ll give you up to $40 off your first booking. Once you see the great value available, it’s unlikely you’ll go back to boring old hotels unless you have to. 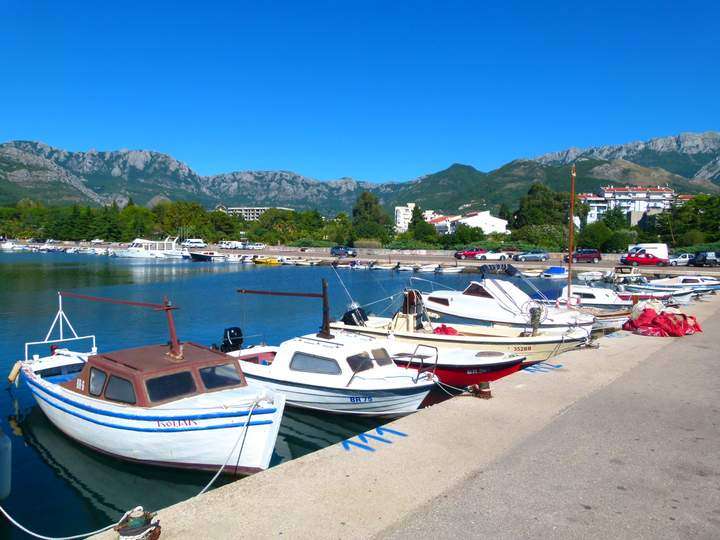 Bar Marina with Montenegro’s stunning mountains in the background.

Bar is Montenegro’s largest seaport, but far from being the usual industrial wasteland, it had a tropical, Mediterranean feel to it. Admittedly, the large seafront esplanade doesn’t contain a beach – not a sandy one at least! But it does have a lot going on with cafes and restaurants enjoying the view over a marina full of epically expensive seacraft of all kinds. The sun was out, the sea was clear and blue and the ruggedly steep mountain scenery made its way all the way down to the sea in the most dramatic fashion. Great, rocky edifices towered over the entire scene, completely dominating the coast. Bar lay at their feet, then climbed up and away from the sea quite sharply. Being 2kms from the water, our house was perched up high over the rest of the city. 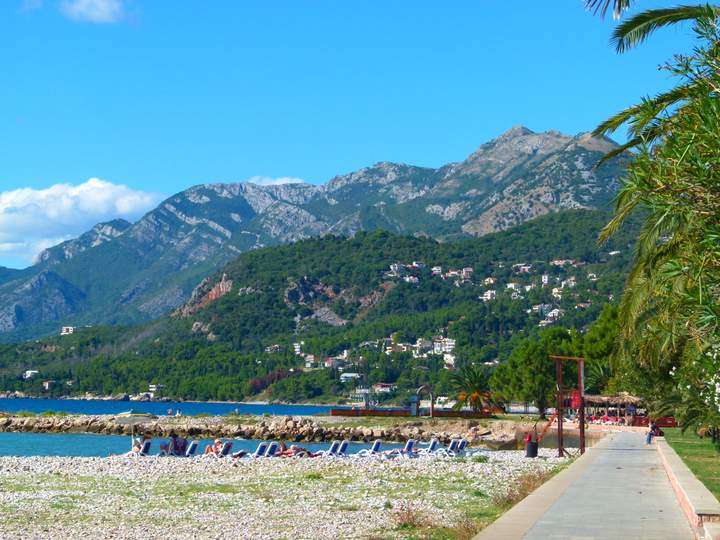 Fortunately, we were halfway between the sea and Stari Bar (Old Bar), which was set upon a small ridge tucked out of sight of the new town (and any potential invaders back in the day). Over the next few days, we would use the steep climb to Stari Bar as a training ground for the rest of our journey north to Split in Croatia along the hilly coastal road. 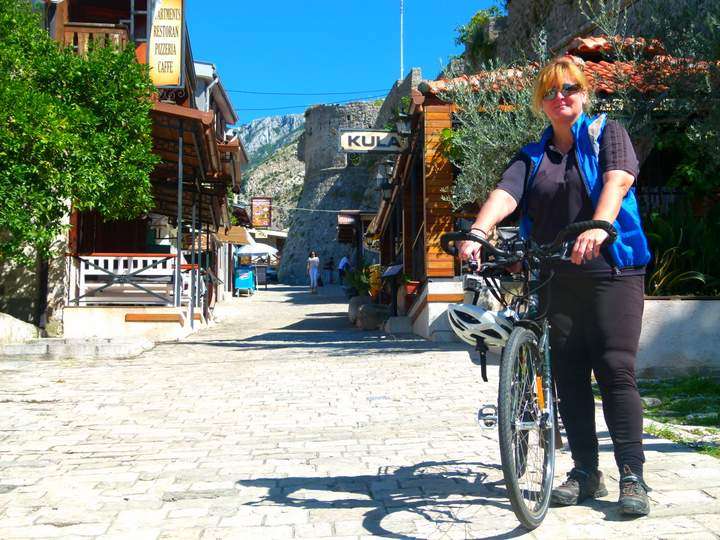 Sharyn outside the walls at Stari Bar after a steep training ride.

The sun on the coast was a welcome stranger and it drew out the tourists onto the beach all day long. Sun worship is a very European thing and we’re beginning to understand why – they rarely see it!

We spent our time each day wisely getting in plenty of ride time on the hills preparing ourselves for the long climbs from Podgorica (the capital) to Kotor just to the north of us.

Having taken the train through Podgorica, our Airbnb host there advised us not to take the mountain road to Cetinje as it was busy, narrow and dangerous. The possibility of rain the next day made us a bit nervous and after some deliberation we got our host to organise a taxi to take us instead. Although we strive to challenge ourselves and the exhilaration of completing a challenge is what it’s all about, at the end of the day the risk needs to be an acceptable one. The prospect of having to walk the bikes a considerable distance along these busy, narrow roads with no shoulder wasn’t enticing at all. We take risks all the time in our travels, but thrillseekers we are not! Once again, from experience, we relied on our gut instincts (something we’ll do every time) and its served us well so far. 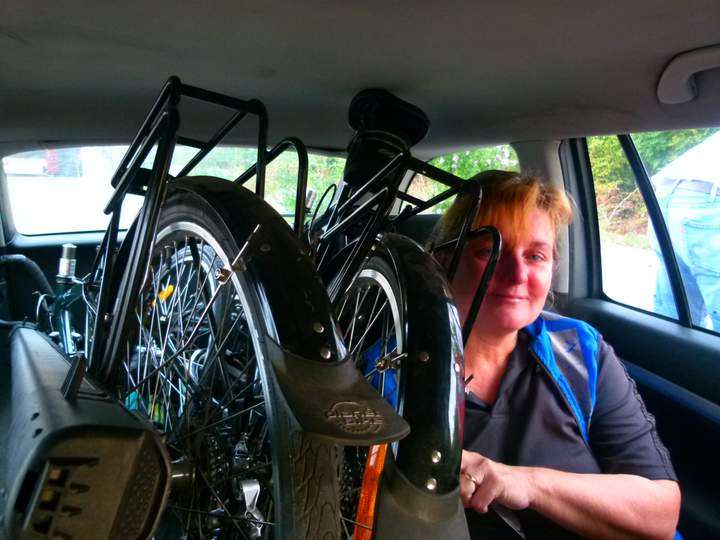 Sharyn, barely cramming in the taxi with the girls!

The next morning the taxi picked us up on time. It was a small station wagon so we needed to strip the bikes down quite a bit to get them, as well as ourselves, in.

Because of the weather forecast (it was meant to be fine in Kotor over the next 2 days), we chose to pass Cetinje and get dropped at the top of Lovcen National Park. What would have taken 2 days ride took us only an hour and a half and suddenly we were assembling the bikes at a roadside restaurant on top of the mountain range more than a kilometre above the Bay of Kotor. 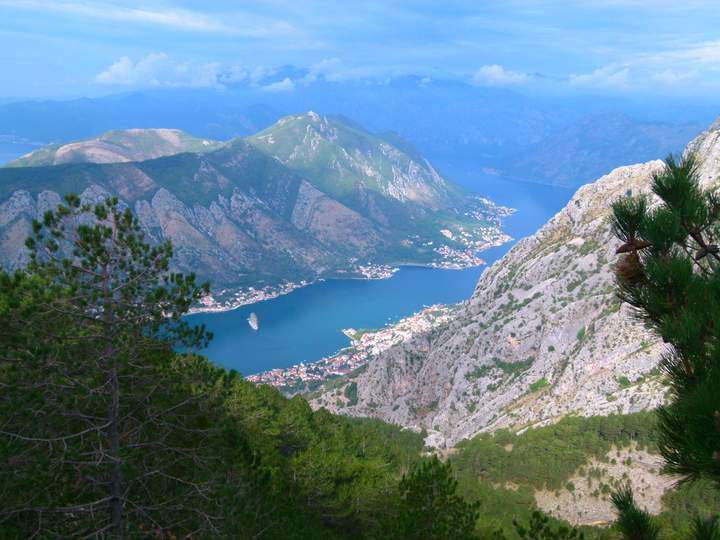 Our first view of the Bay of Kotor from the top of the Serpentines.

We enjoyed a hearty meat soup for breakfast and one by one took a walk out to a nearby viewpoint over the bay while the other minded the bikes. I had been itching to see the Bay of Kotor for nearly a year now. I’d never even heard of it before then, even though it was so close to Dubrovnik. Our American friend Elieza (who we met on the Silk Road in Bukhara, Uzbekistan) had posted some pictures on Facebook and from that moment I knew I had to see it… and now here I was staring out over it in all its glory. A large, white cruise ship was docked in front of the red-tiled roofs of the Old Town in sharp contrast to deep blue bay waters. From my vantage point, it was tiny, people were indiscernible, neither were cars at this distance. It was the Norwegian Fjords all over again – like Mount Everest meets the Med. All along the bay, tiny towns clung to the water’s edge, seemingly being pushed in by the sheer cliffs that dropped from the clouds down to their backdoors. 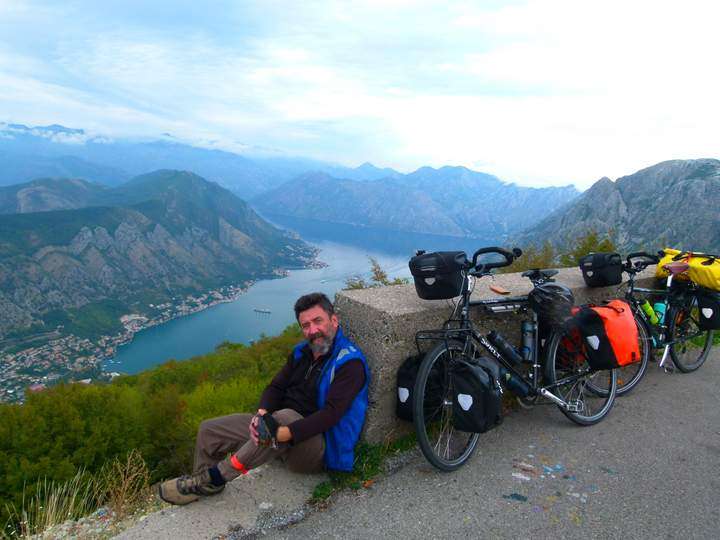 Tim resting before the 20km descent down the Serpentines into Kotor Town.

We could have spent all day there barring one thing – we knew our first fully loaded ride in Montenegro would be over 20kms down a near vertical cliff face – a long series of switchbacks called “The Serpentines” that would take us 2 hours to descend, never once needing to pedal. The ever-changing views of the bay came at every turn, we couldn’t get enough of it. The headrush of the seemingly endless descent was totally exhilarating, the most fun we’ve had on the bikes and certainly a lasting memory.

We eventually bottomed out in front of the main city gate of the Old Town, the view at sea level along the bay was also memorable. 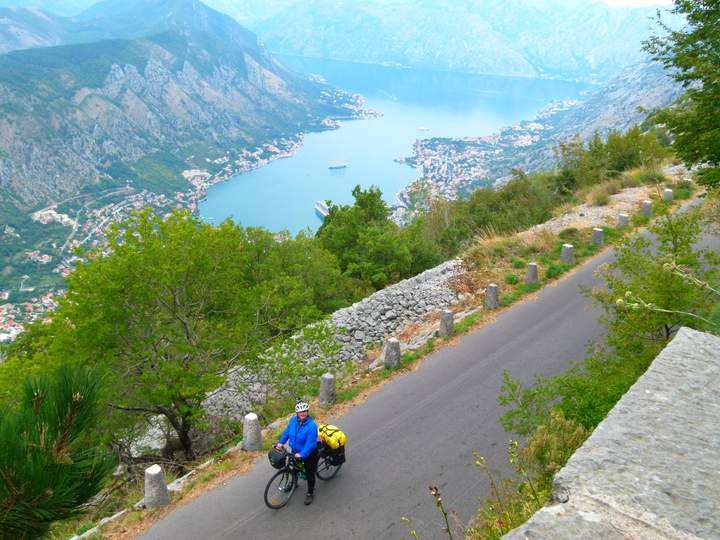 Sharyn making her way carefully down the Serpentines.

The Old Town is fortified, with a city wall that not only blocks entrance from the bay but runs up the steep mountainside directly behind the town to eventually terminate at a castle perched some 500m above the rooftops. It is really something to see as you stand there with your head tilted back completely and the wall disappearing into the clouds like some well-illustrated fairy tale book, and the front gate was blocked with tourists, all doing just that!

We were lucky enough to stay in the very centre of the Old Town in an apartment complete with an ancient stone balcony. (Airbnb again!) The castle of St. John hovered well above our heads but we could trace a section of the ramparts as they climbed their way skyward. 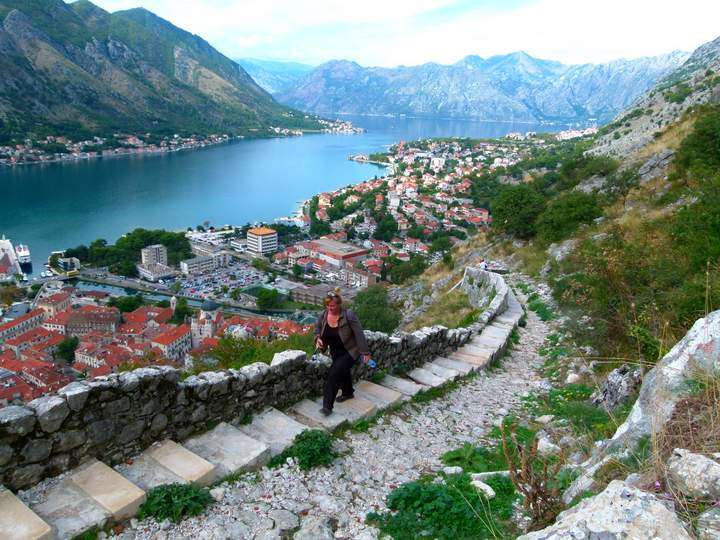 Sharyn climbing the ramparts to the Castle of St. Johns that encircles the town.

Surely enough, after a couple of days, the rain caught up with us again. Kotor is pretty small though and we managed to climb to the castle in brilliant sunshine on the second day.

Rather than sticking around in town we managed to get a dry 4km walk down the bay along the water’s edge. Some of the ancient, restored houses here had us drooling – what a place to spend a month kicking back! We eventually found a small bar of locals jutting out over the water, where we sat back with a few cold ales contemplating life and enjoying the incredible view as the afternoon sun made its way lazily through the sky. 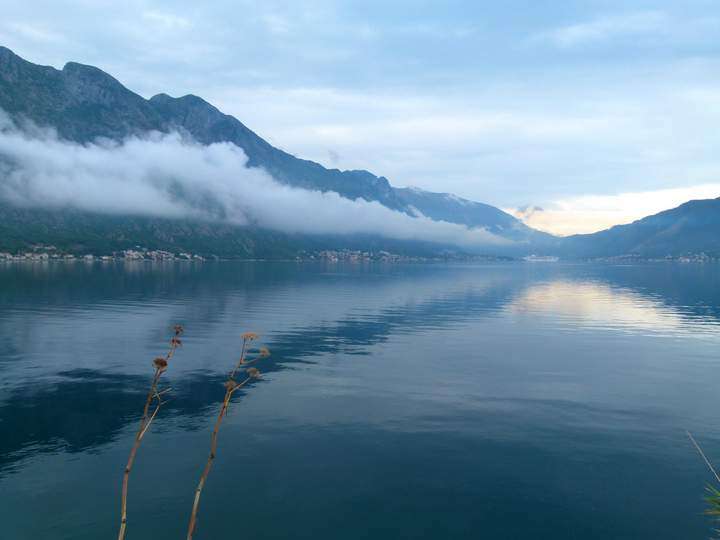 A walk along the water’s edge.

As much as we loved our time in Kotor, we were both looking forward to the incredibly scenic (and incredibly flat) ride around the bay to Herceg Novi. The ride is a 45km meander around the water’s edge taking in not just the scenery, but the small, well-kept village of Perast (Perash) with its 2 small stoney islets a stone’s throw across the water in front of it. Our Lady of the Rock church covers one of the tiny islands and is a drawcard for the many tourists day-tripping from Dubrovnik. 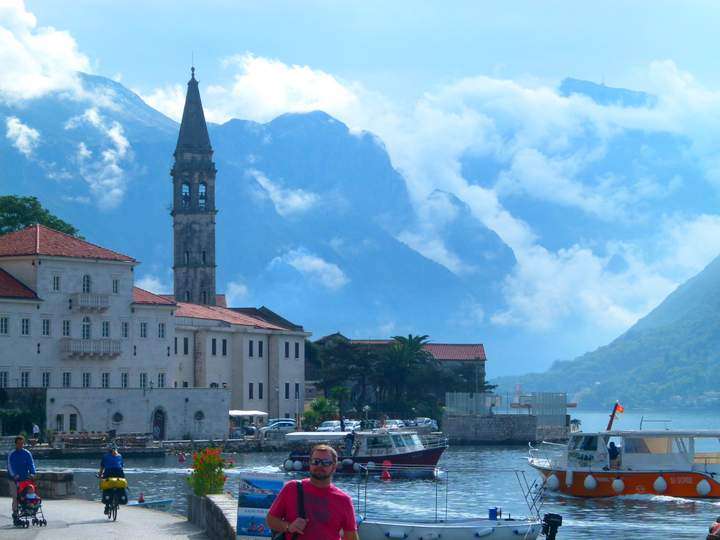 The tiny bayside village of Perast. 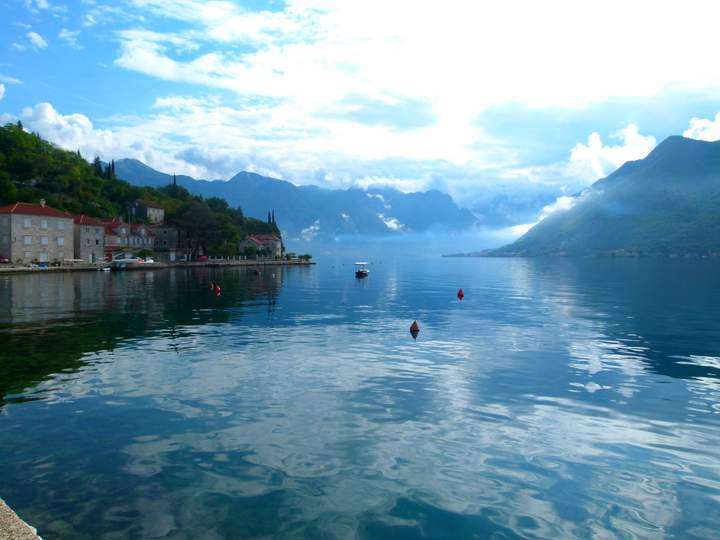 Riding out around the bay. One of the best days of the trip!

The ride around the bay was pretty chilled-out and, once again, spectacular – a cyclist’s dream! 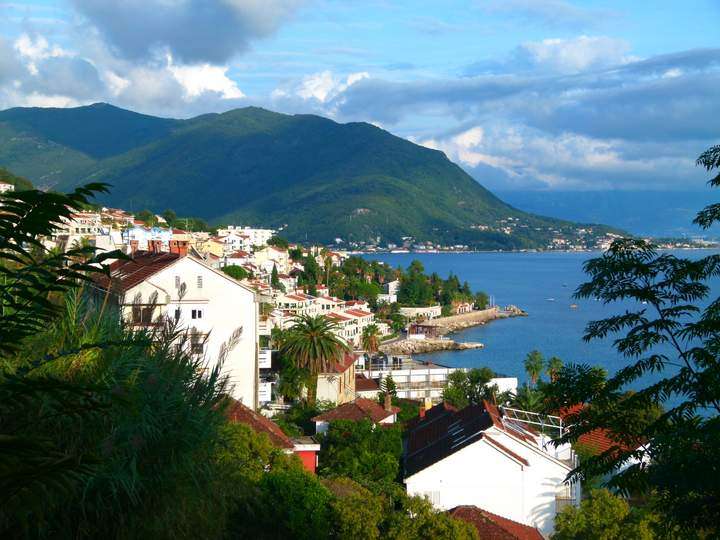 The town of Herceg Novi at the far end of the Bay of Kotor.

We spent 4 days in Herceg Novi. It’s quite nice and well situated, but we were essentially waiting out the rain to tackle our most difficult and dangerous ride yet – the coastal mountain road to Dubrovnik, once again, a narrow, very busy, shoulderless stretch with long, sharp inclines. I spent quite a bit of time sussing out alternative roads but there weren’t oo many options. It was going to be a long, hard, dangerous slog and we would just have to hope the bicycle gods were with us….

Have you been to Montenegro? It’s now one of our favourite countries and one we’d love to return to for a longer stay. Where else should we have visited? Let us know in the comments below.