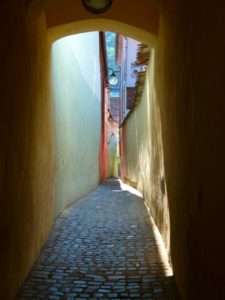 The central bus station in Brasov is small and crammed next to the train station. There’s not much room in between buses which makes it challenging to retrieve large items. (like touring bicycles and large Chinese shopping bags full of panniers!) The task is even more difficult due to the constant wave of people squeezing through every possible gap.  We had to ferry each item through the crowd while trying to keep an eye on either end.  Thankfully nothing went missing during the operation. Despite this slight inconvenience were more than happy we hadn’t ridden the steep, winding and busy road.

There are bike racks opposite the buses where you can chain your bikes and a restaurant close by where you can watch out for them. We settled in until our Airbnb host Julian arrived to guide us home.

To make life easier, and the trip home faster, we packed all our gear in the car. There was minimal traffic on the 4.5 kilometers to the unit, and drivers were quite considerate, so we were at our destination in no time at all. Once again we lucked out. We were smack bang in the middle of the old fortified town; we’d heard so much about. 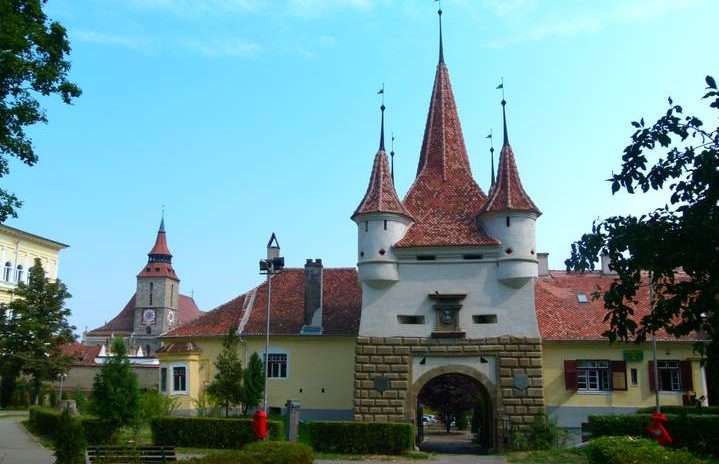 Brasov sits in the southern Carpathians at the foot of Mount Tampa in the famous Transylvania region. Apart from its attractive, well kept Old Town, Brasov is a hub for hikers and mountain bikers, neither of which we had planned!! People also flock to the region to ski in the winter, which wasn’t too far away. There was already a nip in the air.

Brasov’s other claims to fame include links to the Pied Piper legend and one of the biggest beer festivals in Europe. Much to Tim’s delight the festival would be on while we were in town. In fact, it happened right across the lane from our room! The ringing in my ears still hasn’t stopped!! 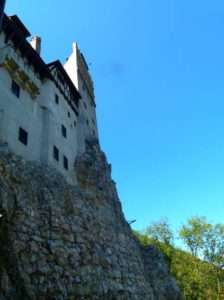 No trip to Romania is complete without a visit to Bran Castle.

Popular tours from Brasov include the legendary Bran Castle, which inspired the Dracula story and driving or cycling the Transfagarasan Highway. Try saying that after a couple of beers!  The crazy steep and winding road was made famous by Top Gear program!!

In the middle of the Old Town, adjacent to the main Square (Piata Sfatului) stands the grand gothic basilica Neagra (black church), the largest church between Vienna and Istanbul and still in use today by German Lutherans. The old town was reminiscent of Tallinn. Its streets are cobbled and in excellent condition. Well-preserved architecture surrounds the traditional central square and attracts hordes of tourists!! There are hundreds of cafes and restaurants and outside terraces line the side streets around the plaza.

Most visitors to Brasov will include a visit to Bran Castle, around 35 kilometers away. We elected to use public transport to avoid the relatively expensive commercialized tours. Epic fail! It’s easy enough to catch a bus to the center of town, but there’s no way to avoid the crowds. Every nook and cranny of the tiny village echoed with the sound of hundreds of shutters clicking and flashes popping.

It’s a lovely setting, and it’s not hard to see why Bram Stoker would embellish his stories with such a place. But while the castle is very nice, its just not set up to handle ten busloads of trigger-happy tourists intent on breaking loose from their restraints and creating mayhem all at once! 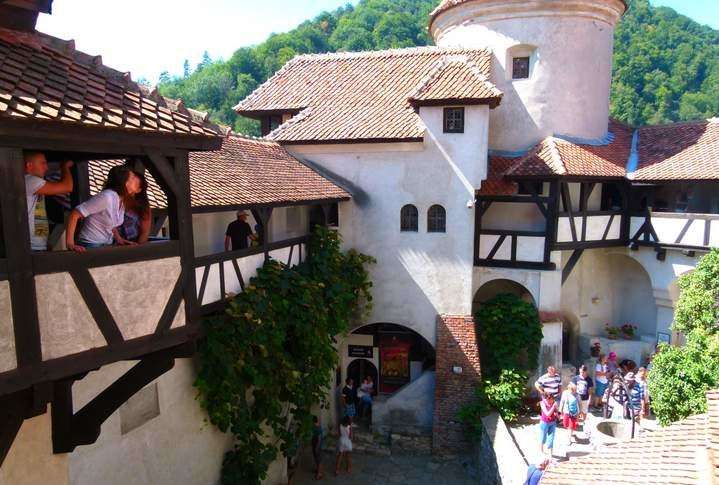 No shortage of tourists to jump in your shot.

Anxious to be out of the crowd, we adopted “turbo tourism” tactics ourselves. We toured the exhibits, trawled the many souvenir stalls for Vampire teeth, ate at a small restaurant, had a quick look at the rest of the village and boarded the bus home within two hours.  Whew! 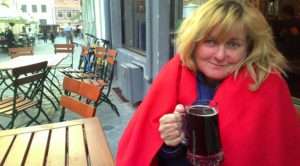 Blankets included on the outside terrace – Tipografica Bar and Cafe

We’d not been traumatized like that for some time and needed some something stronger than coffee to recover. When we returned to the old town, we scouted around and found what would become ‘our’ watering hole for the remainder of our visit.- Tipografia is a cafe bar owned by Vali, a friend of our hosts, Julian, and Raluca. Along with seats outside perfect for people watching, it sold a rarity in Romania: craft beer. It was a good drop too!!. Zaganu make a blonde and a brun. Both light and dark pilseners beg to be drunk. Take care, though. They’re both 5.3% alcohol 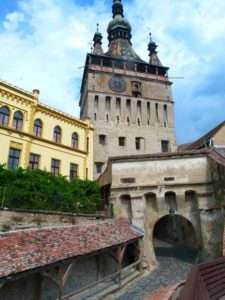 We reflected on over our options for visiting Sighisoara, the birthplace of Vlad Dracul (Vlad the Impaler), the main protagonist in the Dracula legend. After considering road conditions, time constraints, and route options, we opted for another day trip. This time on the train. It was a long day to get there and back in one day but what visit to Transylvania would be complete without seeing where baby Dracula got so big! In hindsight, the train proved a better option than cycling out there as part of our trip. The scenery was a pretty uninspiring!

Sighisoara is quite the opposite. It’s built around, and atop, a hill on one side of the Tarnova River.  The small, but well preserved medieval town is still fully fortified and is UNESCO Heritage listed. A 64 meter a high clock tower dominates the steeply sloping streets and houses an interesting Museum. Vlad’s birthplace contains a small Museum as well as a restaurant. It had a long line up of tourists waiting to see the room where he was born. With black clouds threatening, we gave it a miss! 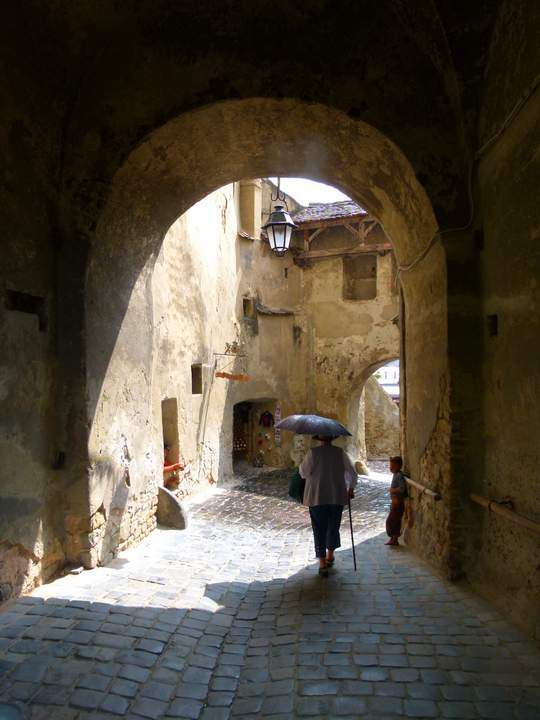 Most of the buildings inside the walls are now accommodation and eating places. You can climb the numerous wooden steps to see Romania’s first school which is quite interesting. Further along is an atmospheric graveyard containing many of the townsfolk from down through the ages. We spend a few hours there and made it back to the train just as the heavens opened. 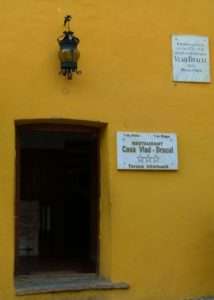 On inquiring about transport to the Transfagarasan Highway, we found that it was something of a logistical nightmare to visit independently from both Brasov and Bucharest. Tours were well outside our budget, starting at around 100 USD each for the day. Julian, our host, offered to drive us out and back as a day trip for a minimal fee! Done deal. Yay Airbnb. That’s why we love you. We had really wanted to get out there and see the massive feat of engineering, about 75 kilometers out of Brasov. It’s the second-highest paved road in Romania and stretches for 90  kilometers of vertigo-inducing switchbacks that twist between the two highest peaks in the Carpathians. Moldoveanu and Negoiu. 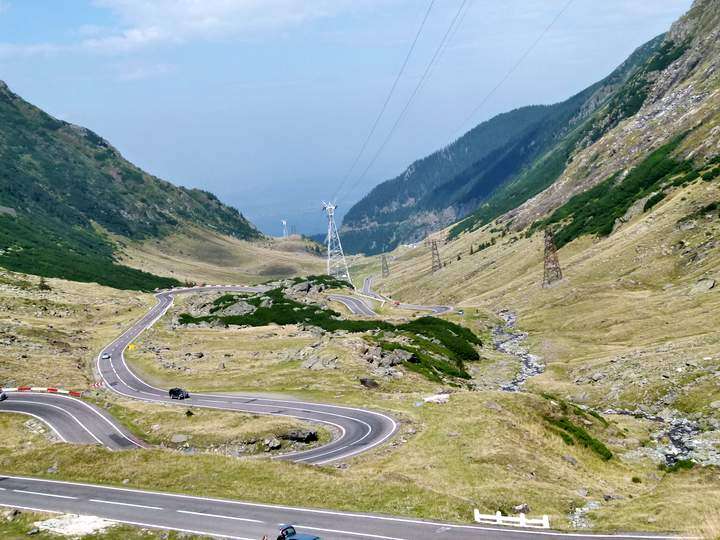 The first 70 kilometers is as flat as a tabletop, but once you turn off the main road, you begin one of the most spectacular ascents of a mountain in Europe you can still do by car or bus.  We counted several guys doing it on road bikes and a  few hearty souls on fully loaded touring bikes; a challenge well out of our grasp I’m afraid.

With ears popping, Julian pushed his little 4-cylinder up past the tree line, occasionally stopping for some precarious picture opportunities. The switchbacks started to become steeper and steeper, seemingly folding back on themselves; all the time crisscrossing a mountain stream that plunges into the invisible valley below. A sudden wrong move or blow out up there is not worth thinking about. What this must be like in winter is too scary to dwell on!! 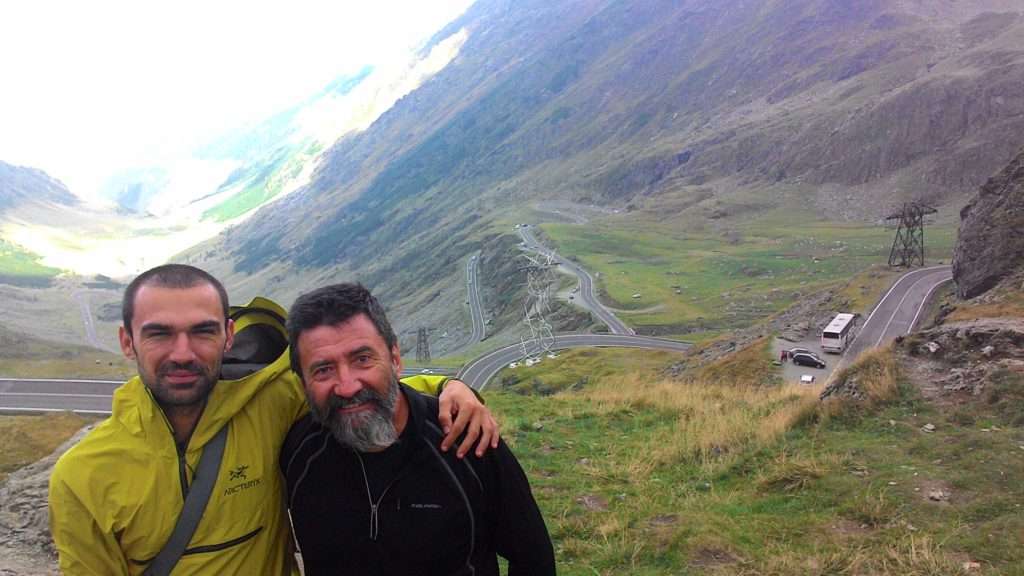 Top of the Transfagarasan Highway

At the top, there was barely a parking spot left as niggly Romanians challenged each other for the smallest space. We managed to fluke a place and alighted from the car, thankful to feel firm earth under our feet again. It was freezing! The cold wind cut right through us. The chill was settling in, and we figured we’d better get moving to climb to the viewpoint on a well-trodden path. Minor catastrophe – my camera battery died right at the critical point. The extra one was back in Brasov on charge! Doh!! I did take some shots on the way up, so not all was lost. As we stood staring back at the snake-like switchbacks, I thought it seemed like cheating to drive up here rather than ride. But as I processed what an effort that would have been, I figured I’d live with the decision!! 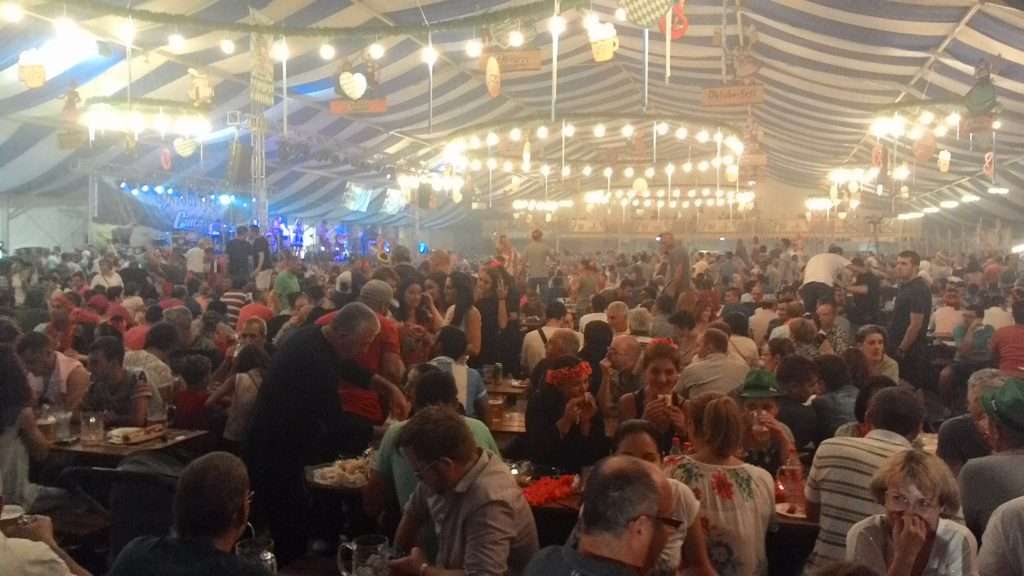 Octoberfest – Brasov. All going on just across the street! Sleeping was optional!

Our introduction to the Carpathians had made Brasov one of the highlights of the trip so far. The mountain scenery was a nice change from the flatlands that we traveled through up til now. We weren’t too concerned that we hadn’t cycled the dangerous mountain roads.  We reason that our bikes are a means to an end. They’re challenging enough for us at the moment without us needing to ride them fully loaded up over mountains. They will travel with us on the train to Bucharest and then get put to gainful employment once again.

Note: This post is now available as a GPS Guided Travel App. Get the most out of your visit to Brasov and DOWNLOAD it for free HERE.