A lesson in hospitality. Turning things around

I’m digressing a bit from the sequence of the trip to highlight a powerful lesson in hospitality. Mother Nature has continued her challenging ways and the actions of one small guesthouse, in the middle of rural Latvia, turned a grumpy, potential complainant into one of their biggest fans.

And ice rocks fell from the sky

I’ll start the day before to give you a better idea of the context we are working with.

As we cycled out of Riga after three bright sunny days, we could see some very ugly black clouds building on the horizon in the direction we were headed. They had an eerie tinge of green that usually means more than just a little rain.

The “bike path” towards Jurmala on the coast is a little confusing but Tim had studied well and once we’d found the Botanic Gardens, it was pretty straight forward. As we reached the turn off to the path along the rail line (at the Neste Oil Station) the temperature dropped a good few degrees and thunder cracked above us. There wasn’t much cover at the service station but we’d spied a shopping centre a few hundred metres in the opposite direction. That seemed our best hope for shelter so we headed over quick smart. No sooner had we parked the bikes and headed inside a nice cafe, when the heavens opened with torrential rain and a bucket of hail. 2 coffees, a snack and about 90 minutes later and the sun was shining again…

Handy Hint: There is a bicycle mechanic’s shop just before the Neste Service Station where you turn left and head towards the path along the rail line.

We picked up the path and headed out, all the while with an eye on another big black cloud bank heading in our direction. Pedal to the metal, we smashed out another 10 km before screaming to a halt in a railway station as the heavens opened up once more. Once again it wasn’t just rain falling, there were some pretty big chunks of ice mixed in. 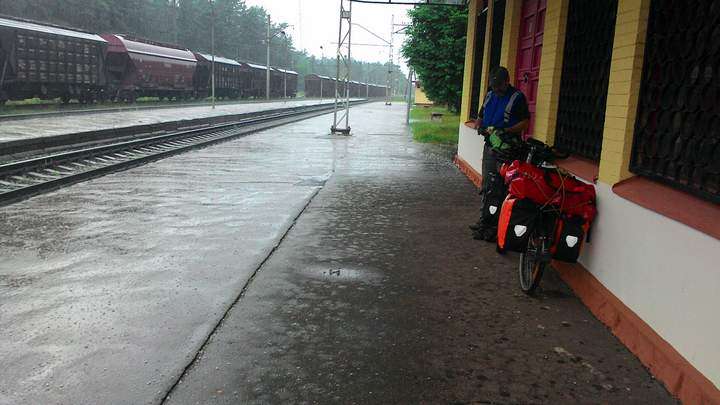 More ice rocks…Wed just made it to shelter.

An hour later, with the sun trying to make an appearance, we headed off for the final 10km, visited Tourist Information and parked up in a local cafe before the next major storm. This time is was a full three hours before we could head off again. During this period we’d decided on staying at the campsite furthest out of town to give us a 8km head start the next day.

Before heading out there we did a tour around the city and beach. It’s actually lovely and perhaps we should have come out and stayed a day or two. Lots of nice cafes, a pretty good beach and nicely maintained old buildings. 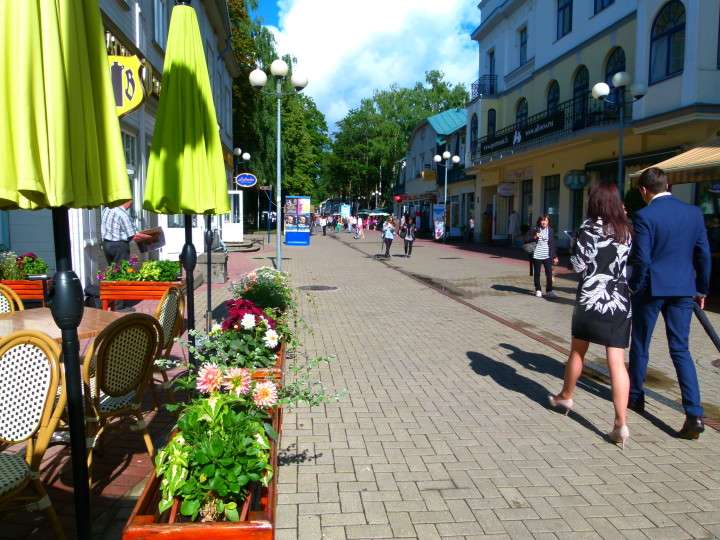 The sun made an appearance and Jurmala shone. 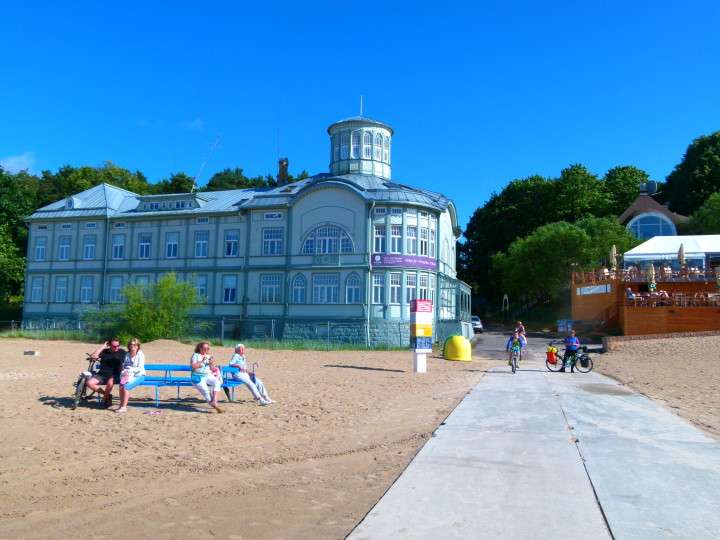 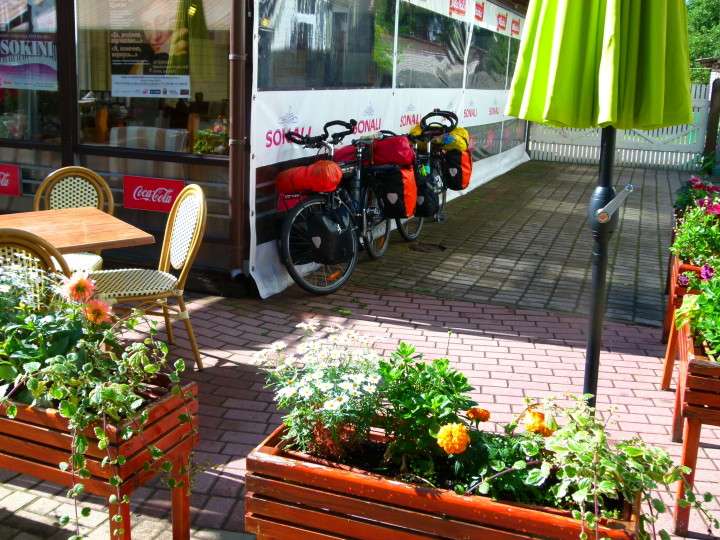 Lots of nice cafes and loads of colour

With still more rain on the horizon we booked one of their cabins for 28 Euro (larger than the 23 Euro but still no bathroom). We were giving the budget a hiding but wouldn’t really care if we were warm, fed and dry and had a decent sleep. Not bloody likely.

We spent the entire night in our sleeping bags with earplugs pushed so far in I was unsure I would be able to dig them out in the morning. Their phones started going off before 6.30am. Needless to say there wasn’t a lot of sleep had.

Tim had been feeling nauseous and achy the day before and I woke up feeling really crappy. Nausea, lethargy, aches and pains. But we were anxious to get away from the “camp of horrors”and be on our way. We had an 80km ride ahead of us and the weather was meant to deteriorate by 3pm.

4. The Traffic and Road conditions 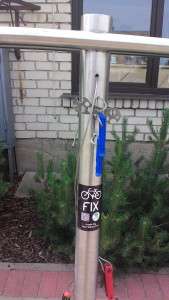 Need to fix your bike? Bike tools and pump at the Tukums info office

There was a bike path all the way to Kemeri, but after that we were on the highway for almost 20kms to Tukums. There was little to no shoulder on the road and the traffic was thick and fast. In the end we took a detour via Smarde. which was a good idea traffic-wise but the road was pretty awful in places. We finally had a coffee and breakfast at a little cafe (Upesloki) in Milzkalne 5kms out of Tukums. It was really good food but it was all I could do to keep it down.

After Tukums we headed out along Talsu Iela (the local “bicycle route” 4) to avoid the highway.  This was without a doubt the hilliest part of our trip since Norway. We definitely need some hill training but, as I said, I wasn’t feeling my best. About 5kms before Pure we had to rejoin the A10/E22 highway. Neither the shoulder or traffic had improved any. This continued until we could safely turn off onto the P130 towards Kandava.

By the time we rolled into Kandava, the wind was howling, the temperature had dropped and black clouds hovered over us. We had planned to go through to the Campground around 8km out of town but it seemed like a bright idea to stop right where we were.

We camped up at the very nice Pils Restaurant just as the heavens opened once again. By that point we had decided to get a room in town. The big problem was everything was booked out…! The only room available on Booking.com was at Plostkrogs, about 500m past the camp where we were originally going to stay. The weather site promised there would be a break in the rain by 5pm. I booked it! A confirmation of payment was in my inbox within seconds. Wheww! We settled in for the next 2 hours, had a fantastic meal and waited out the rain.

The first element of doubts was when I got back onto the site to show Tim the map. It said the last room had been booked out 5 hours ago, and yet I had just booked 5 minutes beforehand! A glitch in the system perhaps. 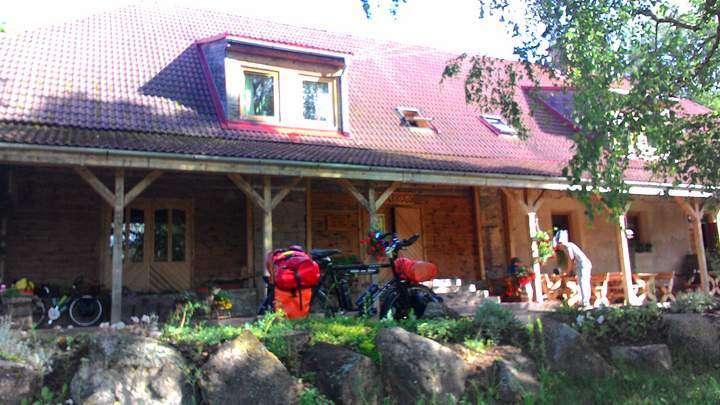 True to form, the rain stopped and we jumped on the bikes. 45 minutes later we rolled into the very lovely Plostkrogs. It’s a gorgeous, 17th century tavern on the Abava River and apparently very popular. The restaurant was full and the car park and playground was heaving with motorbikes, cars and kids.  I went inside and explained to the girl we had made a booking a few hours beforehand. After checking the book, and muttering something about “a problem” she asked me to wait and went back into the kitchen with a look of panic on her face. Not a good sign. It was obvious the booking hadn’t gone through for some reason. But the cheerful lad behind the counter told me we could stay in the other building…? 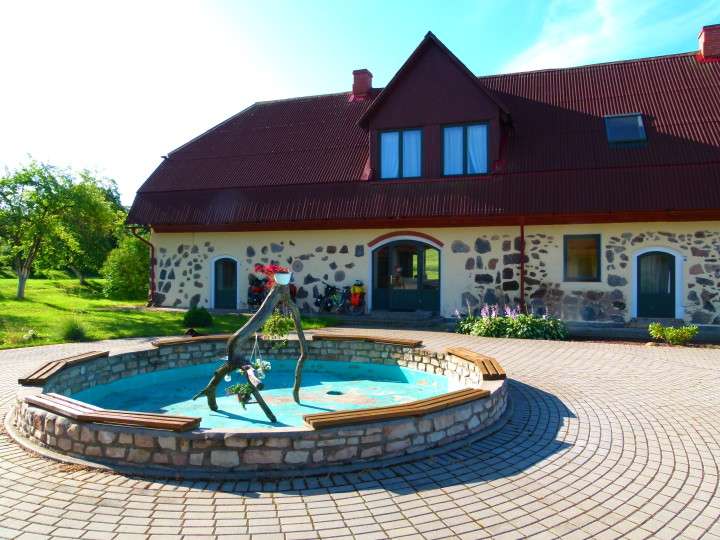 The other building…Not too shabby either!

The “other building” was 800 m up another road in a quite lovely manor house. The room was massive, very clean and comfortable and had a beautiful outlook onto green rolling pastures. There were no other guests and we were starting to think we’d really landed on our feet here. All we needed was a hot shower, and a quiet night watching a bit of TV and some time on the internet planning our trip further on.

Unfortunately, because I really don’t think we were expected, the hot water service had to be turned on and heat up. When I tried the TV, there were no channels. And…the internet didn’t work! I had a small amount of credit on my Finnish SIM card and I still had the confirmation info on my phone. A call to the restaurant had the owner over in about 5 minutes flat.

I have to say, once Uldus, the owner, (I’m not sure of the spelling) understood the issues he went all out to correct them. (And perhaps I might have been just a little bit cantankerous!).

His first, and quite reasonable, option would be to take us back over to the restaurant in his car. We could have some free drinks and snacks and use the internet there. Grumpy Sharyn wasn’t having any of it. We were tired, weren’t hungry (true because we’d not long had a huge meal at the pub in town) and hadn’t had our shower yet.

The caretaker would be back by 8 and she could give us internet access. The hot water would be hot soon. Are we sure we don’t want to just come back to the restaurant? No! I was happy to wait til after 8 (another hour or so) if it would be sorted then.  Was there anything else he could do for us?? Food, drinks?…By this stage I was actually feeling a little embarrassed at being so grumpy. He appeared so mortified everything wasn’t perfect for us I relented and told him he could bring us back a couple of beers when he returned. 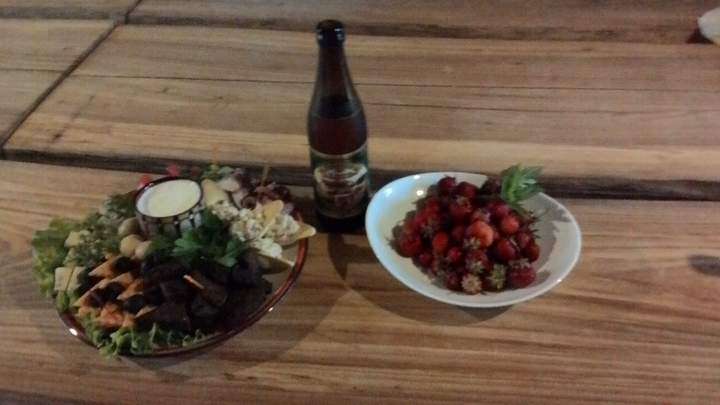 Who could stay grumpy when presented with this.

Much to my surprise Within 30 minutes, he’d returned with one of his team Nauris, a laptop and a modem to try and sort things…And, he had 4 cold beers, an amazing platter of local delicacies and a big bowl of fragrant, juicy strawberries. How could you be annoyed with that?  Not only that, the water was finally hot enough for two delicious showers. All was right with the world again!

All was right with the world again! 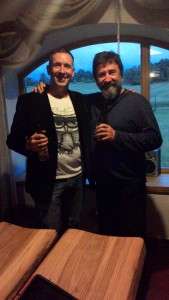 He stayed and chatted for a while before heading back to his very busy business. The fact that he cared and had made time for us meant lot. Tim shared a beer with Nauris who had to return to work but then came back to see if everything was OK and share some local information (with another 2 beers!).  It was. We’d made progress on the Belarus visa issue and sorted weather and general stops for the next few days. That night, we had a very comfortable and quiet sleep, sorely needed considering the night before. The next morning when we went over for (an amazingly delicious) breakfast, Nauris got up on his day off and showed us around the historic property, advised us on which road to take and generally made us feel like old friends….

So there you go….What started as a down day, ended up as an excellent local experience. All because the owner and staff took the time to care. So if you’re in the area, do drop in and visit the guys at Plostkrogs (which means ‘Ferry Tavern’). It’s a unique building with lots of history, great food and wonderful owners and staff. If you’re going to book a room however, do it well ahead. They are extremely popular and online bookings systems sometimes do have glitches. 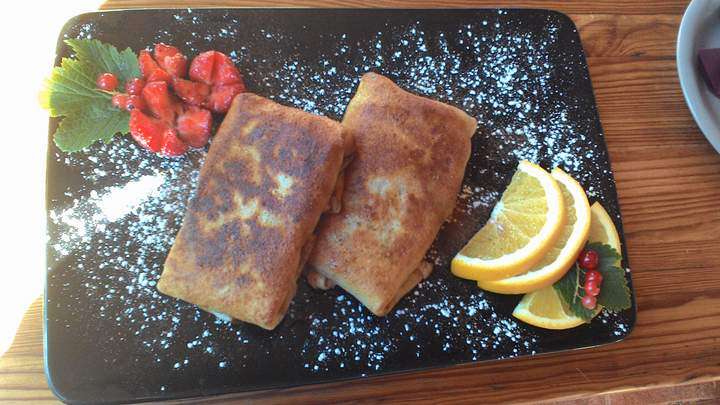 Have you ever had someone turn your day around just by going caring about you as a guest and going over and above the call of duty? Let us know how they made everything OK again in the comments below.