A Dutch Legacy and a Decent Beach – Galle & Unawatuna

As much as we loved Hikkaduwa, we had to move on if we were to get to the rest of the Island during our stay. The UNESCO World Heritage-listed Galle Fort was just down the coast so we headed down for a few days. 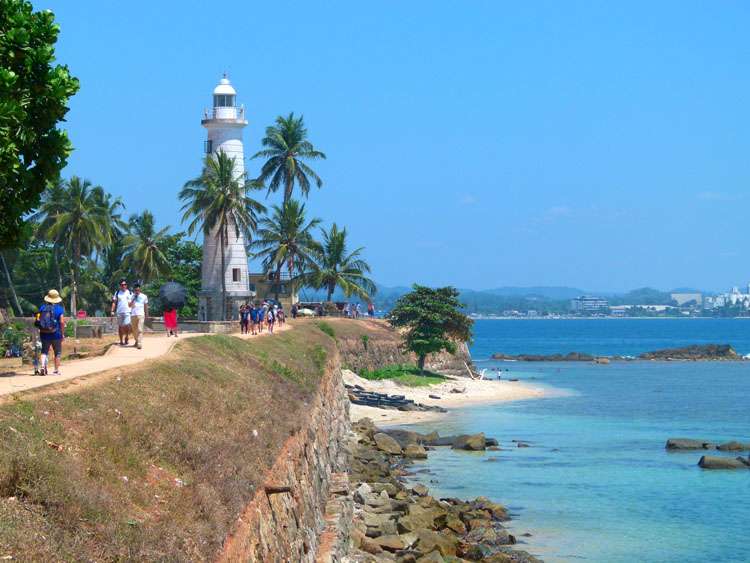 Roshan (from the guesthouse) drove us the 30kms or so down to Galle (pronounced “Gawl”) in his tuk-tuk (for about 10AUD$). He had to earn it though, as the hotel we’d booked through Expedia was almost impossible to find. We drove around and around in circles, asking several people before we finally could contact the owner. We’d driven past the tiny lane it was in 3 times, there was no signage at all! 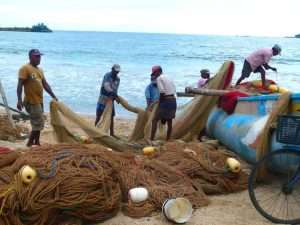 When we booked the Chinese-run guesthouse (there’s lots of Chinese in Galle for some reason), we had assumed we were paying SL Rupees, apparently not! The booking site was in Indian Rupees, almost double the price, and we had booked four days as Sharyn had lots of writing work to do. We won’t fall for that one again!

The Panda Guesthouse was clean and tidy though and had AC and fan, and we had a balcony as well (although it overlooked a ramshackle yard full of overgrown weeds and rubbish). It also had an open common room area which was perfect for writing. 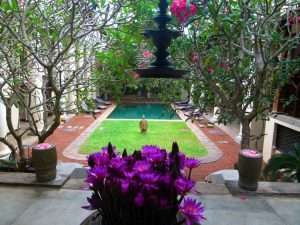 Stay in luxury inside the fort.

We soon headed down to Galle’s most famous attraction, the old Dutch Fort. Inside its impressive walls lies an extensive old town with many of its original colonial buildings restored back to their previous glory. Some of the heritage hotels are straight out of a movie set, with ornate ceilings, chandeliers and tilework. Thick, white walls divide the lounge areas from the restaurants and traditionally dressed waiters with white gloves carry silver trays with drinks to your table. Parlour palms soften the corners, and wooden ceiling fans move the warm, moist air over large, rattan chairs below. One look told me we couldn’t afford this place! They were kind enough to let me take some photos though. 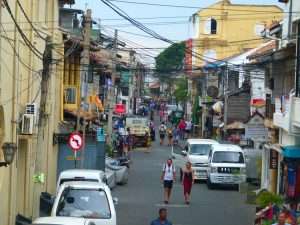 Daytrippers fill the streets during the day

The narrow, cobbled lanes of the old town were full of daytrippers. They ambled around like zombies standing in the doorways of souvenir shops and small restaurants and cafes, confused by the plethora of choices. They would stay to watch the sunset then scramble back to their buses parked on the outside of the walls and head off to wherever they came from.

Shazz and I settled for a few beers and something to eat back down on the waterfront esplanade nearer to where we were staying. 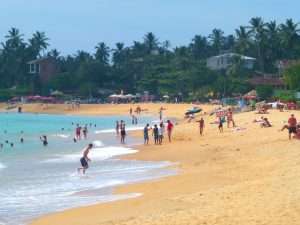 After a morning of work, we took the local bus down to Unawatuna beach about 3kms down the road from Galle. We enjoyed a lovely lunch under an umbrella on the sand, then wandered down to the other end of the beach and found a place to settle for a few beers and some people watching. Apart from some locals enjoying the sun and sea, the area is populated mostly by Europeans and Russians. Not surprisingly, beach attire is limited to Speedos for men and barely there Brazilian style bikinis for the ladies, exposing most of their behinds (not the worst thing I’ve ever seen though!). The bikinis are becoming more popular in Australia now too, but the “Dickstickers” went out of fashion in the 70’s! (come on guys, seriously!). 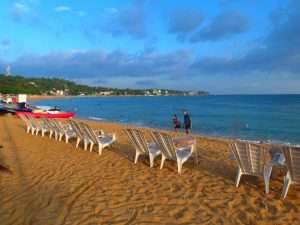 Plenty of room for chilling out.

The lanes behind the beach are full of hotels, guesthouses, restaurants, cafes, souvenir shops and small deli’s. Once again, it’s a self-contained tourist area with everything you need. The beach is OK for swimming, and the water seems clean enough. They also run diving courses and trips from outlets on the beach.

We got the bus home again and headed to the wine shop. Deli’s and small supermarkets don’t sell alcohol here in Sri Lanka. You have to line up at a heavily fortified wine shop (a couple of barred windows) to get a beer outside of a hotel or restaurant. You often have to jostle for position at the window as well; the locals are pretty keen to get served!  Not all restaurants sell alcohol either, especially the local ones. Fortunately, the reception has a fridge, so I could buy a couple of bottles and put them in to keep cold. Most of the refrigerator was full of food, as the other guest are all Chinese and like to cook for themselves. 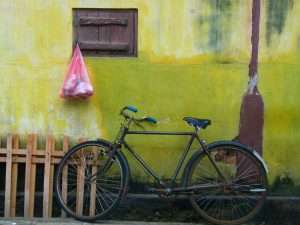 All you need to get around Galle Fort.

The next day we wrote all morning again and returned to the Fort in the afternoon. We found a restaurant with an upstairs area where we could have a few sundowners and watch the sunset. Here we met Pete and Vanda, a couple from Oxford who owns a brewery there. They were coming the opposite way, so we exchanged info on what to do and where to stay. Just like the old days and it beats the shit out of the internet.

On our last day in Galle, we returned to Unawatuna for sunset beers and some dinner and took an over-priced tuk-tuk home. We bargained him down, and he grizzled the whole way. Tuk-tuks are a rip-off compared to Colombo. There they are metered (mostly) and cost less than half of the unmetered ones down here on the coast. You need to bargain hard before you get in, we’ve knocked back several already who were just taking the piss! 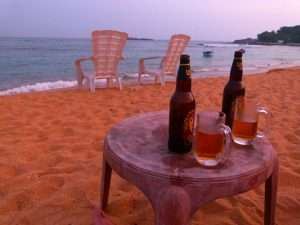 If you can forget the ubiquitous crows, the mangy dogs and the greedy tuk-tuk drivers, Sri Lanka has been great so far. The people are exceptionally warm and helpful. Just learning a few phrases and some cricket history will open up doorways to the locals like nowhere else. Food and beers are relatively cheap, and the beaches are generally clean and postcard perfect. Lots of people speak English, and the word “exotic” is certainly not wasted here in describing the place.

Southern Sri Lanka with its surf beaches and palm-studded rice paddies is a photographer’s dream. Beach culture is relaxed, and sunset drinks are a rather introspective time to reflect on the natural beauty around you. Missing are the techno beats of a thousand “Bob Marley” bars associated with South East Asia. Sri Lanka is altogether a rather chilled out place! 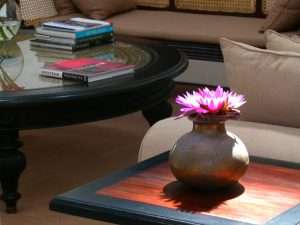 Some great places to stay, eat and drink in Galle Fort.

Galle city itself has little to write home about. If you’re staying down this way, find a place inside the Fort itself, or, stay in one of the many beach places 3kms down the road at Unawatuna. Both these places are loaded with amenities for tourists.

Stay for dinner inside the fort. All the daytrippers leave by then, and you can wander the small streets in comfort.