Craft Beer and Fab Food at the Siem Reap Brewpub 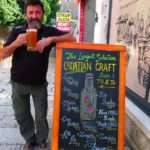 Any place with craft beer is a good place for me!

Anyone who follows us on this blog or my Ho Chi Minh City site knows that both Tim and I love a good beer and it doesn’t even need to be on a hot day. Our excitement at the emergence of craft beer in our favourite part of the world, South East Asia, is all too obvious on our Instagram and Facebook pages and I’ve had had at least one article published in an international publication.

So when I recently paid a visit to Siem Reap last month (sans Tim), I was very excited to see they also had a new brewer who not only makes the beer on site but also pairs their menu to match the unique taste of their range of beers. Siem Reap Brewpub is the only craft brewer in town and well worth a visit for lunch or dinner. The food is divine, and the beers are excellent… 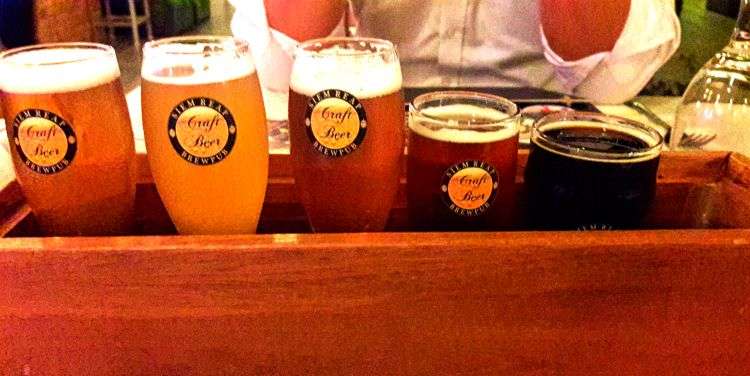 A flight of beers – cheers

Handy tip: it’s just around the corner from the Siem Reap Foreign Correspondents Club. So you can do sunset cocktails there and then make your way around for dinner….which is precisely what I did.

The Brewpub offers a choice of alfresco or inside dining. Siem Reap in December is very mild, so I chose the outside option. Comfortable lounges surround an attractive water feature, providing a relaxed but sophisticated ambience. Everyone there seemed very chilled out and were enjoying themselves immensely. Despite the fact the restaurant can hold 240 people, it still had an intimate atmosphere. 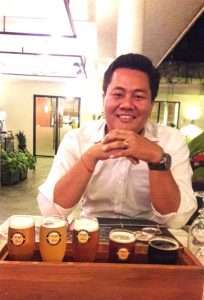 If you’re trying a new brewer, I think it’s a good idea to select a beer flight with a sample of brews first up so you can work out which is your favourite.  I was fortunate to run into the Manager, Mr Vanna Sreng, who helped guide me through the different beers and suggest the best food to accompanying them.

* ABV = alcohol by volume and indicates the strength of the beer.

** SRM = the colour system used by brewers to specify finished beer and malt colour. The higher the number, the darker the beer.

*** IBU = International Bitterness Units scale, a gauge of beer’s bitterness. IPA’s and double IPA’s, for example, have much higher IBU than a wheat beer.

Each of the dishes on the menu has a touch of beer, giving them a unique flavour and helping to match the food with the brews on offer. The blonde Ale frog salad sounded delicious, and it was, teamed perfectly with the Blond Ale and the Golden Ale. 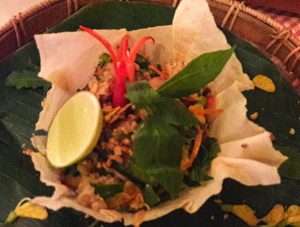 Next up was possibly the best steak dish I’ve ever eaten. Sizzling steak, with a touch of chilli, basted with black beer. The aroma as the beer was drizzled over was incredible, and the meat just melted in my mouth. Yum. The dish is quite large, so there’s plenty to share with a friend or two if you want to try a selection of dishes.

Each of the beers had a distinctive palate, but all of them were good. The blond ale was light and refreshing with floral overtones. The golden ale was a touch maltier and very smooth. The IPA was quite different from the other beers, striking a balance between maltiness and hoppiness. The black beer was chocolaty and creamy, and the Saison had a hint of lemongrass, with a peppercorn aftertaste on the back of the throat. All in all an excellent range of tastes and flavours and matched with the food, kicked a goal for me.

The Siem Reap Brewpub opened in April 2015 and has built up a loyal following of locals, along with a good crowd of discerning visitors. The beers are made with quality hops from Australia, New Zealand and the USA, and malt from Germany, but many of the other ingredients have a local spin, like lemongrass and green Kampot pepper. The brewing process is all natural, and the beers contain no preservatives. 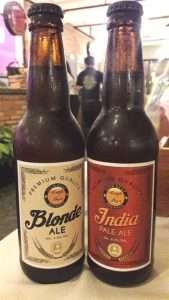 The Blonde Ale and IPA are available in bottles as well as on tap.

Their popularity has grown so much, the beers are now available in over 20 restaurants around town, including the Amansara,  Phum Baitang, and Raffles, which boasts one of the first restaurants in Siem Reap. Tour groups are starting to make it a regular stop and the beer has recently won medals in Germany which doesn’t surprise at all.

Not only does the Siem Reap Brewpub produce excellent beers but they also support the local economy, especially the local farmers who provide most of the ingredients.

Disclosure: I did not receive payment for this review (or any other on this site unless I have fully disclosed the fact.) I did, receive the beer flight and food gratis, BUT the freebie did not influence my  review in any way, shape, or form. Had it not been wonderful I would not have written the article at all. Scout’s honour!
I also receive a small amount of money by allowing advertisements on the site and any purchases made through those links.