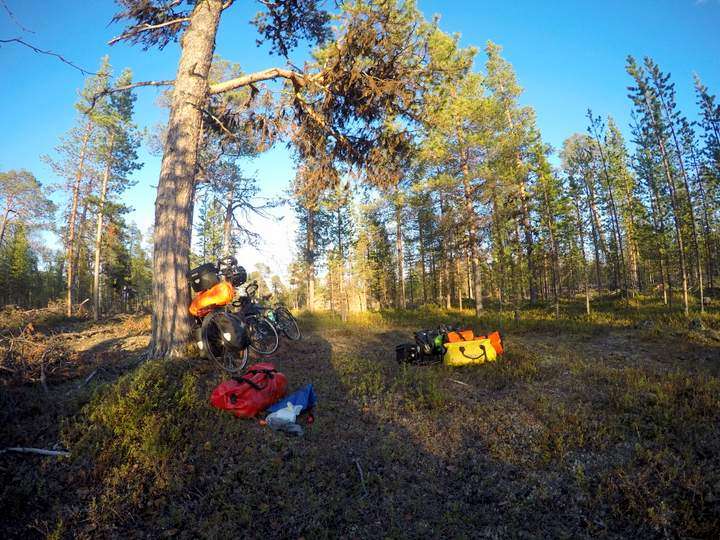 Another gorgeous wild camp above the Arctic Circle.

After successfully cycling from Perth to Brisbane in 2013-2014, we decided we were ready for a tour further afield. Impressed by the ever-growing selection of Eurovelo cycling routes we decided to tackle parts of the longest one – Eurovelo 13 with a few deviations to pick up parts of the world we still hadn’t seen. – Starting in Norway in the Arctic Circle, we worked our way down through Finland and the Baltic States before heading further east to depart the Schengen Zone and explore Belarus, Ukraine and Moldova. We then headed back to Romania, Bulgaria and onto the Balkans.

We are both in our 50’s, and when we started this trip we were even more unfit, overweight and did less training than even our first adventure. You think we would’ve learned by now. But no..!

Despite Mother Nature throwing us a few curve balls, visa complications and less than favourable cycling conditions in some of the countries we visited, it was still an amazing experience, and we’re already planning our next extended trip, starting April 2018 through Canada and the northern states of the USA.

We hope you enjoy our journey. Let us know in the comments below.

Heating up in Helsinki – Our last stop in Finland – Helsinki

A Lesson in Hospitality. Turning things around – Riga to Plost Krogs via Jurmala & Kandava

Heading to where the Wind is Born – PlostyKrogs to Skuodas (Lithuania) via Kuldiga, Aizpute, and Leipia

The Last of the Baltic States  – Skuodos to Vilnius via Kretinga

How to obtain a Belarus Visa in Vilnius – Vilnius

The Mysteries of Minsk – Minsk, Belarus

We abandoned the bikes in Moldova – Moldova

Roamin in Romania  – Iasi to Brasov via Roman and Bacau.

Memorable Montenegro – Montenegrin coast including the Bay of Kotor

Adoring the Adriatic (on Touring Bicycles) – Part 2 – Korcula and Hvar