For a girl that doesn’t like heights, I have to say I’m pretty damn chuffed with myself. Anyone that shakes at the knees and feels faint looking out a 10-storey window will understand. If you’d told me I could fly through the jungle, 50 metres above the ground, suspended only by a cable, attached to a couple of trees, I would have said you were nuts. But I did it, thanks to Angkor Ziplines in Siem Reap, and it was INCREDIBLE!! 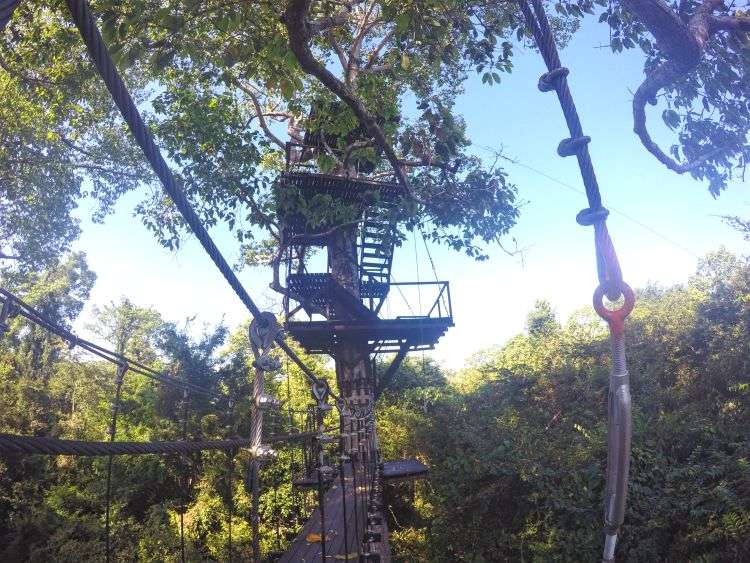 Yes, I had to climb all the way up there…and higher!! Ziplining through the jungle surrounding the incredible temples of Angkor Wat was the absolute best fun I’ve had in a long time. And if I took away one phrase for the day it’s “Safety First.”

Having not been particularly active over the past 18months in Saigon, and with the extra kilos to prove it, I was a little worried that I wouldn’t make the grade fitness wise OR perhaps would cause a significant equipment failure…How embarrassing would that have been? Thankfully all those dark thoughts were for nothing. There’s a 125 kg weight limit, and I met every physical challenge with aplomb.

Mongkul gives us a safety demonstration before we all set off.

Our group of five plus two guides was an amiable lot. A couple from Singapore, a lad from Taiwan, a lass from Vietnam and me, an ageing Aussie. Mongkul and Longdy were two lovely Cambodian lads with a wicked sense of humour and a serious approach to keeping us safe. The first step was to choose our safety gear and get it all on.

Harnessed up we listened attentively to a quick but thorough safety demonstration before heading to the first of the ziplines in Angkor Park. Check, check, and double check… Another safety instruction made sure everything was working and fitting the way it should be. And then….I was nominated to go first. Really??? I have to admit I did feel a flutter of fear in the pit of my stomach but I wasn’t about to let the youngins in on that. 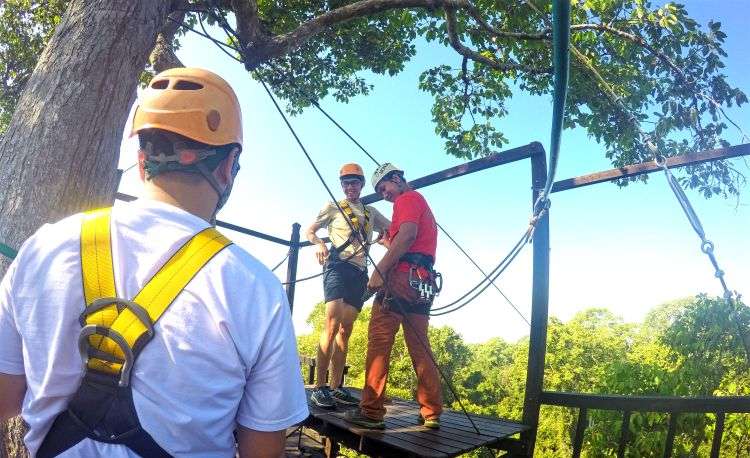 Leicester, getting ready to fly.

Staring over the edge of the platform wasn’t nearly as terrifying as I thought it would be. Thick foliage obscured the view of the actual ground. Logic told me it would hurt A LOT if something went wrong. But somewhere in my subconscious my brain was telling me all that lovely green would cushion my fall somewhat as I plummeted towards Earth.ne

Pulley on. Safety line on. Test the harness. Sit and let the webbing take your weight. Position hands. Push off and whooooossshhhh! The sound of the line pierced the quiet forest ziiiiiiiiippppppppp. I was flying, and it felt good. Within seconds I’d reached the other side, landing rather inelegantly and almost taking out the guide on the other side. High fives, I’d done it. As my pulse rate and adrenal levels dropped, I relaxed and watched the others take their turn. One by one they all landed safely, albeit with varying states of agility. We would get better, Mongkul assured us! 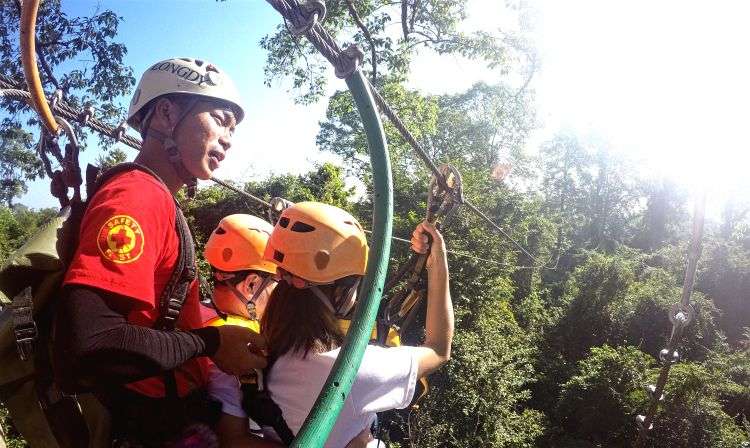 With ten zip lines and four sky bridges to conquer, the morning passed quickly. The ziplines gradually got higher and longer until we reached the piece de resistance at 50m high and 300m long. But by that time there was no longer any fear, just expectation of the adrenalin buzz as I sailed through the air. While there are a lot of steps leading to the platform, they’re not particularly steep or long, and there’s plenty of chance to take a rest in between. 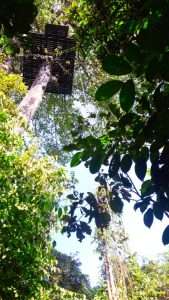 Throw yourself over the side and trust in the lines!

We arrived at the last platform, and I looked around. Where were the steps?? There appeared to be no way down. There obviously was, but I hadn’t spotted it yet. Then all was revealed as Mongkul and Longy started to weave a series of metal rollers into two hanging ropes. Straight down, hanging from a rope appeared to be the answer. Within a few minutes, the first couple were attached to the abseiling lines and were lowered over the side and skillfully delivered to terra firma.

High fives all round we posed for the obligatory celebratory pictures. On the short walk back, Mongkul explained a bit about the local flora and fauna, in particular, the family of rare Pileated Gibbons which live in the area and regularly visit the office area.

In high spirits, we returned the safety gear and harnesses and said our goodbyes. With all the adventure out of the way, we were all feeling peckish. Thankfully part of the deal is a delicious lunch near the main temple with plenty of time to get to know the other members of your group and swap photos and contact details. A good thing as my GoPro skills were severely lacking!! 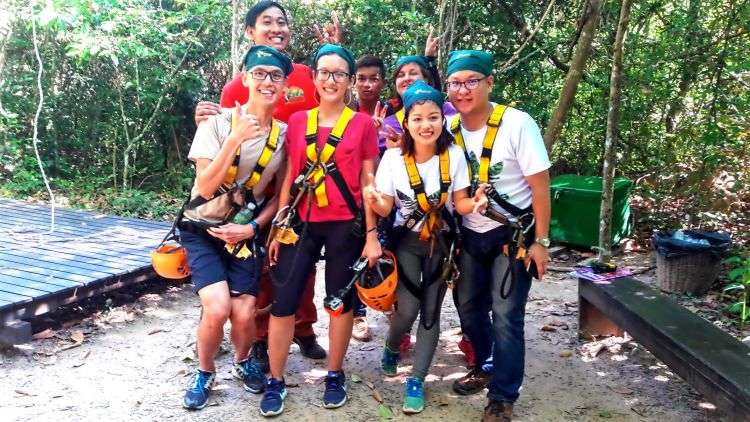 Want to watch the video. Of course, you do. Here you go..

The fact that there’s even a facility like this in a UNESCO World Heritage zone is something of an achievement. It took Todd Anthony and his partners almost two years and multiple meeting with the UNESCO committee to convince them that rather than harm the local environment, the structure would enhance visitor and local awareness and bring in valuable funds to support local community projects. The structure certainly is impressive and I didn’t feel like we were doing any harm at all to the surroundings. Quite the opposite. The guides obviously enjoyed their job immensely and tool great pride in making our experience as incredible (and fun) as possible, without sacrificing safety or responsible tourism practices.

Overall, an exhilarating and entertaining day out, and one I’d recommend wholeheartedly to family and friends.

Disclosure: I did not receive payment for this review (or any other on this site unless I have fully disclosed the fact.) I did, receive the full course eco-adventure gratis, BUT the freebie did not influence my review in any way, shape, or form. Had it not been totally freeking awesome I would not have written the article at all. Scout’s honour!
I also receive a small amount of money by allowing advertisements on the site and any purchases made through those links.